A fresh proposal has been put forward to build a white-water rapids facility in the city centre.

The €12 million plan for George’s Dock also includes a water polo and kayaking pool, as well as a swift water rescue training facility for the Dublin Fire Brigade.

It was first proposed to city councillors at the beginning of January, though the former lord mayor Nial Ring had commented at the time that he “can’t honestly support it at this stage” as the plans didn’t “add up”.

The Irish Times reports that Dublin City Council is now making a new attempt to get the green light following on from the recent local elections which changed up the administration. 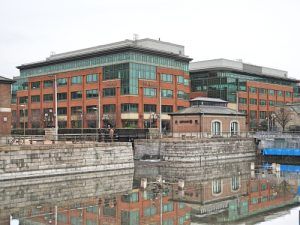 The dock, which is located between the IFSC and the CHQ building, was inherited by Dublin City Council by the Dublin Dockland Development Authority (DDDA) in 2016 and they have been trying to find a suitable use for the site ever since.

The proposal explains, 'The white water rafting course will be located around the edge of the dock with the swift water training facility located at the northern end of the dock and the pool located in the centre of the dock. The pool in the centre will be used for flatwater kayak training, canoe polo and water polo.'

Central to the facility will be a mechanical control centre which will house the infrastructure required to run the facility, while a pumping station and raft conveyor will be used to propel participants around the circuit. 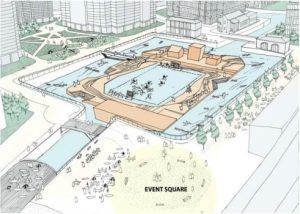 The nearby DDDA building on Custom House Quay would also be demolished to make way for the site’s offices as well as changing room facilities and a visitor centre.

The final date for submissions on the proposal is October 3, although the council will have the last word on whether it will go ahead.

READ NEXT: The Fat Fox Returns With A Brand New Coffee Drive Thru