The following is a guest post published with permission from the owner of Ouzos restaurant in Dalkey Padraic Hanley. You can see the original post here.

I recently had a guest in one of our restaurants complaining the price of our Fish & Chips. When I explained to him that everything else was free including the table, the cutlery, the chair, the water, the bread, the waiter, the chef, the kitchen porter, the rent, the rates, the insurance, the light, the heat, the music, the waste disposal, the wifi etc etc etc….He said “fair point, I never thought of it like that”.

So how have we come to expect so much for so little when it comes to dining out in Ireland?

The first thing I do every morning when I get into the office is check my email. First the bookings and then any other email that arrived over night. Before I move on I check the Daily Deals to see which restaurants have been signed up. Over the last 18 months the big name restaurants seem to have vanished from these deal sites and now I find myself using these deal sites to see who in the restaurant business is in trouble, because to me, nothing else makes sense. Daily Deal websites that charge up to 50% commission are not suitable for promoting restaurants, they are beyond expensive and that’s it! So other than the restaurant trying to raise a big lump of badly needed cash the Daily Deal for restaurants is daft. Unless of course you’re the guy in the suit with no intention of getting your hands dirty, all you have to do is sell the idea and get away with the cash before the restaurant realizes they have been screwed.

To start with, all the major studies have shown that a person who buys a discount voucher for a restaurant from a Daily Deals website is unlikely to ever visit that restaurant again. The return rate is less than 20 % and that is a fact. People who buy these vouchers simply move on to the next deal.

The problem with the current generation of daily deals sites, according to “How Businesses Fare with Daily Deals,” (a study lead by Utpal Dholakia of Rice University’s Jesse H Jones Graduate School of Management in the US), may be that there are too many sites and too little brand loyalty. The study, carried out between August 2009 and March 2011, discovered that, although 80% of deal users were new customers, only 35.9% of customers spent more than the deal’s value, with less than 20% returning to the business at a later date to make a full-priced purchase. In fact, 21.7% of those buying the deals online never actually get around to redeeming the deals at all. For the businesses participating in the deals, only 55.5% made money doing so (17.9% broke even, with 26.6% losing money). The most successful verticals were health, services and special events, with 70% of those being profitable, and only 43.6% of restaurants finding themselves in the black as a result.

So, if you are in the business of selling bracelets, then the decision to discount is easy. You know the cost of the item and you can decide on the level of profit you are prepared to accept to shift your stock. Restaurants by their nature are much more complex. In normal times, a well run mid-market restaurant will operate a gross margin (excluding Vat) of 70%. After staff costs of 38% to 40% and operational costs the well run restaurant would expect to show a net profit of about 7%

This is an example of how a Daily Deal Website works;

The restaurant get a great big cheque for €7k and all they have to do is produce food for the 800 people coming to dine!

So lets do the math’s for the Restaurant 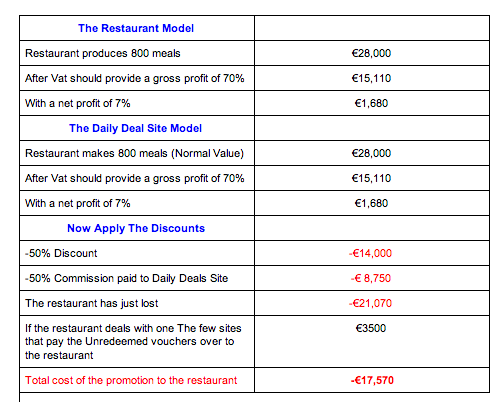 One very large elephant in the room that is never mentioned when the daily deals salesman arrives to sell his services is “VAT” Restaurants doing deals with these websites must remember to calculate the Vat element correctly or they could find themselves in hot water with Revenue at a later date.

A recent deal I spotted offered 2 main courses and 2 glasses of Prosecco for €20 in a Dublin restaurant. With this deal you could choose any main course from the A la Carte menu which were priced up to €18 and Prosecco was priced at €9. The deal was very well subscribed and they sold close to 2000 (and remember these are deals for 2, so that was 4000 customers on the way), a total take of €40,000. If I apply my calculations above to that deal, the cost to the restaurant was close to €75,000 while the Daily Deals Website made a cool €20,000. This is a very good example of just how scary these Deal Websites are! So the next time you see one of your favourite restaurants selling a half price meal on one of these Daily Deal websites, do them a flavour and don’t buy it, they will thank you in years to come.