This is bound to stir up some debate around the country.

Dubliners have been voted the funniest people in Ireland, according to a new survey conducted by Jurys Inn and Leonardo Hotels Ireland and UK.

Among the 1,000 Irish people surveyed as part of the study, Dubliners were voted the funniest and greatest according to almost a quarter of respondents.

Dubs were voted both the greatest (24 per cent) and the funniest (23 per cent) people in Ireland; while Galwegians were voted the most craic (18 per cent).

Folks from Galway were also voted the happiest with 18 per cent of the vote, narrowly beating out Corkonians (17 per cent). 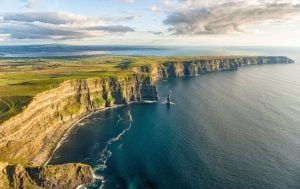 The study also looked into Ireland's iconic landmarks and found that the Cliffs of Moher were runaway winners with 67 per cent of the vote; closely followed by the Giant's Causeway, Newgrange and the Ring of Kerry.

Commenting on the findings, Suzanne Cannon, Head of Marketing at Jurys Inn and Leonardo Hotel UK & Ireland, said: "This research celebrates Ireland’s unique sights and people. Ireland is a one-of-a-kind destination, with the people at the heart of what makes it special and unlike anywhere else in the world.

"At Jurys Inn we embrace all of the country’s wonderful qualities and quirks and encourage all of our guests to stay happy no matter where their chosen destination is."