Dublin is getting a very special version of Love Actually next month.

It wouldn't be Christmas without Richard Curtis' iconic Love Actually and fans of the festive rom-com can avail of a cinematic experience with a twist.

Love Actually in Concert is coming to the Bord Gáis Energy Theatre on December 4, with a live screening of the movie accompanied by a full live orchestra.

Adding to the drama of the film, which features an all-star ensemble cast including Hugh Grant, Liam Neeson, Colin Firth, Laura Linney, Bill Nighy, Martine McCutcheon, Alan Rickman, Emma Thompson, Keira Knightley Rowan Atkinson and Martin Freeman, an orchestra will take on Craig Armstrong’s score from the film to give viewers a greater attachment to the experience. 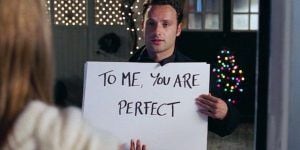 Armstrong is one of the best-respected composers in the industry, with his work being awarded a BAFTA for his Achievement in Film Music.

The return of Love Actually in Concert to the Bord Gáis Energy Theatre was announced earlier this year but there are still a few tickets remaining for the show, albeit with limited availability.

To get your hands on a ticket for the event, visit Ticketmaster.ie but you'll have to be quick as there aren't many left.