If only there was a similar outcome at the Tokyo Stadium 10 days ago...

Ireland could not replicate their historic victory over the All Blacks in Chicago when they met New Zealand in the Rugby World Cup quarter-final last week.

But for rugby fans who are looking to relive the moment that Ireland beat the dominant All Blacks for the first time in 111 years, we've got the perfect night out for you.

A play about the unforgettable evening at Soldier Field is coming to Dundrum's Mill Theatre and will premiere tonight (October 30).

The play, directed by Patrick McCarry, will follow six Irish fans and three players - Andrew Trimble, Rob Kearney and Conor Murray - in the lead-up to the match, as well as during the dramatic 80 minutes that will live long in the memories of supporters.

Soldier Field is one of three one-act plays that will take place as part of the latest Balally Players Theatre Group production and it will close out each of the next four nights. 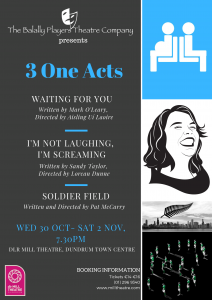 McCarry, who also wrote the play, said: "Over the years, I have interviewed All Blacks legends such as Dan Carter, Richie McCaw, Justin Marshall and more. All of them were acutely aware of New Zealand’s proud record of never having lost to Ireland. They have a phrase – ‘Not on my watch’ – but Ireland had been knocking on the door for a while and finally, in Chicago, they crashed through.

"There was incredible atmosphere, inside and outside the ground, that day. You had friends catching up that hadn’t seen each other in years, families reunited, grandparents meeting their grandchildren for the first time, illegal Irish, who can’t get home, finally getting to see friends and family after years apart.

"The game, in a way, was just the reason for these people to reconnect. An excuse to share time together and relive old stories. Win or lose, those are the moments that people remember, not just the 80 minutes. But winning sure does add to the feeling that everyone there that day has been part of something special."

Tickets for Soldier Field and the two other plays that are part of the night at dlr Mill Theatre are €16 (€14 with a concession) and are available to purchase at the theatre, by calling (01) 296 9340 or by visiting www.milltheatre.ie