The Bernard Shaw pub has issued an apology after an Instagram post caused outrage among their followers.

On Friday, as The Bernard Shaw prepared to re-open at its new Glasnevin premises, a social media post appeared on their account which seemed to mock those from the Northside of Dublin.

The backlash to the post was almost immediate, as the pub's social media followers criticised the apparent suggestion that all Northsiders were thugs. 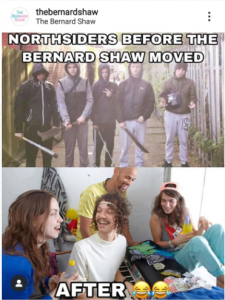 The opening night went ahead as planned but the pub has since apologised for the meme.

A subsequent Instagram post from the Bernard Shaw reads: "Hey folks, Sophie here from the Shaw. The post earlier was my mistake, it was just a meme that got sent to us which I thought was poking fun at us at the Shaw.

"I put it up mainly to show we can take a joke more than anything and being a Northsider myself (Donaghmede native) I shared it. Others didn’t so we apologise for sharing it & we have deleted it.

"Sorry for any offence caused, genuinely was not intended to be that. Sophie & Shaw Crew."