Johnnie Fox's has long been a go-to spot for celebrities visiting Dublin and with Comic Con taking place in the city over the weekend, there were plenty of stars wandering the streets.

One such person was American actress Charisma Carpenter, perhaps best-known for her stint as Cordelia Chase on Buffy The Vampire Slayer, as well as her roles on Charmed and Veronica Mars to name just a few.

While here, it seems Charisma made the most of her stay and she was very active on her Instagram over the weekend. She posted a pic of herself at Brown Thomas and another of herself taking a rest at the Convention Centre...

Down Kitty 🦁 . . . Living my best sweater life in Ireland. Just discovered the brilliant young Galway based designer, @colinburke_ at @officialbrownthomas I cannot believe how gifted he is! I just want to tell the world about this young lad who graduated design school and then learned to crochet via you tube! 🤯 Wha?!!!! I love how he took the traditional Irish crocheted wool sweater and made it into complex contemporary shapes. 🇮🇪👏🏼👏🏼👏🏼

No amount of coffee will do. 😴 🍀🇮🇪

It wasn't all lazing around though as Carpenter also found time to visit the Jameson Distillery, Merrion Square, spotted people having a dip and made her way up to Fox's over the course of what was a busy few days. 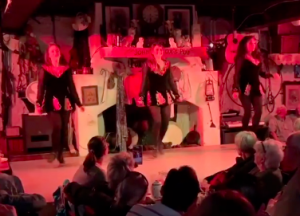 It's all depicted on her Instagram Stories which can be found here and she wasn't the only one enjoying herself in the city over the weekend. Pom Klementieff, who plays Mantis in the Marvel Cinematic Universe, was also posting images from around town.

Some weekend for the celeb-spotters, it has to be said.

REVIEW: Godmothered is the perfect watch for those waiting for a sequel to Enchanted