There have been a fair few celebs exploring our fair city as of late. First, Ariana Grande sent us into a frenzy when she visited a popular vintage shop in Temple Bar, stopped off in a hardware shop in Crumlin and popped into a wool shop in Walkinstown.

Then, the ladies of Little Mix were exploring various Dublin tourist attractions during their stay.

And now, it seems as though the faaaaaabulous Jonathan Van Ness (also known as JVN), has been busy exploring Dublin today.

The reality TV star, known for appearing as the grooming expert on the hit Netflix show Queer Eye, has been posting photos of himself around well-known spots in the city centre.

The star wrote on Instagram, "DUBLIN!! 2 Sold out shows tonite ?️‍?? I can’t wait to be back on stage telling JOKES HUNTY ??‍♀️??‍♀️" 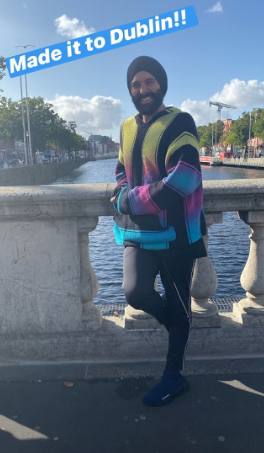 Derry Girls star Nicola Coughlin is clearly buzzed for him to be here and instructed him to "have your Taytos".

JVN is here to bring his stand-up comedy show to the Olympia Theatre tonight, putting on two sold-out performances.

He will first take to the stage at 7pm and then at 9.45pm. The second slot was added earlier this year due to phenomenal demand.