It’s that time of the week again, the weekend is tangible! Time to think about what Irish craft beer to try tonight. Look no further, go with the Craft Beer of the Week. You definitely won’t regret it. If you’ve been following this column for the last 2 weeks and have managed to try the last 2 beers already, then you’re definitely ready for this one. Over the last 2 weeks we went from a delicious pint of malty loveliness to an easy drinking “gateway” IPA. This week, things get a little more serious on the hop scale again, but we’re still talking easy to drink and lovely and balanced with a few surprises.

Blacks of Kinsale was founded last year with the help of an amazing crowdfunding campaign. Here’s their story in their own words: “Sam and Maudeline are a husband and wife team who started their brewing company Kinsale Craft brewery in 2013. This venture/obsession first began many years ago when Maudeline gave Sam a beer making kit for Valentine’s Day. What started as a hobby quickly developed into an obsession and thus through Sam's passion and enthusiasm Kinsale Craft brewery became reality. Living the dream since 2013. We want to escape the mundane of the mass market by producing beers with passion and personality.”

In order to make their dream a reality, they ran a crowdfunding campaign and gave away reward packs in exchange for money to help them set up. All the contributors were honoured on their “Wall of Fame” in the brewery: 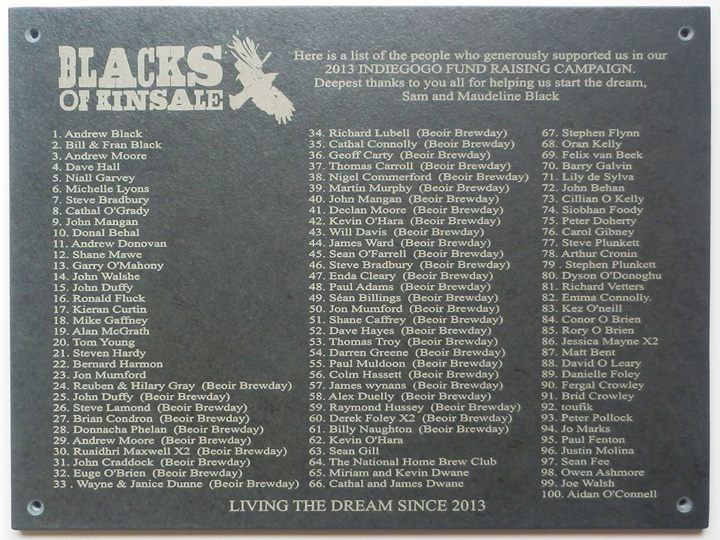 Thanks to these people, Blacks set up their brewery last year and have been brewing a delicious “Kinsale IPA” (KIPA), and their Black IPA (BIPA) ever since.

I came across them the first time at last year’s Craft Beer Fest in the RDS in September, to which they brought something amazing that immediately made it clear that these guys are all kinds of cool: a Hop Randall. It’s this contraption where the beer runs through a cylinder filled with fresh hops while being poured. It was amazing to experience the crazy hoppiness this added to the beer. From that day on, I made sure to keep an eye on Blacks, and I’m glad I did. 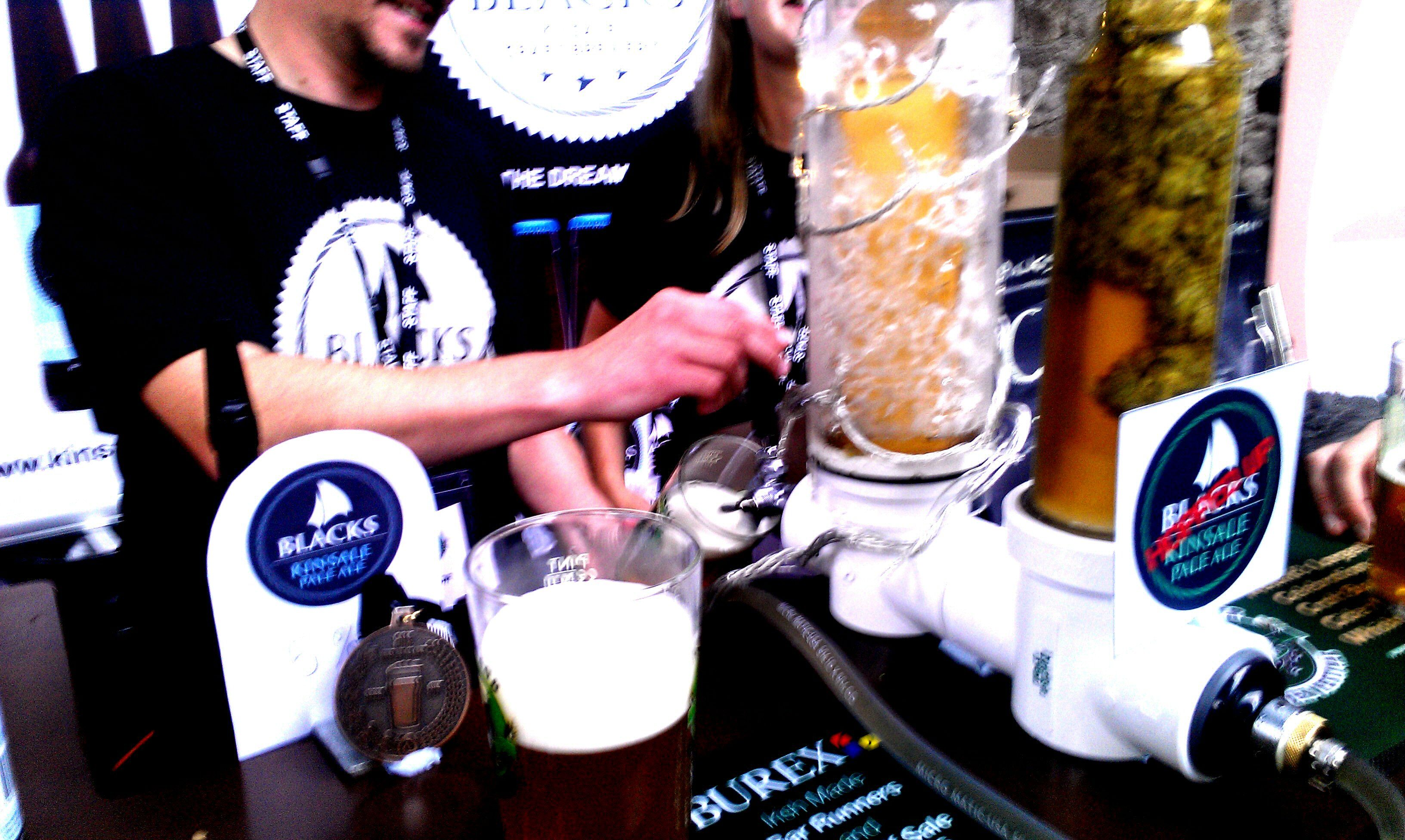 The Black IPA is the first of its kind made in Ireland, and it’s a very interesting type of beer. When you see it in a pint glass, you might confuse it for a stout at first glance. But it’s a totally different animal. It does pour almost pitch black with a hint of red if you look closely. The head is thin and has a cream colour. 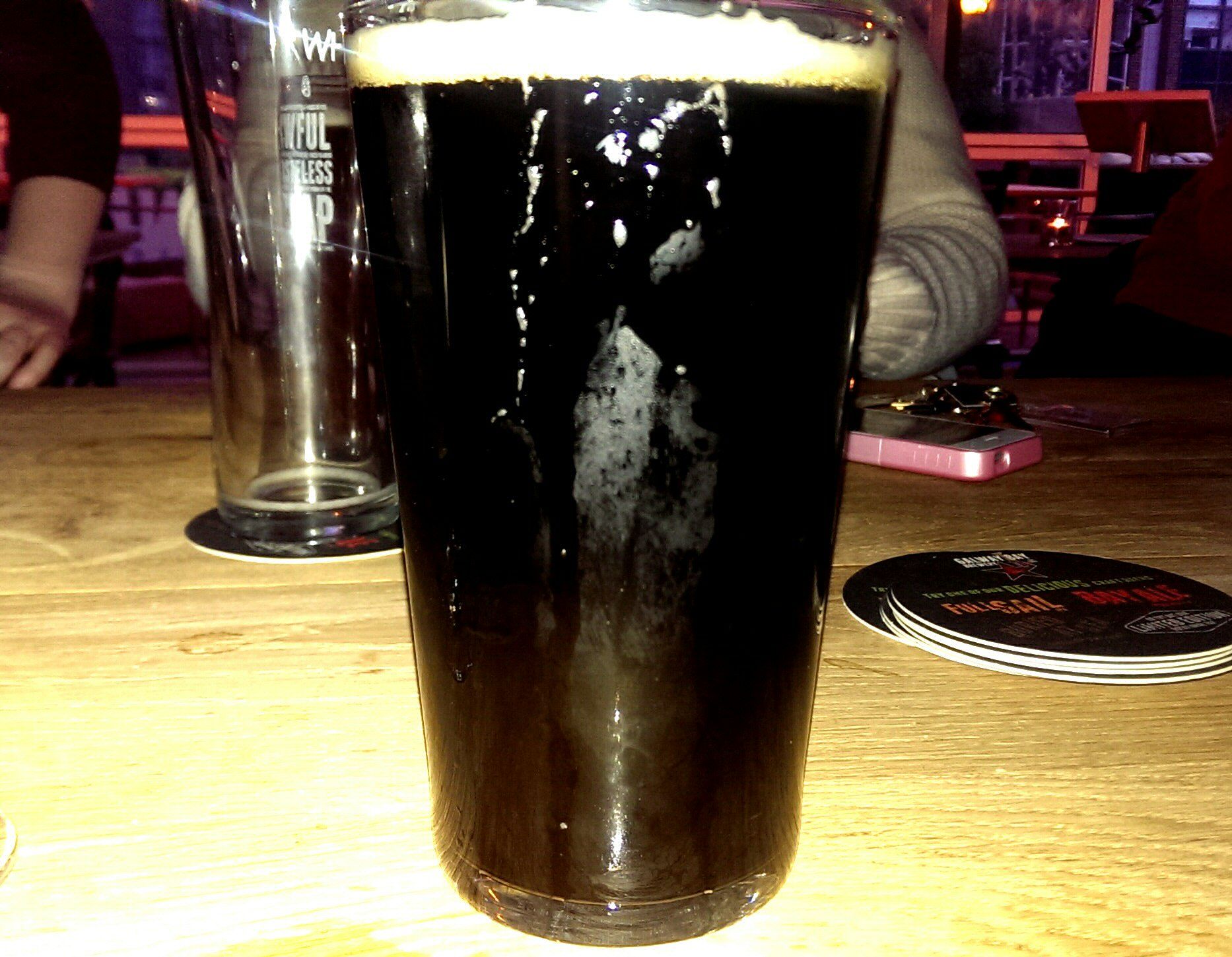 You would almost expect it to taste like a stout, but it tastes a lot lighter and hoppier than you’d think from looking at it. You might also think that it’s stronger than “normal” IPAs, but it’s only 5%. Ladies, don’t be put off by the colour of this brew. Trust me, keep reading and you will see why the Black IPA has been a favourite for all of us at the Dublin Ladies Craft Beer Society ever since it was launched.

At first, you taste the citrus notes you’d expect from an IPA. Orange is at the forefront in this one. But after a while when the beer has become a bit warmer, in comes the surprise: chocolate and coffee! These come from the malts and make this beer taste absolutely fantastic. It’s like a dessert in a pint, almost like a dark chocolate bar with orange and coffee in it. Don’t expect it to be sweet though, this is an IPA after all and as we’ve seen for the last 2 beers, the citrus and the malt balance each other out perfectly and create a lovely, not-to-sweet and not-too-bitter taste experience. It’s less carbonated than other IPAs, which makes the finish feel a little bit like a stout, lovely and smooth. So there you have it: Something that looks like a stout, but tastes like oranges, chocolate and coffee while being smooth and easy to drink at 5%. Believe me, this beer is amazing.

Around Christmas last year, Blacks brought out 5l mini kegs of the BIPA. Another first, which was met with so much enthusiasm that it flew out the door in the few off licenses that were selling it. Myself and the boyfriend were lucky enough to get one and let me tell you, between the 2 of us we finished it in a matter of hours. The mini kegs were a brilliant idea and I really hope that they will make a return very soon. 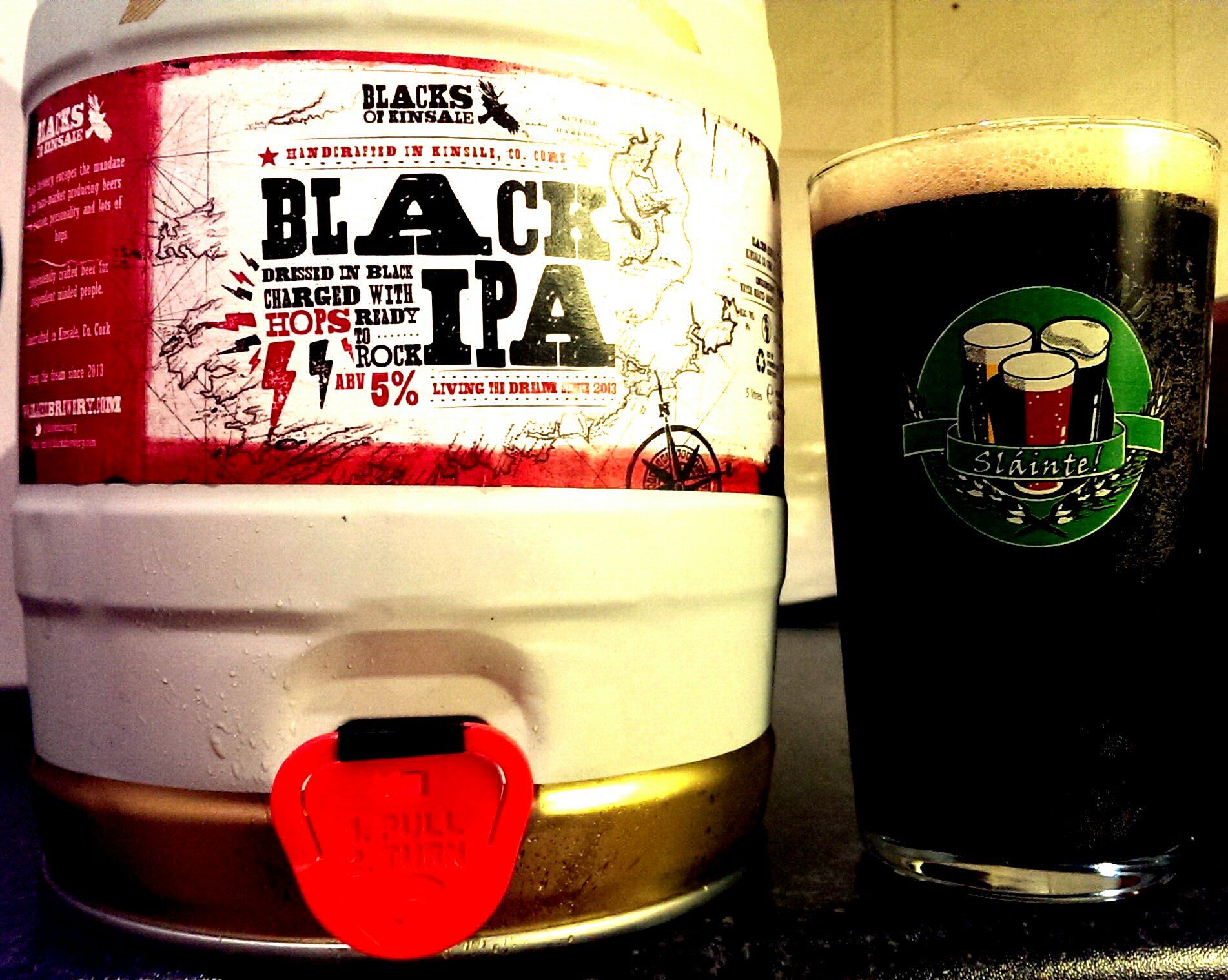 Black of Kinsale Black IPA is available on draught right now in Alfie Byrne’s and Farrington’s and in bottles from good off-licenses. You can check their website for a list of stockists and their Twitter to see where it’s on tap. Go on, give it a try this weekend and let me know what you think! 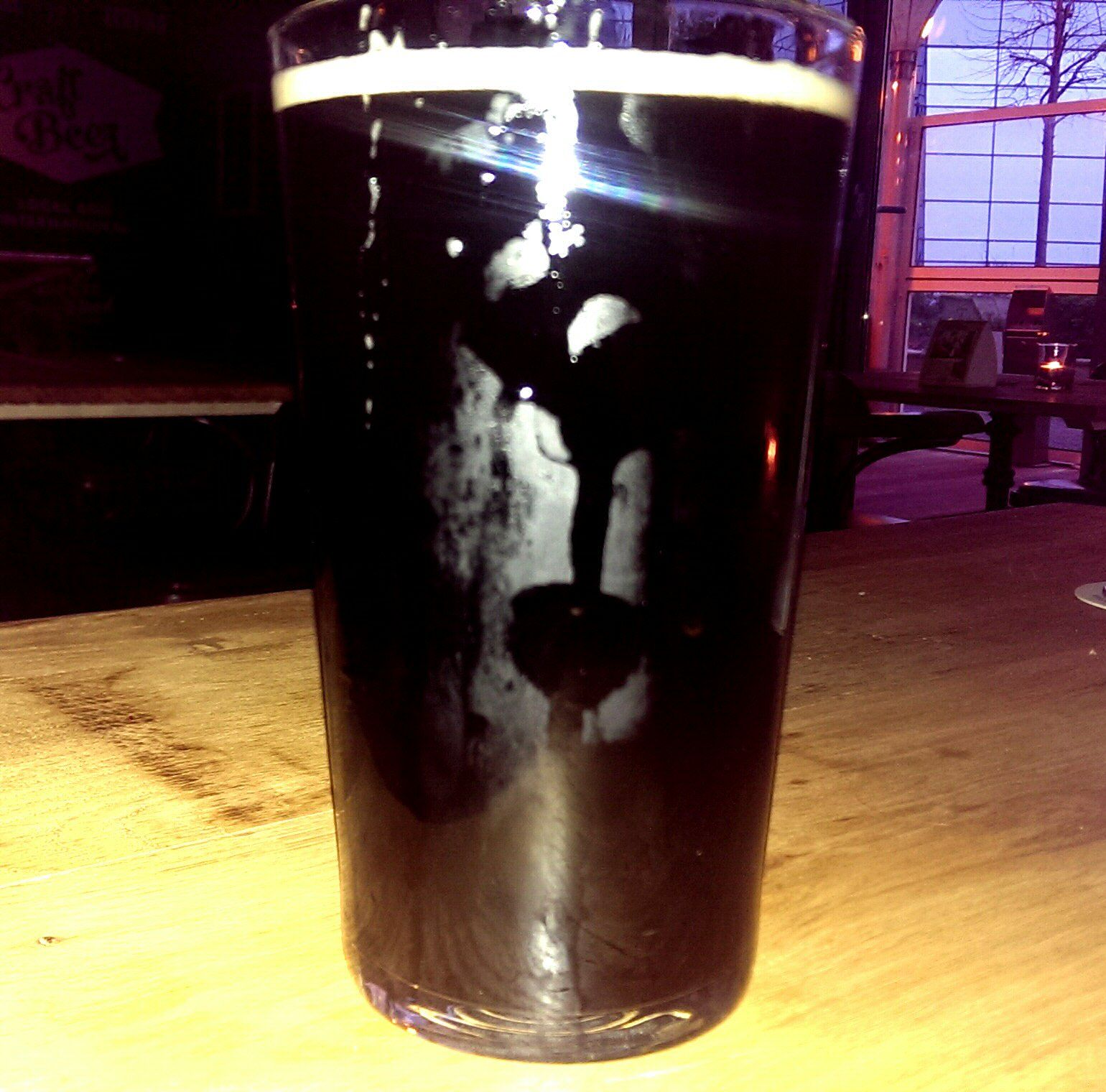