Last week I walked downtown on the way to meet my boyfriend and I passed a tonne of restaurants overflowing with couples holding big bunches of flowers.

This was my first Valentine's Day with a date, so I didn't really know what to expect. All I knew was that the idea of this 'set menu' bandwagon that restaurants have jumped on seemed like my idea of hell. A good date for me is in a quiet, intimate venue without the tacky tinsel and love hearts hanging from the wall.

Working in Lovin Dublin, it's a given that food is my thing. I always pick the venue for our dates and usually know what I'm going to order before I even get there.

Last week was different however, I let my boyfriend pick the venue. I was praying to God that he would know I didn't want my cutlery to be sticking to some dingy confetti that had been purchased in a Euro Store and spread generously all over the table.

Thankfully that was not the case, in fact, he completely smashed it.

Even with Google Maps on hand, finding Variety Jones was a bit of a struggle; I walked past it twice before actually realising where it was. It’s a pretty unassuming building, the only way I knew I had found the right place was by the funky abstract logo printed on the front door.

The most amazing dinner at @variety_jones last night 🍷. . Such a cool spot with some of the best food I've had in a long time. . I'm not the easiest person to bring for food 🍴I make you wait until I've snapped a picture of your dish, I dissect every ingredient on the plate and always lean over for a taste of yours - for research of course! I'm.v lucky that @john.sharpson has the patience of the gods and let's me do my thing 🙏🏼. . PS. Yes, my shirt is from the men's section in @primark.ire 🙈. . #Dublinfoodie #dublinblogger #lovindublin #igersdaily #dublin

We were greeted by the coolest-looking lady who seemed more like a friend than a host and she led us to our very cosy table. Inside there’s only a handful of seats. Even though the restaurant was fully booked, it was still super chill and I (with my bad ears) could actually sit back in my chair while my “hot date” and I conversed.

The menu is what stood out for me most. It was unusual and intriguing serving up a tapas-like selection of starters and tasters. These are broken up into snacks, cold warm and pasta dishes.

To start, we were heavily influenced by the couple sitting across from us who had ordered the most amazing looking plate. We soon found out it was foie gras with potato waffles. It was one of the most unusual starters I’ve had in quite some time but it was truly delicious.

They have an extensive wine list with wines I had never even heard of. As it was Valentine’s Day I opted for a red called “Love and Grapes” and it was the perfect pairing to wash down the decadent starter. 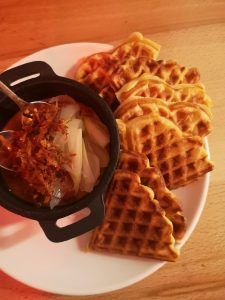 You could order a couple of small dishes in Variety Jones and you’d be sorted but my eyes were drawn to the main courses on offer. It’s a great place for a date, especially one like me because I’m a divil for picking at my boyfriend’s food because the main course is served and priced as a large portion intended for two.

We could choose between lamb or trout, each with their own sides – we opted for the latter.

The dish came out and I could feel myself getting giddy. The trout was covered in zesty lemon sauce and mushrooms which sounds like an odd pairing but it really did create a wonderful harmony of flavours. On the side, we had the biggest gnocchi I’ve ever seen, plump and chewy, also covered in mushrooms which I was delighted about. 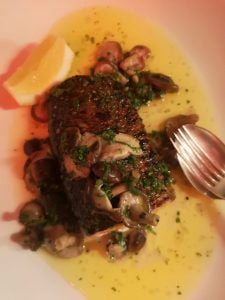 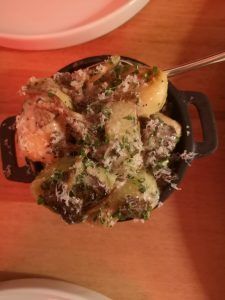 We finished off this top class meal with a toasty homemade apple pie, well more like and apple cake. It was spiced, bursting with a cinnamon flavour and soaked up the sweet and creamy custard that surrounded it. It was like something your granny would make but much fancier presentation wise. The Christmassy kick in flavour had me almost licking the plate. 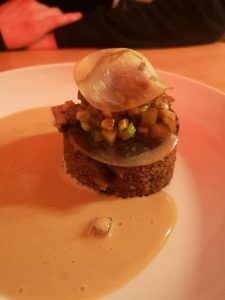 All in all, this really was a superb meal, better than I could have ever expected. The venue is pretty simple but the food gives it great character and something worth talking about.

As someone who dines out more times a week than she’d like to publicly admit, this place brought something new and unique that really made it stand out from the rest. Since my visit I’ve been recommending it non- stop.

Get in there now before it’s booked out for weeks to come – I have no doubt it will be.

Urban Health have announced that they're now pet-friendly