The man behind Fallon & Byrne's pizza has been honoured at an internationally recognised awards ceremony.

Fallon & Byrne's head pizza chef Alessandro Capozzi has been crowned the best pizzaiolo in Ireland and placed second in the world at the Campionato Nazionale DOC in Italy.

The prestigious competition, which is recognised by UNESCO in support of Neopolitan-style pizza, saw over 500 chefs from all over the world vie for the coveted award.

Speaking about the honour, Fallon & Byrne's MD Fiona McHugh said: "We're absolutely thrilled that Alessandro has received the recognition he deserves and are incredibly proud that he’s bringing home to Fallon & Byrne, not one but two internationally coveted prizes. I’m not surprised though - as one of his best customers, I’ve developed a worrying addiction to his Spicy Devil!" 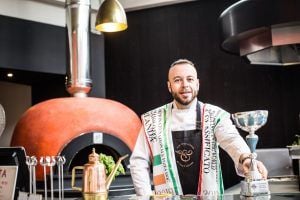 Alessandro, from Avellino in the Campania region of Italy, said that he was "extremely proud to compete at the highest level andspread the word about real pizza napoletana in Ireland and the rest of the world. Great pizza starts with great ingredients and we're lucky to have access to super produce from the food hall."

Alessandro's hometown is planning a celebratory party to congratulate the chef on his award.