An Ethiopian supper club is popping up in the city next month and it’s definitely one to check out.

Gursha is an exciting new concept (the first of its kind in Ireland, to be exact) by Mel Roddy, one of three siblings from Ethiopia who grew up in Dublin and wanted to bring the Ethiopian way of dining to the city for the first time.

The supper club will be operating out of the fantastic Cloud Café in North Strand on Friday and Saturday evenings from early August, serving up delicious, authentic Ethiopian dishes.

Mel tells us, “Myself and my two sisters are from Ethiopia and adopted our Irish parents back in 1995 and brought them to live in Ireland. Our family has always loved Ethiopian food and never really got to eat it much as there were never any Ethiopian restaurants in Ireland. We've had it in different cities around Europe such as Manchester, Lisbon, Amsterdam and many more. 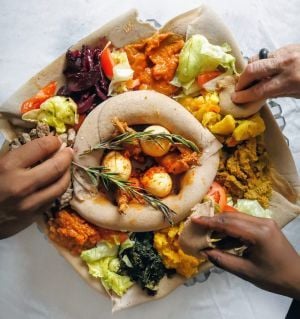 He adds, “We went on a long overdue trip to Ethiopia last October as we hadn't gone back since being there in 2009 and before that in 2001. It was then I confirmed in my head that I wanted to introduce the Ethiopian way of dining to Dublin.

“I went from wanting to open a restaurant with no experience to nearly setting up a food stall and to now actually being on course to starting our first supper club on August 9.”

After meeting with Nick, who runs the Lil Portie Caribbean pop-up in Rathmines, and checking out the place along with his family, Mel decided that a supper club was the way to go. 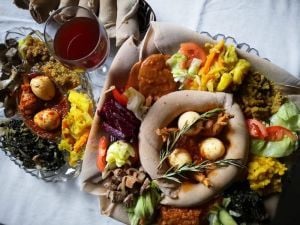 The name Gursha can mean 'mouthful', or it can also describe when you feed someone else on the table by giving a gursha, and is a sign of friendship and love.

All their dishes are cooked by two chefs; family friends Mamay, who previously worked as a chef in the Ethiopian Embassy here in Dublin, and Werke, who used to babysit for the family.

Mel says, “Our menu is kept minimal with seven dishes for the supper club - three meat and four vegan. Ethiopian food is supposed to be eaten on a communal plate with maybe four or five people sharing off one plate; it kind of brings a sense of togetherness and way of bonding. You can also choose to have your own plate also, which a lot of people do.

“The food is served on a large sourdough pancake-type bread called Injera. Injera is gluten-free and is made from the world’s smallest grain called teff, which has five times more fibre than wheat and is also a source of protein. The injera is used as a plate and also as utensils as you use it to pick up the various stews with your hands by tearing off pieces of injera.”

The first supper club will be kicking off on Friday, August 9, with each sitting holding around 30 people maximum.

After that, Gursha will run every Friday and Saturday from 7pm; tickets are €25 each which includes all dishes and you can book them via Gursha's Facebook page.