I honestly don't know who we thought we were, rocking up to restaurants on a Friday night hoping they'd have some space at the Inn for us.

Myself and herself very rarely plan to go for dinner unless it's a special occasion.

Which means 90% of the time, we're walk-ins that restaurants love to see on most nights of the week.

Except, on a Friday of course.

One Friday a couple of weeks ago, we had admitted defeat to ordering a takeaway and watching some Netflix.

We had danced the usual "what are you feeling" dance until one of us finally plucked up the courage to suggest an Indian - dinner was, for once, sorted in record time.

The time we normally spend arsing about deciding what to eat was now taken over by another argument:

Indian doesn't taste as good in a takeaway as it does out.

Jeans on, hop in the car and there was only one place on our minds. 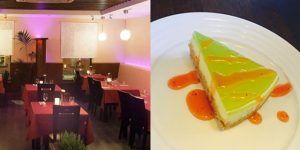 I had heard so much about 'Konkan' on Clanbrassil Street from my sister that I was almost obliged to try it.

There was only one empty table in the restaurant and I knew it was too good to be true.

The next hour was spent driving around a 5km radius of Konkan trying to find an Indian close enough to the house.

Our long spin eventually ended up in Terenure.

We had already been refused by about 8 Indian restaurants at this stage.

(Is Friday national Indian day or something?)

There was four Indian restaurants in Terenure and the general consensus was that if there was no tables at any of these, we were getting forks and knives out to start cutting up and cooking each other.

But, before I started googling cannibalism, we spotted another restaurant beside Sawadee (the last restaurant we got rejected from in Terenure).

It was Asian but f*ck it, at this stage it was as good as we were going to get. Located beside Base and Aldi in Terenure, Q's Creative Asian Dining didn't appeal to me at all.

It was the winner by default. It was our last pick. It wasn't even a pick because we didn't know about it, we just came across it.

I came in the door first and was ready to turn right around because I thought it was just a takeaway.

We were reassured that there was tables upstairs and once again, I was close to exiting when I saw that the place was completely empty.

We had a brief discussion and the hunger outweighed everything else, so we stayed.

Prawn Crackers arrived at our table before we did which was a nice sight for two hungry-hippos.

It was everyone for themselves but I did let her have the last one...because I'm a gentleman...and before she snatched it before I got the chance to.

I ordered the Salt & Chilli Crispy Chicken for starters and the Black Bean Stir Fry dish with beef for mains. 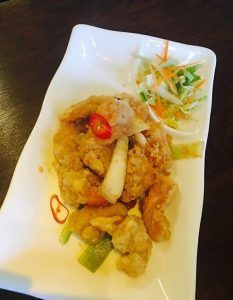 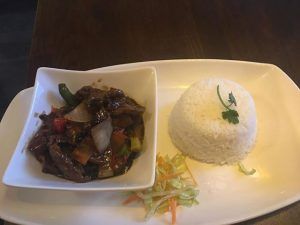 We didn't know it at the time, but their Crispy Chicken is one of the most ordered dishes on Deliveroo.

This chicken left me sweating but satisfied. My mouth was on fire and it didn't get any rest with the Stir Fry either.

I got rice, she got chips and we did the old half and half.

We got all the veggies with our dishes and they didn't spare the beef with mine either.

Service was great, we kept getting asked if we were happy with our food and our happiness was reflected in the waitresses delight also.

Mid-way through our starters, the restaurant started filling up. Another couple who we overheard contemplating the same thoughts that we had earlier were met with the same Prawn Crackers and even though they didn't know it at the time, we knew they had made a great decision.

By the time we had left, the place was full.

Once our mains were taken away, we were grabbing the coats ready to go when we were stopped abruptly.

"Lemon or lime cheesecake," we were asked.

Puzzled, we said that we were okay for dessert but the waitress persisted.

"You must have the cheesecake, it's on the house."

So once again, we were asked to pick and we chose lemon.

This cheesecake was shared between the two of us.

It was so delicious but the fact it was free made it delectable. 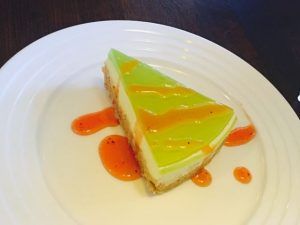 I'm a big lover of cheesecake so I was very thankful when the empty plate was taken from our table.

I was surprised when I got the bill too. A three course meal with cokes (I went for the second one mid-way through the stir fry) all for just a little over €30.

We didn't get our Indian but we got a little gem instead.