You've probably already heard of Soundwave, the music app set to explode and completely revolutionise the music industry as we currently know it. Would you believe the most exciting thing to happen to music internationally is being run by three Irish men based out of Rathmines? Soundwave is founded and run by Brendan O'Driscoll (CEO), Aidan Sliney (CTO) and Craig Watson (COO). We got the chance to sit down with Brendan to get all the exciting news on Soundwave before they jetted off to attend Google I/O next week.

So Brendan, we're really excited about how Soundwave is going to change the future of the international music industry, but can you explain what it is to someone who's never used it before?

Soundwave is an app for Android and iPhone. When you download it you can see all the music your friends are listening to on spotify, youtube or any other music player. So if you want to find some new music but you're not sure what's new and cool at the moment you can download soundwave and follow your friends and see what they're listening to. There's also a load of musicians, celebrities and athletes using Soundwave so if you want to know what Jamie Heaslip is listening to right before the final of the Six Nations you can open up Soundwave and check out his Soundwave profile. 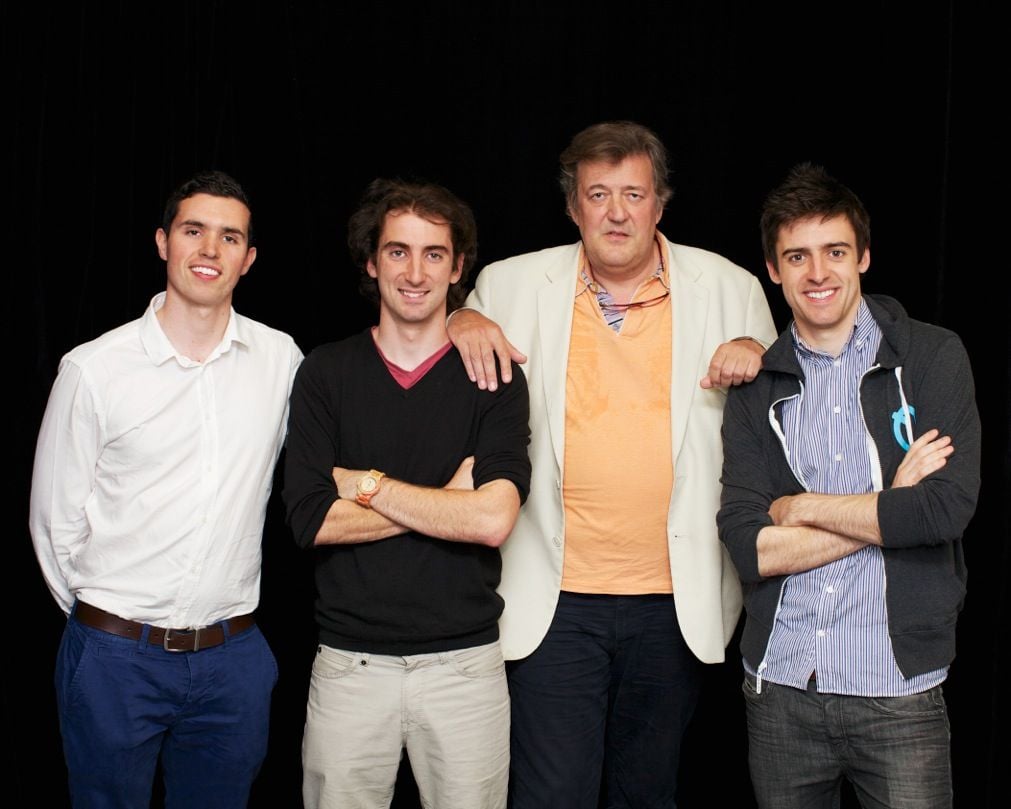 That's so cool. And so what if I have really bad taste in music and it's shocking and everyone can see?

It's definitely a sharing is caring community so people very quickly get over their fear of sharing their guilty pleasures and their Justin Bieber infatuations. It was something we were worried about at the start, so we have made provisions that you can hide some of your songs but we've found that people get very comfortable with their music tastes being shared.

I hope no-one see's my guilty pleasure songs! How did you come up with the idea for Soundwave?

I was living in Sweden and Aidan was in Ireland, we used to skype a lot and share what music and movies we were listening to. We'd often tell each other of new artists we had found. At the time (in 2012) most people were at this point listening to all their music on their smart phones and we thought it was strange that smartphones were the most connected devices in the world but for some reason my phone couldn't share with Aidan's phone what I was listening to.

Rumour has it you saw a really hot Swedish girl walk into a pole because she was so distracted by the music she was listening to - that's where the initial inspiration for Soundwave came from?

Well that was the very initial seeds of the idea, it's almost like an urban myth at this stage! It made me think that not only do I want to know what my friends are listening to, but I also want to know what other people are listening to today on the street I was on, the city I'm in or even other parts of the world. I could check out what's cool in rap music today in Brooklyn by literally drawing a circle around Brooklyn with my finger using a map feature within the app. It will show you not only the last song played there but the most frequently played songs there. 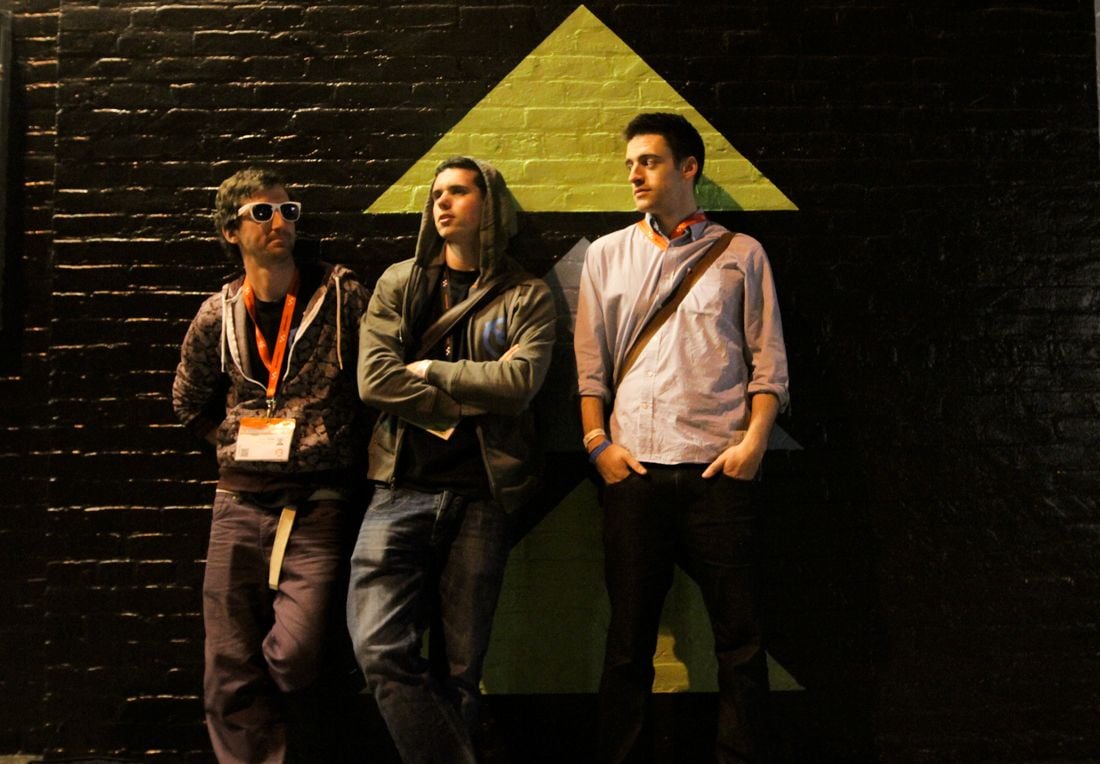 What's the response been to Soundwave?

It's been incredible, we've had the app out for under a year but we have over a million users in over 190 countries all around the world, it's amazing seeing all that data pour in and in real time. We get to see what music is taking off, where it is taking off and who was the original person who started listening to it before it took off.

How is the music industry responding to it?

Very well. The music industry currently has no information about what's going on out there as no one really buys music anymore, over 95% of music that is downloaded is downloaded illegally so they have no visibility whatsoever about the music being listened to, and where it's being played or how frequently it's listened to. Having that information makes a world of a difference to the music industry to help them figure out what to do next, so they've been knocking down our doors.

What's the biggest challenge since starting up Soundwave?

Sleeping! No honestly we have a very strong can-do attitude in Soundwave and the challenge is keeping that attitude as the space we're in is up against the Instagrams, Facebooks and Snapschats of the world but in our space which is music. There's not many people doing those big consumer plays coming out of Ireland so for us it's focussing on the end goal. 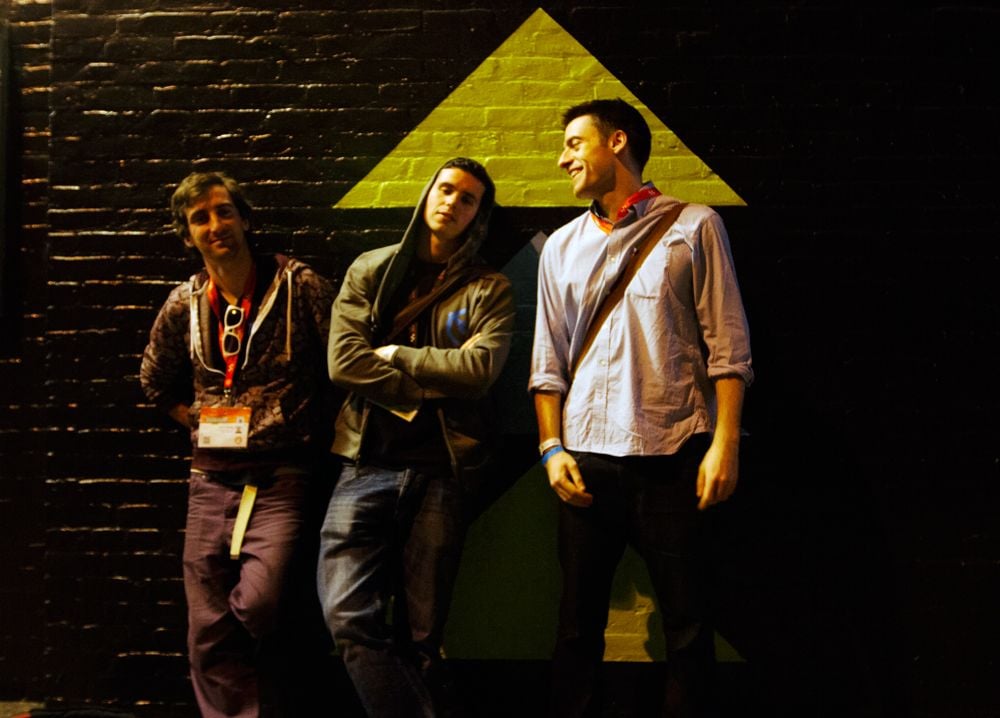 And what is the end goal?

To be the biggest and the best. I think we can for sure be the Instagram for music. Definitely. I want hundreds of millions of users all around the world. And I want Soundwave to be on the front screen of everyones phones.

Any exciting plans for Soundwave that we need to keep posted on?

We've got a big announcement in a few weeks. It will be the most major feature that we've added to the app to date. I can't talk too much about it just yet, but it's pushing the social functionality of Soundwave to the next level. As a teaser I'll tell you that you can create playlists with your friends in real time, and you can chat as well.

How do you find the start-up community in Dublin?

Love it. Absolutely buzzing community. There's start-ups all around the city going hell for leather, and there's a really strong peer network that wasn't here before. It's a small community and everyone knows one another very well so that's a very powerful thing.

So what's your favourite thing about living in Dublin?

There's an insane amount of pubs, clubs, restaurants, cafes. I mean we're here in Rathmines. In between Rathmines, Portobello, Ranelagh and Rathgar there's so much going on. You can walk everywhere, it's all very contained. 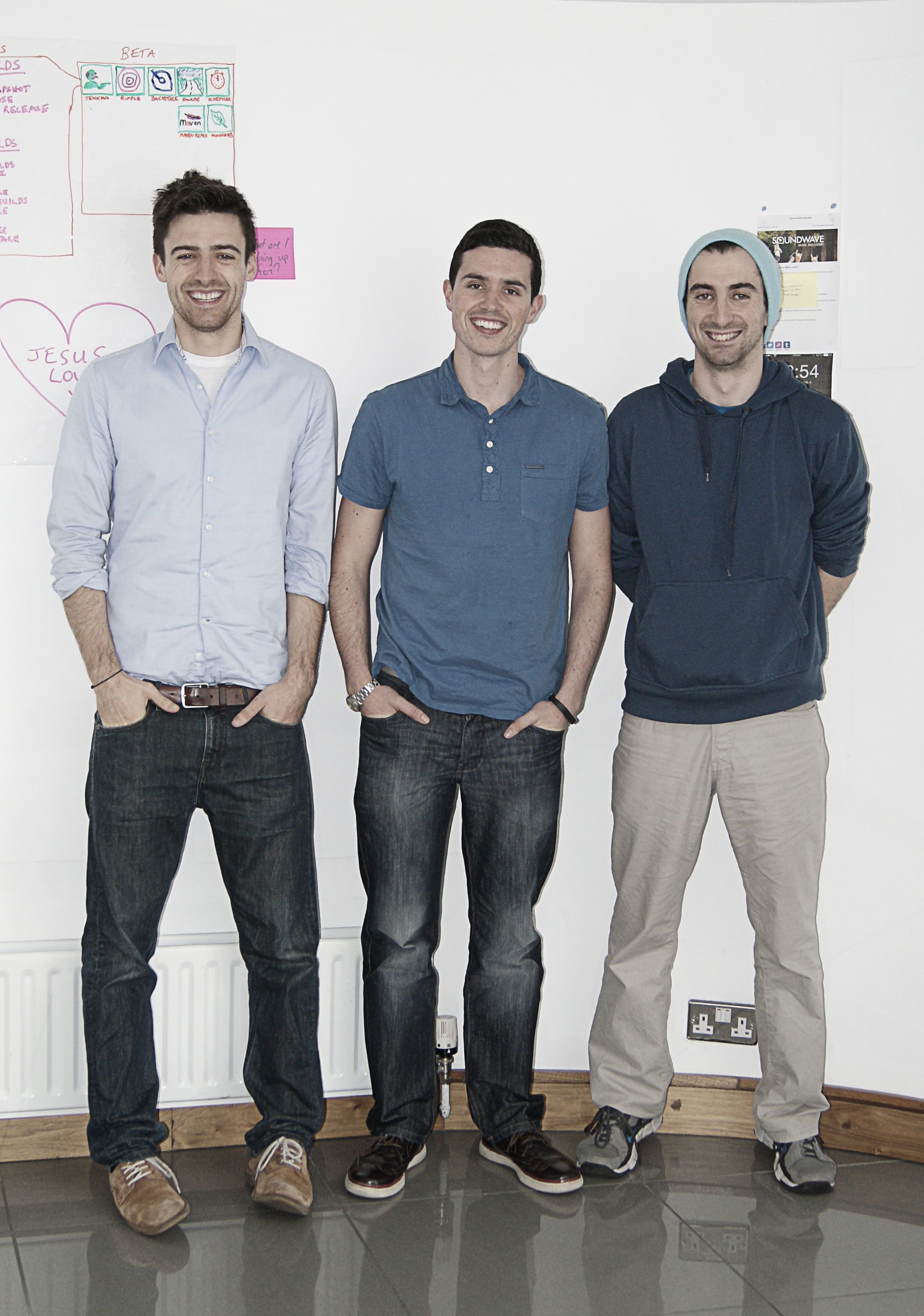 I went to Las Tapas De Lola on Camden Street recently, and that's very good. Yamamori is a good spot if there's a group of you, I go there a lot.

Okay and favourite bar or pub?

We've got two. Slatterys near Grand Canal because it's close to our old office and we've got Mother Reilly's in Rathmines. We're big fans of the old man pubs to sit down and have a pint of Guinness in after work. It's nice for a quite ones.

So the future of the international music industry is happening in Mother Reillys?! 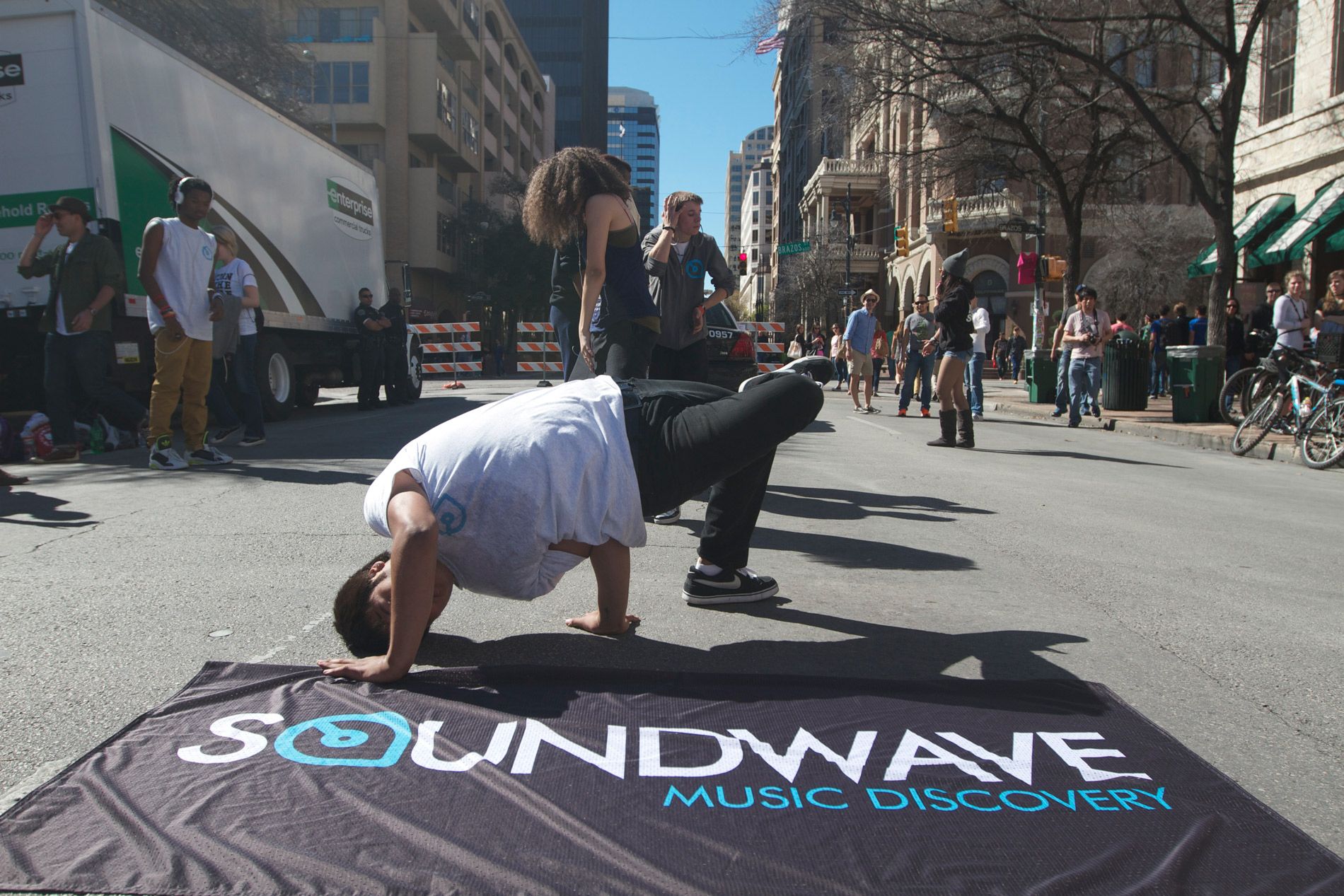 If you had a day off in Dublin, what would you do?

I'm a recent convert to Pheonix Park. I'd go out there cycling or jogging or just to hang out. It's one of the biggest parks in Europe and it's really under utilised. Going out to the Wicklow mountains is also great, there's great mountain biking out there and mountain climbing. When I do have a day off, which is rare, I always try and get out for some fresh air. That's another great thing about Dublin, it's a big city but just 20 minutes outside of the city you're in pretty amazing country side.

Best advice you ever got?

Listen to everyone but make your own decision.

On your Soundwave app, what's your most played song?

What was one of your best discoveries?

We got on to Hozier really early. Last year we finished our Youtube integration and we could see that some of the live Hozier videos were massive last summer. Okay, and lastly - what's the guilty pleasure song on your Soundwave profile!

I get a lot of abuse in the office, I probably have the worst taste out of everybody. At the moment it's probably the #Selfie song.

Thanks for taking the time to talk to Lovin Dublin, Brendan. Now everyone, go and download the app if you haven't already and see if it's possible not to get as addicted as we are!