As part of a new series on Lovin Dublin, we're catching up with a various selection of prominent, sound city folk to talk all things Dublin, food (obviously) and a bit about themselves too. We thought better than to rendezvous in some stuffy hotel room but rather, given the theme of the website thus far, in as many tasty Dublin haunts as we can manage; expanding waistlines is the name of the game.

First on the menu, I had the genuine pleasure of sharing one of Neon's Thai sweet and sour dishes with prolific stage actor, Love/Hate's newest recruit and massive foodie, Aaron Heffernan (who not only ate his own Thai green curry but also most of my meal along with two enormous 99-style ice cream cones too. He's a growing lad, mind.) 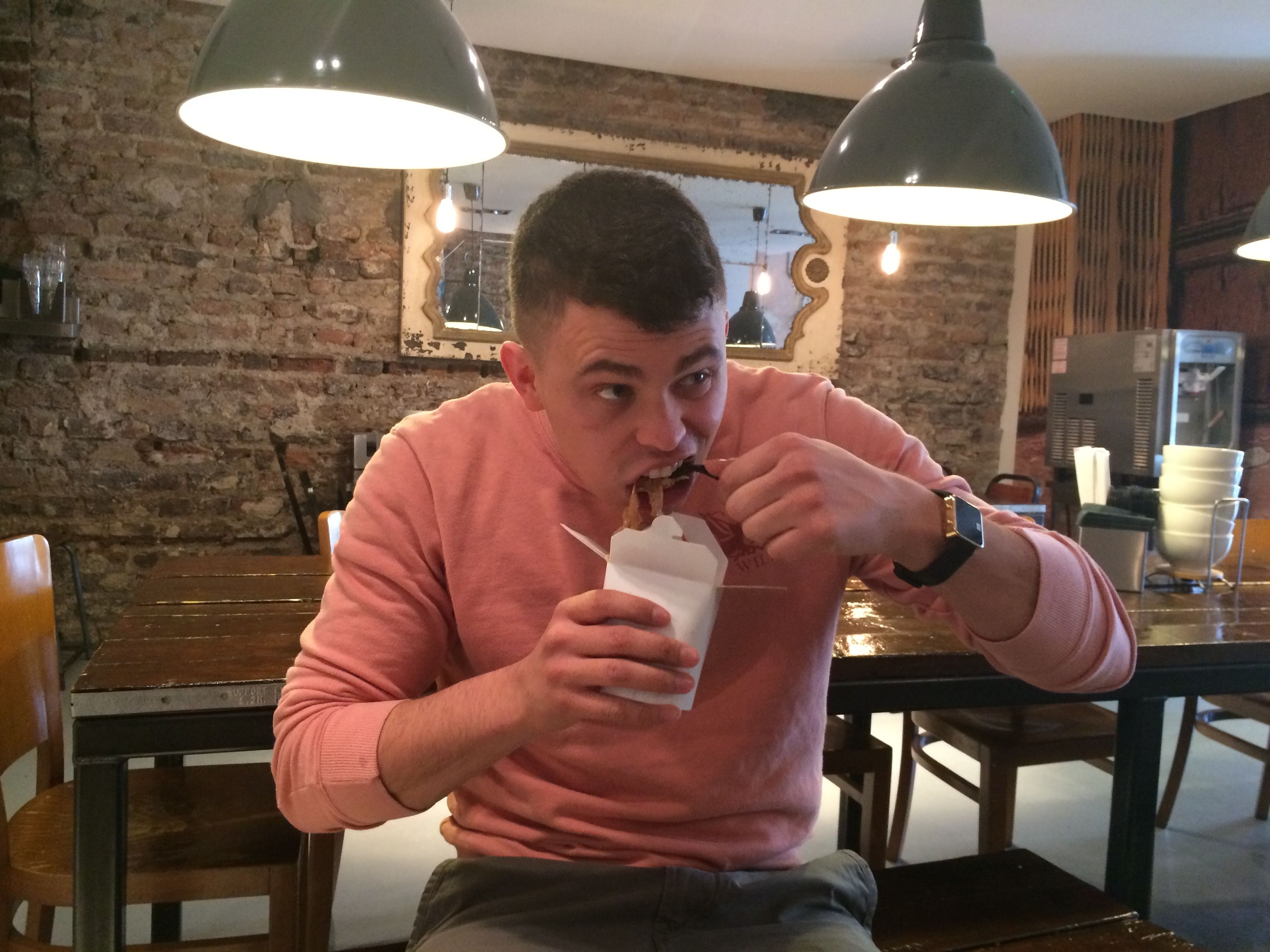 Most Dubliners these days will recognise Aaron from his work as the token hottie in the absence of Dazzler, cheeky Detective Inspector Gavin (season 3, Love/Hate), but he's been grafting his way to the top for some time. This Trinity graduate has many impressive guises; he's the best Obama impersonator probably ever, he's an award winning puppeteer, he's a dab hand with a whole range of accents and he's f*cking awesome on stage. He's also the co-founder of one of Dublin's most promising theatre companies, (alongside his Game of Thrones best pal, Jack Gleeson) Collapsing Horse Theatre. What's more, it's pretty unlikely that I'll laugh as much in any of my future Lovin Dublin lunch dates as I did with Aaron 'I just love really really bloody steak' Heffernan, apologising endearingly for rubbing the sleeve of his jumper in such a way under the table that may have appeared to me as though he was rubbing... something else. Should all of the above go down the swanny, Aaron could always make for a pretty entertaining stand up (oh but wait, he's already done the sketch thing too.) 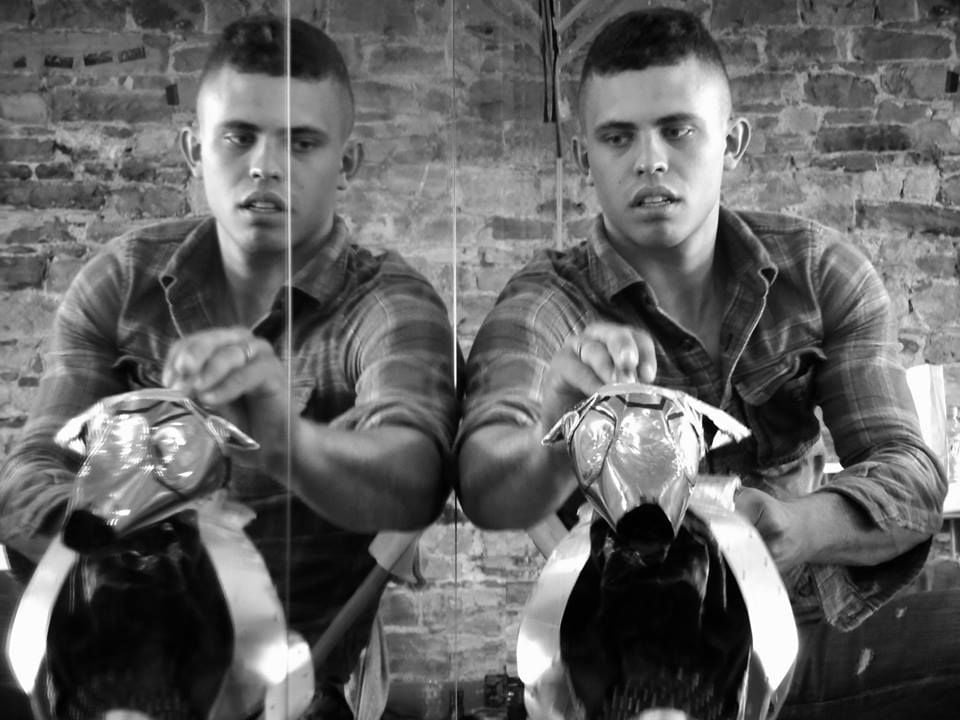 Though he's well on his way to joining the big leagues, having already made a cameo appearance in The Alan Partridge Movie ('yeah, all three seconds of it', he says self-deprecatingly) as well as starring opposite Lily Collins and Jaime Winstone in Love/Rosie (out this year), Heffernan possesses that rare and admirable trait, most often attributed to us Dubliners: humility. Despite sharing the floor with the very talented Brian F O'Byrne and Tom Vaughn Lawlor on his most recent gig, Heffernan admits to politely grabbing the latter to one side in the hopes that he'd be agreeable to the all important selfie for his brother. 'He's so nice about that stuff, I've seen him doing it lots with kids from Trinity, he actually did the same course as me.' On a family background tangent, Heffernan informs me that his dad was a pretty cool and massively popular DJ back in the '60s. 'Yeah sometimes people come up to us when we're out for dinner and I'm like 'yeah, sure you can have a photo with me, and my autograph, yes I AM that guy from Love/Hate' (he jokes) but then they're like to my dad 'oh my God, are you Dave Heffernan?' I'm like Dad, you're stealing my thunder here.'

On the subject of career trajectory, Aaron explains that he's open to just about anything; theatre, film, TV, he'll give everything a go. Would he get his kit off for a role? 'Absolutely, full frontal' he teases. 'I actually have a reputation on set for not keeping my clothes on, as it happens.' 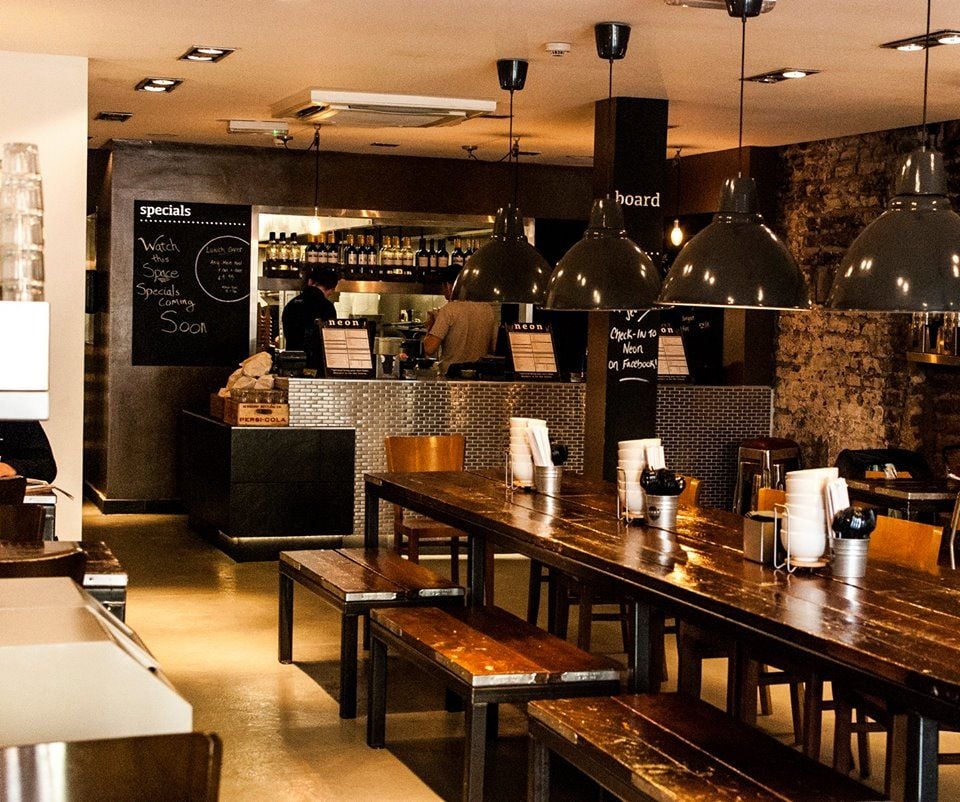 As for his most famous character to date, will he be returning for season 5? 'Yes, but I have absolutely no idea what's going on, we start shooting the day after Paddy's Day'. What would you like to see happen for D.I. Gavin? 'Ideally he'd go off around the world like some sort of Liam Neeson, rescuing his daughter from various situations'. Um, and all this within the realm of Love/Hate? 'Yeah'. OK, so. And what of Nidge's fate, should Vaughn Lawlor's character meet his maker? 'No, I wouldn't want to see him die, but a very long prison sentence'. Of course we discuss the characters as though they are real, such has been the cultural influence of Stuart Carolan's creation. Joining rank with one of Dublin's best loved shows, it's not surprising that his experience in the capital has changed: 'It's bizarre how many people still have images from the show in their minds. I thought after a few months they'd forget the smaller characters. But people still come up to me regularly now and it's always positive, touch wood. Everyone has nice things to say about it. I was expecting a lot more hassle, just because the bad guys are the heroes and I'm doing the whole guard thing.' They probably just say it behind your back, I joke. 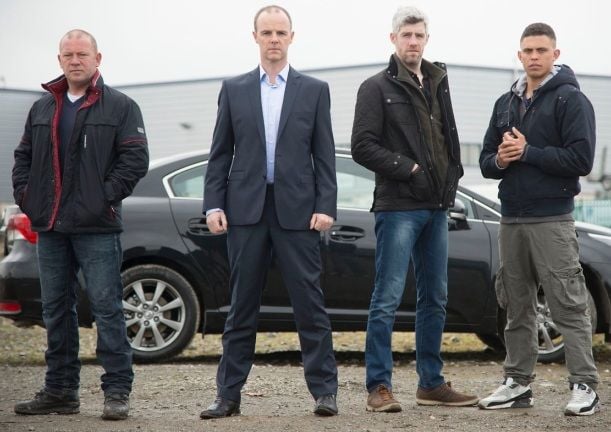 On the Lovin Dublin front, it would seem things are definitely improving in the pale, but how are the opportunities looking for a young Irish actor in 2014? Is it still a pile of pants in that you HAVE to go further afield like a la Colin Farrell in order to have some success? 'No I wouldn't say that. You can 100% have a good go at it here for starters. There are more and more good opportunities here for young actors as more big series are being produced and more international projects are being shot here as global entertainment makes a move back towards fantasy stories and epic geographical vistas. Such as it is, series like Game of Thrones and features like Dracula Year Zero are being shot up north at the mo. And even though Bertie's daughter, Cecilia Ahern (who wrote Love/Rosie) had set her story in London, she wanted it filmed here to give the industry a boost which is cool. Let's keep it bloody green and see what happens.'

Clearly, Dublin's still got a lot to offer this young thespian. Asked to describe his hometowm in three words, I thought I'd time travelled back to 2009 when he said 'Always great craic'. He quickly remedied that minor malfunction when he continued, 'can't believe I attempted to give that as a veritable answer. NO. I'm gonna go with 'resilient, catching, brick'. Or just 'James Joyce, OK?'. Erm, okay.

'Really what I love about Dublin is the familiarity, having been away with work here and there. It's always stimulating, coming home to a familiar atmosphere and humbling surroundings. And I love the disparity between old-world Dublin with its traditional shop-faces and Georgian architecture and the new developing Dublin of street art and prospering little New-York style villages like Camden street and Ranelagh.'

He's already inspiring others on the back of his acting credits thus far but which Dubliners have inspired Mr Heffernan himself? 'Georgia Salpa, BOD and my brother Jesse.' Can't argue with that. But what about Stuart Carolan, creator of Love/Hate, I ask. 'No, he'll probably kill me off at some point.' 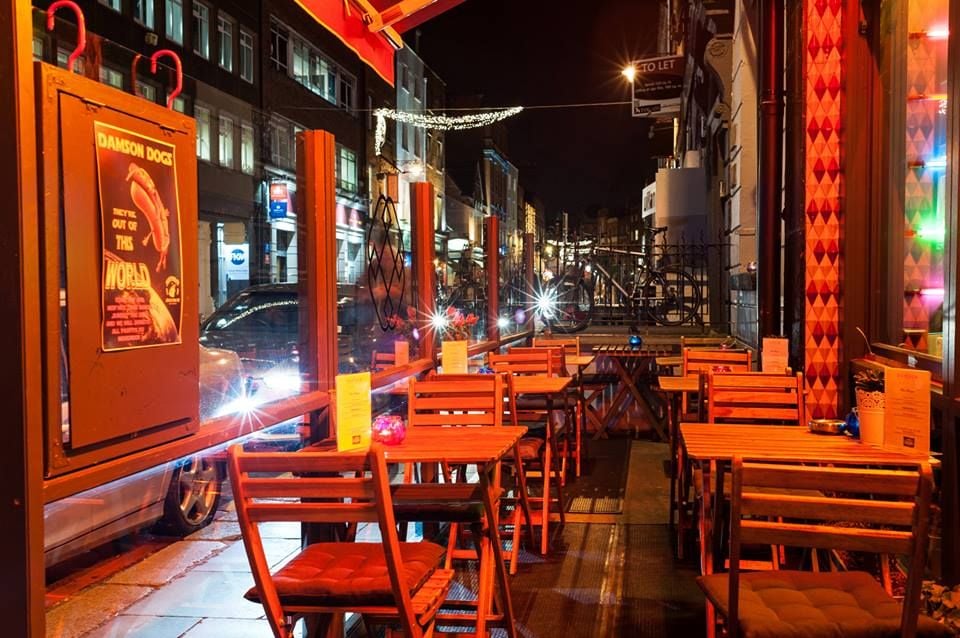 So when Heffernan's not charming the pants off us on stage or on the telly, how does he enjoy his city?

'Restaurant wise, The Good World Chinese on George's Street is my family favourite. We go almost every two weeks, a dynastic family tradition through the generations.' You don't see loyalty like that to a restaurant these days. And when he's not chowing down on chinese? 'Asador, where my brother Carl runs the ship.'

'My perfect day would go like this: eating Sunday morning breakfast/leftover Charlie's with the lads after a bloody great night out dancing like single girls again; going home to my mother and the dogs before vibing on into Fallon and Byrne to see J & The Heffafunks EVERY SUNDAY EVENING AT 5:00 IN THE WINE CELLAR (shameless plug, ahem) then head back towards Stephen's Green to hunt swans for the Sunday roast.' The perfect spot for a night on the lash? Heffernan is a regular at The George Bernard Shaw 'cause it's beside his gaff, No Name Bar 'cause it's also very cool but it's Damson Diner that he touts as his absolute favourite. He's yet to try their whiskey sours, though, so I'm not sure he can call himself a devout fan 'til then. 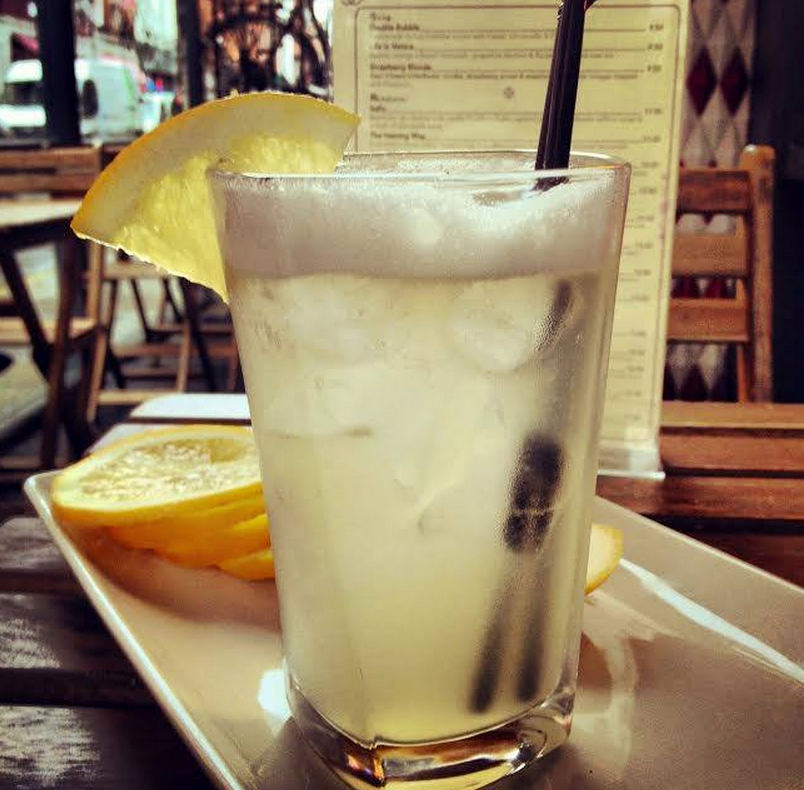 'What I'd like to see more of in Dublin? Emily Ratajowski and hoverboards', he says, kidding, not kidding. 'Although there's loads of cool shit happening and cool initiatives flourishing elsewhere, there's not much we can take from likening ourselves with other cities too much. I think it's happening naturally. Let's not forget what Hadrian said to the Romans after a devastating fire', he says, going all philosophical on me, '"Brick by brick, my good citizens. Brick by brick." Also, more purpose-built lakes for rowing.'

Back on the food front, Heffernan expresses extreme jealousy when I tell him I'm off to Ranelagh's Village Butcher to learn about steak after our tête-à-tête at Neon. 'No please will you actually send me photos? The bloodier the better' he says as I wonder how fitting it would be for him to be cast next as a vampire. While he's perhaps the most enthusiastic meat eater I've yet to meet, and eater of foods in general, there's one thing to avoid when eating out with Heffernan, ladies be warned: 'Ketchup'. What, like Chef Vs Heinz? 'All of it, just don't talk to me about ketchup'. Noted. But what, then, if he wound up on Death Row alongside Nidge (if such a penalty was exercised in Dublin and therefore in the fictional world of Love/Hate) would this young charmer eat for his last ever meal?

'A Zaytoon chicken Shish meal filled with strips of Bear steak with 3-in-1 garnish and special sauce made from melted spaghetti and chorizo bolognese'. Nice. 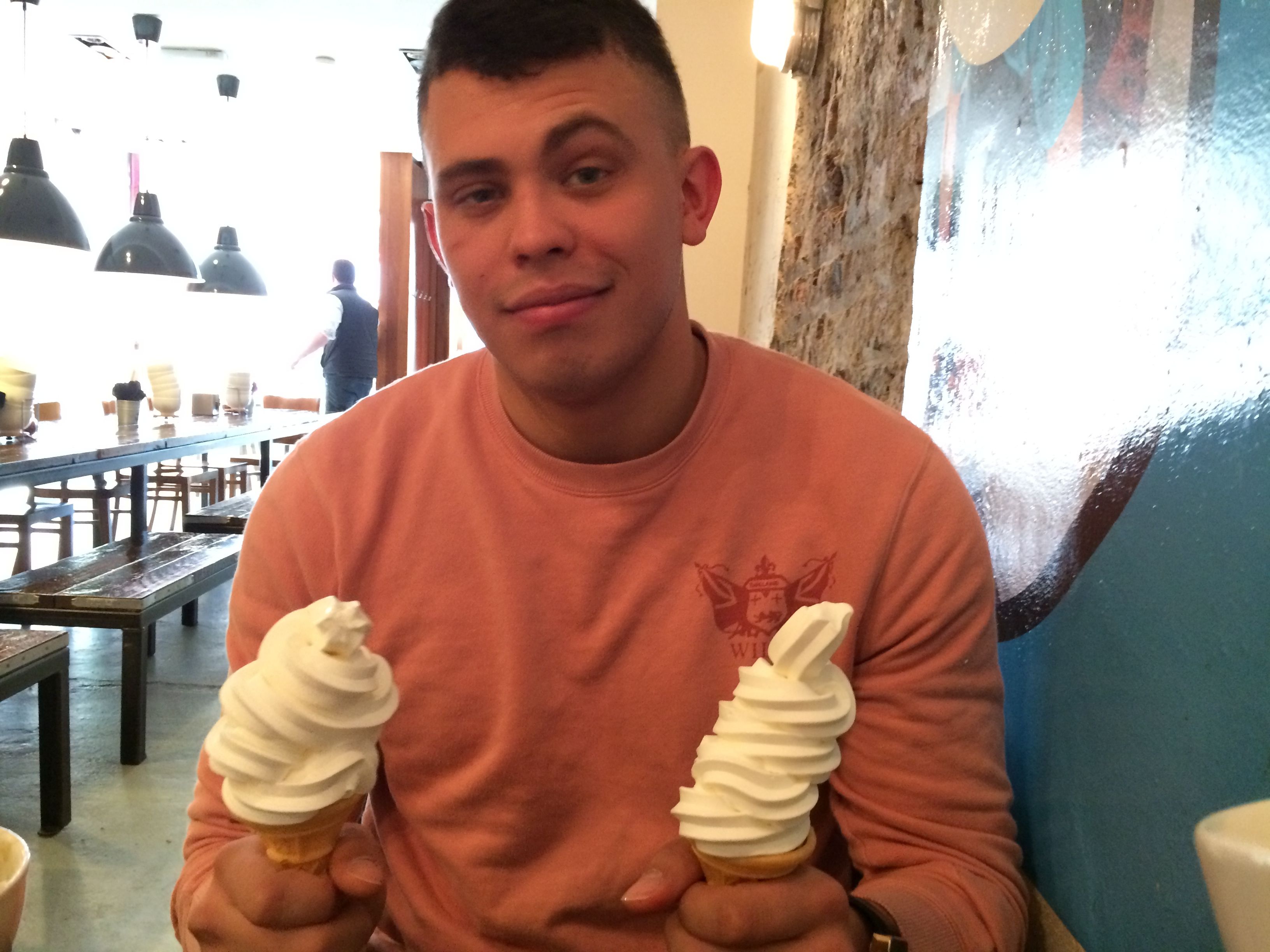 Soon after, when Aaron eventually recovers from an extreme bout of brain freeze brought on by more ice cream than it would take to feed Angelina Jolie's kids, it's off to our next appointments. 'So will you be doing these lunch dates with lots of people then?' That's the plan, I say. 'Okay so how about I turn up as some crazy French person with a poodle and just like ruin it, and film it, that'd be gas, wouldn't it?' 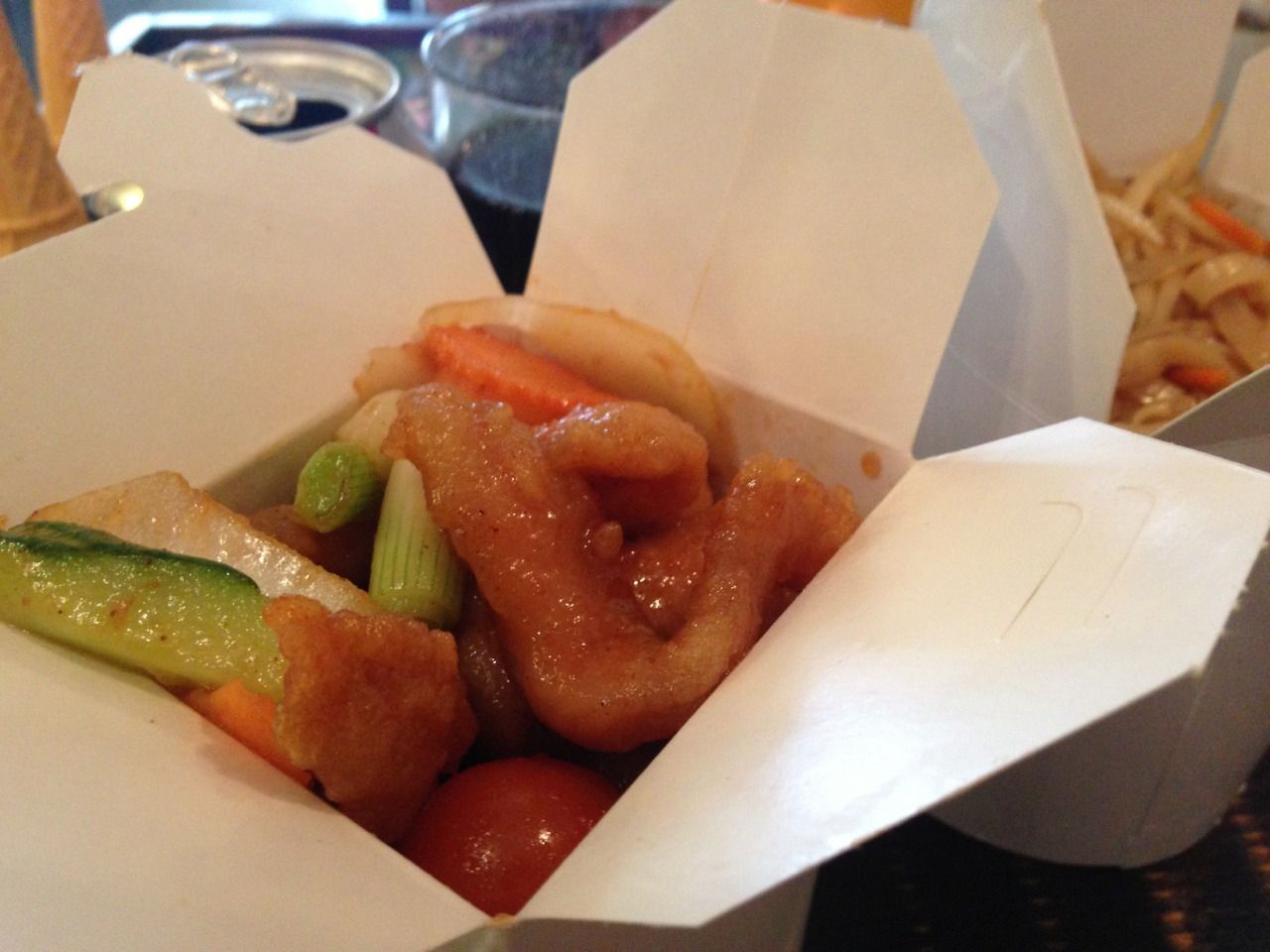