We are really missing dining out. Like, so much. But so many Dublin restaurants are now delivering some seriously stunning BBQ kits that allow you to recreate their magic in your own back garden.

Here are ten BBQ kits you can order to have the most delicious evening in your own back garden.

I got this one last weekend and lads, it was so damn tasty. Their BBQ Meal Kit only costs €49 and has everything you need:

They also have other stunning boxes such as their Seafood Feast, home cocktail kit and dessert box.

This Ranelagh spot is offering both Striploin boxes (€58) and Ribs boxes (€45) and they both look mouth-watering.

Find out more about what else is available and where they deliver to here.

Check out the range of #TBGatHOME options to keep you satisfied during your lockdown. Phone 01-498-1805 to pre-order for collection between 5:00-9:30pm. #Ranelagh #DublinRestaurants

Missing your wings? Because same.

Wing It has come out with their Wing It At Home kits, including their Traditional Wing Box, Boneless Wing Box and Mixed Wing Box. Find out more details and the locations they're delivering to here.

Plus, you can also order Offbeat Donuts from their website for afters! Check stuffyouneed.ie for more details. 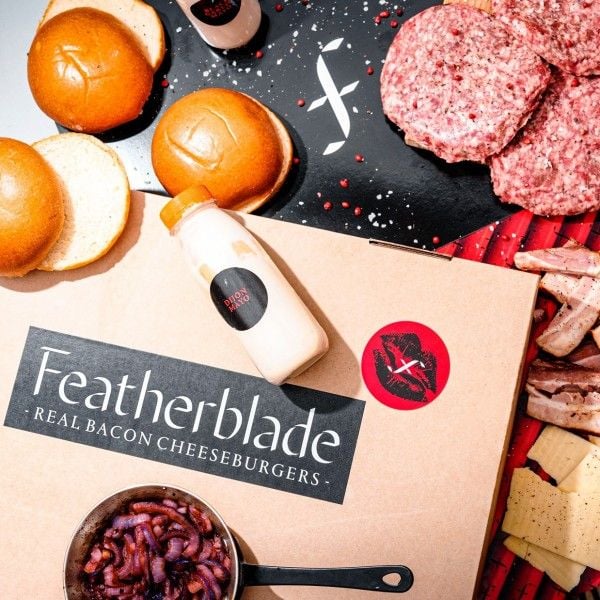 There is also their huge Meat Feast kit which costs €75.

As a new week begins, our attention moves to the BANK HOLIDAY weekend! 🔥🔥 Order our @Home kits early and get them delivered just in time for the feast-ivities! #pittbrosbbq #bankholiday #bbq #meats #bbqsauce

There is also the option to build your own box. Find out more and where they're delivering to here.

Build your own box! 🔥 ⠀ Head over to our website ☝🏻 to build your own BBQ in a box for the Bank holiday weekend 🙌🏻

Similar to the above, Woodfire and Green is offering burger kits for collection and delivery.

And that's not all. They also have a Lamb Kofta box, a Nacho box, a Fried Chicken box and Pizza box for collection and delivery.

Find out more about where they're delivering to here.

BuJo Burger is a fave amongst meat-lovers in Dublin and beyond. And they are delivering BBQ kits everything you need to recreate their burger magic at home.

Elijah managed to get his hands on a @bujoburgerjoint Home Kit 🍔 Mouth. Watering. Goodness. 🤤

Nice to meat you! Introducing the @tomahawkdublin BBQ Pack, full to the brim with all you need for the perfect home BBQ. Available now for next day delivery or contact free collection from @dollardandco⁠ ⁠ Visit our website for more details or ring us on 01 616 9612 to order.⁠ ⁠ #bbq #delivery #tomahawkdublin

Box Burger is delivering their delicious BBQ kits to Bray and beyond (find details of delivery locations here).

Available in Classic Beef, Chicken or Vegan, each box includes all of the super tasty ingredients you need to create your own box burger at home. You will also receive a simple five-step guide along with chef tips.

Plus, they're delivering cocktails as well.

Looking for inspiration for when you're at home? Sign up to our Lovin Home Comforts newsletter to get the best recipes, home workouts and TV recommendations straight to your inbox.

Five books to help make sense of your twenties

Lovin Games Weekly - Crash is back!