The proposed route for the Dublin Metro has been significantly cut short following concerns that part of the Luas Green Line would have to shut for two to four years during construction.

The original route would have seen the line running all the way from Swords to Sandyford.

Explaining the decision on the MetroLink website, they wrote, ‘Following the first consultation we reviewed the entire design of the route. Some issues affect the entire scheme. Others affect specific stations.

‘The big issues affecting the overall design are automating MetroLink, tunnel configuration and the arrangements in relation to the Green Line upgrade.’ 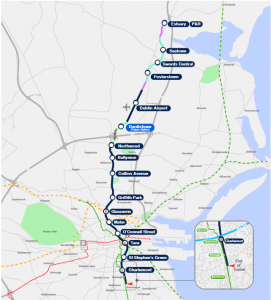 The National Transport Authority confirmed it will be upgrading the Luas Green Line so that the MetroLink can also run along it ‘at an appropriate point in the future’ but they don’t expect the feature to be needed for ‘perhaps twenty years or so’.

It’s thought that construction will take up to seven years and the line is now expected to open in 2027.