Dublin is now officially one of the most expensive cities in Europe to rent after entering the top five for the first time.

It’s overtaken cities like Paris and Istanbul for the first time, after climbing up from last year's number eight spot.

The study published by ECA International has revealed that the average price for an unfurnished three-bedroom apartment in the city is now €3,406 a month.

That’s compared to Paris which now sits at number six with an average cost of 3,324 a month.

The top four cities have all remained the same again this year- London is the number one most expensive, followed by Moscow, Zurich and Geneva. 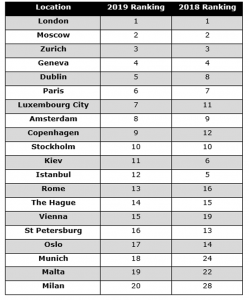 Alec Smith, Accommodation Services Manager at ECA International, explained, "The global financial crisis exposed a property bubble in the Irish capital and rents have increased significantly with each subsequent year of recovery.

"The cost of renting has also been affected by elevated demand from international companies relocating staff while looking to take advantage of Ireland’s low corporate tax rate.”

Meanwhile, Hong Kong is still the most expensive city in the world for expatriate rent, with an average monthly price now at around €9,661.