Last night, Niall took to Twitter to shed light on the current trend that sees successful Irish chefs rising to a certain level of celebrity before lending their names to larger international supermarkets. Having caused quite the stir on social media already, today we’re bringing this whole idea to the fore, asking you, dear reader, if this trend is a bad thing, if it’s completely harmless, if it’s an inevitability when you reach that level of familiarity or if it’s potentially throwing a spanner in the works of local Irish produce and the struggle they continually face. Niall - When I was growing up as a young chef, my hero was Marco Pierre White. He had three Michelin stars at the time and, when I was in college, I practically slept with his book ‘White Heat’ under my pillow. In my eyes, the man could do no wrong. He was the polar opposite to the conventional idea of a ‘celebrity chef’ and often relished the opportunity to slag said celebrities off for making a quick buck with anything from a range of celebrity frying pans to a string of self-promoting TV shows. Then, as his own status rose and he himself transformed into the very thing he had once defied, Marco himself sold out. It started with a TV show but was quickly followed by ads like this...

There seems to come a time in every chef’s career when they’re offered a hefty sum of money to promote products. It makes sense; the brands want a big name attached, the big name fancies the exposure (and, of course, the money). Niall got to thinking about it and decided it was a subject that required greater discussion and even debate, especially with regard to supermarkets here in Ireland.

Niall - While supermarkets are an essential part of daily life and make economic sense for us all, the stark reality remains that they have, as an unfortunate consequence, ripped the hearts out of Irish high streets, forcing butchers, greengrocers and bakeries all over the country to close. Some also have a reputation for squeezing suppliers to the limit in order to carve out huge profits for themselves.

While we don’t need to be concerned here about Marco Pierre or anyone else choosing to align themselves with certain brands over in the UK, we do need to think about what’s happening here in Ireland. Given our current situation, as we try to rebuild after the shit-storm that was the last few years, should Irish chefs be extra conscious about who and what they partner up with, and consider all knock on effects?

There is a huge battle on in Ireland at the moment to win over local shoppers. Such efforts stem from the likes of Aldi and Lidl coming in and shaking up the landscape, offering an admittedly great selection of new, non Irish brands at prices we just wouldn’t have found at our local greengrocers. Of course we were going to jump on that bandwagon, as the pennies jingled and jangled in our paltry pockets. On the flip side, we then have the Irish owned Musgraves doing their best to encourage local, having rebranded all Superquinn stores under the guise of Supervalu and offering daily deals to rival the international big boys such as Tesco. But regardless of whether they are national or international companies, if they’ve set up shop in Ireland, they’ll be well aware that Irish jobs are paramount right now and that’s precisely why the big marketing bucks are being spent to promote that important local message. But just how local can these international supermarkets be?

There’s no denying that despite taking customers from the Pats and the Marys sourcing their own local produce down the road, Tesco, Aldi, Lidl and more are certainly making efforts to reassure Irish people that they’re a help rather than a hindrance to the local economy.

Tesco, though British at its heart, has a damn good marketing team, claiming that more Irish produce is sent directly to Tesco Ireland than exported out of the country to the US, Germany or France. What’s more, Tesco pride themselves on working with a staggering 11,000 farm families throughout Ireland; the milk coming from Irish cows, the pork/beef and what have you coming direct from Irish animals.

Then you have Lidl who we are told source more than 40% of their products from within Ireland, while Aldi claim that more than half of the groceries they sell are Irish.

Graphic showing number of stores per brand in R.O.I. 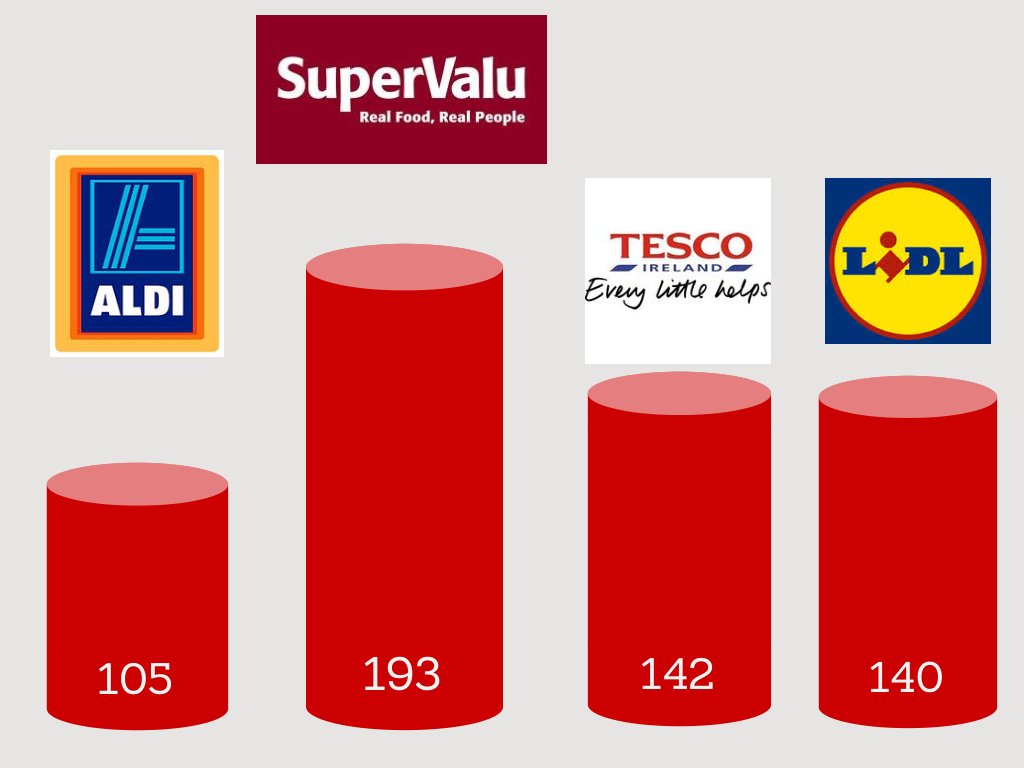 But while the above stores are clearly providing business for farmers and other various producers within the country, are they really campaigning for Ireland or are we just lead to believe that that’s their priority, in order to garner themselves more customers and thus earn them greater profits? While international companies operating out of Ireland certainly benefit the Irish suppliers who sell their produce to the supermarkets, isn’t it important too that the money made (when Tesco, for example, sells a mass amount of Irish beef) be circulated back into the Irish economy? That’s what you’d get with a company that’s 100% Irish, however with the likes of Tesco, all profits are likely to funnel back into their larger, international revenue stream. Is that of beneficial to the Emerald Isle? Arguably not.

If you are an Irish chef + do ads for supermarkets you have sold out and can no longer talk about sourcing "local". Discuss...— LovinDublin (@LovinDublin) March 4, 2014

@LovinDublin I saw your tweet this morning. Firstly you need to brush up on the amount of Irish produce in @lidl_ireland so I can stand over— Paul Flynn (@paulflynnchef) March 5, 2014

@LovinDublin my role without any sense of guilt. As regards supporting local, I have committed the last 17 years and every penny I have...— Paul Flynn (@paulflynnchef) March 5, 2014

@LovinDublin to setting up and maintaining a business which employs 24 ppl in a small rural town. I dont know how I could be more local— Paul Flynn (@paulflynnchef) March 5, 2014

Niall - Now Paul Flynn is probably one of the most respected chefs in Ireland. His restaurant is nearly as popular as he is himself and he has been one of the greatest unsung heroes of Irish cooking over the years who deserves a much bigger audience in my opinion. As you can see his food is sublime and I’ve never heard a person say a bad word about it. The only real grievance we have with him, if any, is that the the Tannery is too far away for us to pop into every day.

Given his success thus far, and all he has done for the Irish food industry, should Paul as a reputable Irish chef be expected to take more consideration of the knock on effects touched on above or should it be more of a personal choice? Surely he has paid his dues by now. What’s more, in Paul’s defence, if you do want to go down the brand ambassador route, what you associate yourself with depends on what offers come knocking on your door, especially given the size of Ireland. Perhaps if all celebrity chefs had the opportunity to collaborate with 100% Irish companies, they’d jump at the chance. Kevin Dundon who works alongside the Irish SuperValu is one of few to have struck the pure Irish gold.

Niall - Personally I groan when I turn on the TV and see a chef promoting a big supermarket no matter how much background checks they've done. Having said that they are getting a lot of money for doing very little work, and they probably deserve that luxury. Building a restaurant up over years, hiring staff, sweating over bills, cleaning out deep fat fryers and all the other stuff that goes into making a restaurant great is a hard slog. The guys might be getting paid good cash but they’ve probably earned that over decades of hard work. These days there’s very few Irish chefs who aren’t hooked up with supermarkets, but is it right? If I'd stayed cooking for another 10 years, had a couple of restaurants and was fighting to pay the bills and a large international supermarket came along and offered me a cheque, would I take it? My knee-jerk reaction would probably be to bite their hand off and book a holiday to Barbados there and then. It's all hypothetical of course because I'm not in that position but if I sit back and think about it, while it’d make a wedge of cash for my own back pocket, it wouldn’t exactly serve to remedy the larger issue at hand here. Of course this is dependent on circumstances but to think that all of the money generated from these companys' Irish efforts is going into Irish producers pockets’ is total rubbish. Lidl and Aldi are German companies. Tesco are from the UK. Their main focus is their shareholders and reporting back to their own countries, not Ireland. There might be cases where playing the Irish angle is the core mission of the company but I've worked in marketing and with plenty of large brands and all this is is excellent marketing. Tesco and Aldi are about as Irish as Champagne is. 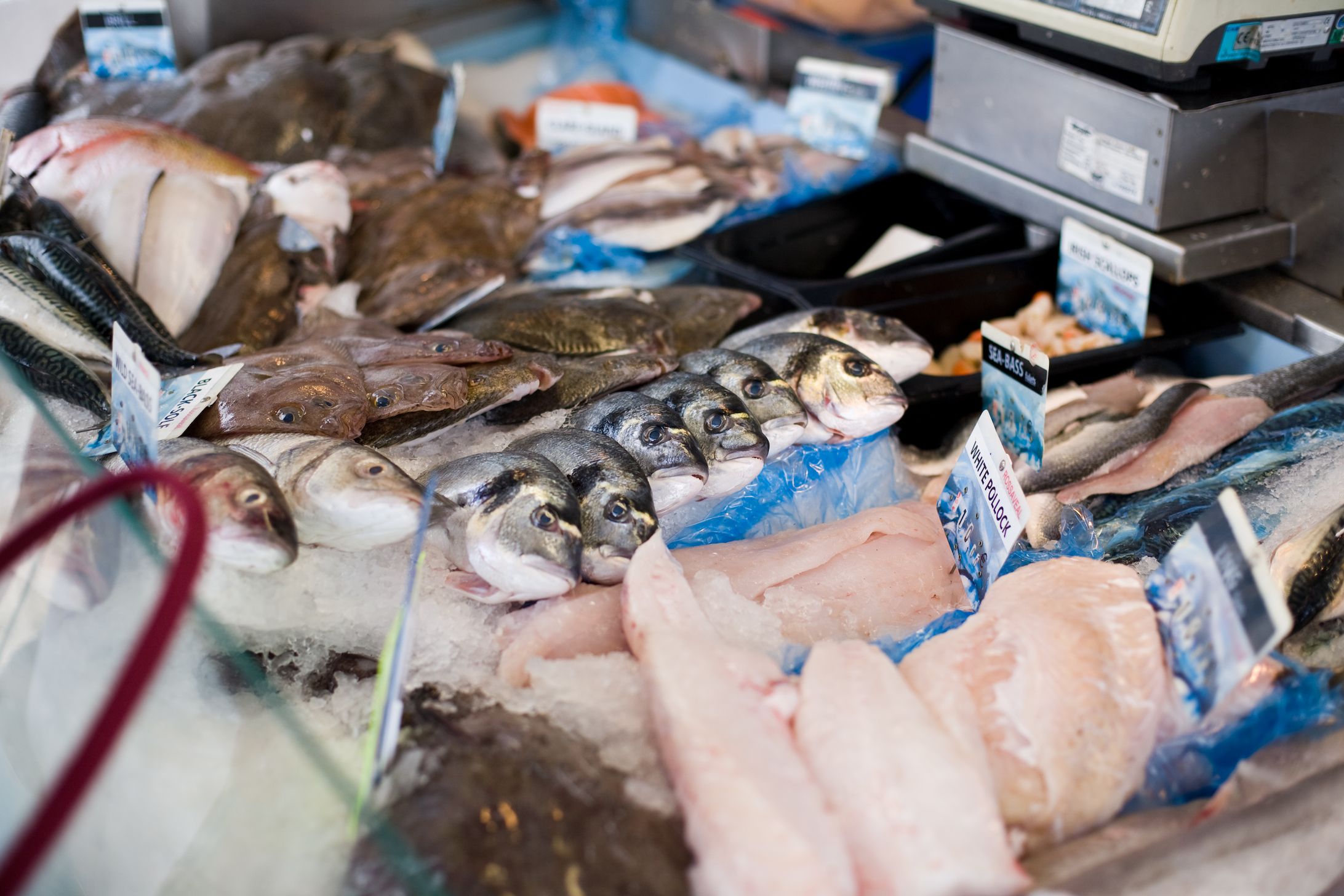 As for Niall and his former hero, Marco?

Niall - I hate the fact that Marco sold out. I lost 50% respect for him overnight. I still have a huge picture of Marco above my kitchen. It inspires me when I am cooking and forces me to be better all the time. It is a picture of him in his White Heat days with the mad stare in his eyes, though. It certainly isn’t a picture of him talking about the new Knorr stock pots. Having said that, when I turn around and reach for the chicken stock it is always Knorr in my cupboard, so maybe the joke’s on me. And that’s the thing, this is all just about marketing and brand building. It’s a free world out there and people can promote what they want, make money how they choose and shop wherever they feel most comfortable.

Quite the two-sided coin we have, what's your take on it all?