You don't have to be a genius to realise that us Irish have a serious problem with the gargle. Take a walk down Camden Street at 2am from Thursday - Saturday or hang around the Off Licenses on Thomas street at 11am to see it at its worst. We binge drink. Our city is littered with drunks and I'm not talking about people sleeping rough but people from every corner of the city boozing to excess. The girls totally shitfaced falling across the street with no clothes on outside Wesley. 1500 people nearly crushing each other to death to get cheap Monday night pints. Our emergency wards straining every weekend from drink related injuries. I could keep going with a long list but perhaps the biggest indicator of the problem we have is the sight of people buying huge quantities of booze the day before Good Friday every year.

Ah the day before Good Friday or National Off Licence Appreciation Day as I like to call it.

You Can't Force Religion Onto Me

I've had this blog post in my head for a few months but it is the most ludicrous example of our licensing laws that made me pull all the strands together. Today is Good Friday and most of the country have a day off and although I am not religious it could only be divine intervention that is sending this sort of weather to us in early April. Despite a day off and the sun on our backs though we are not able to have a drink. It doesn't matter if you are either an atheist, a Jew or an Arab because unless you check into a hotel you simply won't be able to enjoy a tipple. Although the country is mostly made up of Catholics I have very few friends (I know 2) who ever go to mass. The church has lost much of it's credibility and for many is just no longer relevant yet we are all forced to live by their rules? I've no problem with Catholic people abstaining from their booze today and not eating meat but we live in a democracy and the rest of the country should be left to live their lives as they choose. 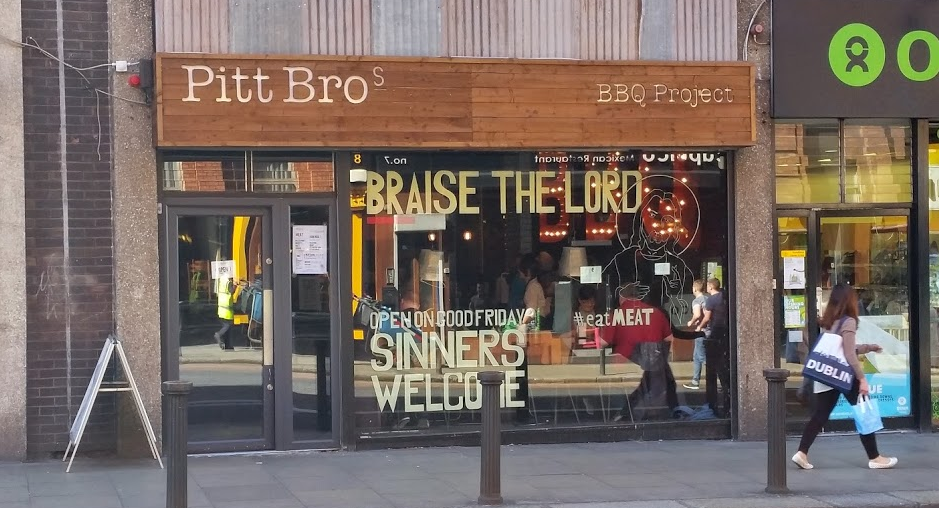 Imagine what all the young international workers in our country are thinking when they walk into the shop and see the wine section blocked off by toilet paper or people carrying booze out of off licences on a Thursday as if Putin was sending in the tanks and we needed to stockpile for the next 12 months. Everywhere I look this year I am seeing mocking of Good Friday and a new attitude.

The Law Is Bullshit

I walked around town today and although all pubs are forced to close and many restaurants take it as a day off there was still plenty of booze to be seen. Indeed in Odessa where I had lunch people were happily drinking bottles of wine (I'm sure they hap a loophole being a club or something). I saw the same in 3 other restaurants from peering in the window. Hotels are allowed to serve booze as are sporting events (like the Leinster game in the RDS today). What sort of fucking madness is this? Either you can serve booze or you can't. I always get a strong backlash when saying that Dublin should copy other cities. We shouldn't replicate everything they do because we are unique and special ourselves but we should cherry pick the best parts. Take Berlin for example. I can buy a large bottle of beer, drink it in the street, riding the underground and even take a crate of beer to the park with my mates to enjoy on a nice day. Because you get a small amount of cash back on every bottle returned people clean up after themselves and there are never any issues. God help you if you tried to enjoy a craft beer on the Luas or sip some wine with your classy picnic in St Stephen's Green in Ireland. Those big burly Eastern European security guards would have you in an armlock with the guards called for the horrendous offence you'd caused. I grew up in Belgium and you could buy beer from a vending machine on pretty much every corner. Funnily enough though you never saw the same amount of drunks littering the streets.

The authorities treat us all like children when drinking in Ireland and as a result we go absolutely mental and take things to the other extreme. Tell me I can't drink on a sunny Good Friday when I'm off work and the result is I'll queue up and buy 2 cases of beer the night before or go to an illegal barn dance and get smashed on Vodka. People drink like the world is going to end and I'd guess we drink way more on good Friday than any other normal Friday. Other cities on the continent have a far more liberal approach to booze and it is about time the powers that be started trusting us a little more. The Changes We Need

If we are to continue improving this city and making it into a capital that can compete with others around the world we need to make some simple changes to our licensing laws.

The big problem is of course that pubs in Ireland are powerful. Lobby groups have lots of money. Many politicians actually own pubs or are hooked up with people who do. Pubs had it so good in Ireland for so long but their time is slipping away. They'll cling onto the current rules for as long as they can but the consumers will win out in the end as we shift to a cafe culture. It is up to us to put our foot down and demand new licensing rules. I'm grown up enough and wise enough that I should be allowed to go into a shop and buy a bottle of beer after I finish a hard days work at 10pm to drink in the comfort of my own home.

The big legacy here was the Catholic church and in previous years people still had some respect for Good Friday and were cautious about it. This was the first year walking around Dublin that I felt the tide had changed. Most people don't give a shit about religion and would just like a nice glass of wine in the sun. Some places are already flaunting the rules. I'd urge 50-100 pubs or restaurants to just get together next year and say "fuck it we will serve booze" and see what happens. I'd imagine legally there wouldn't be too much trouble and public opinion would be on your side.

The great things happening in this city are coming about through entrepreneurship and by people taking chances. They are happening despite the authorities and not because of them. It is time for change as our city continues to become a better place.