Do you remember the height of the boom when bouncers used to turn you away for not wearing the right shoes, being under 25 or not having enough 50 Euro notes hanging out of your trouser pockets? Money was washing through the streets and the bigger a douchebag your bouncer was and the harder it was to get into a place the more popular your club or bar seemed to be. Inside Champagne and cocktails flowed at the same rate as the Liffey does at High Tide of late and people partied like they'd just bought a holiday home in Bulgaria. Then came the crash and suddenly restaurants and bars were fucked for customers and did anything to attract them in including special offers and super service. Well there are signs that we could be heading back to the dark days with the door policy in popular Dublin nightspot 37 Dawson Street leading the way. I get emails on a regular basis about this and hear people giving out all the time. I was trying to ignore it after slating their sister place a few weeks ago but when I heard 2 more instances of it in person over Christmas I decided it was time to call them out...

I only really see tweets that have appeared within my own network and what friends are telling me in person but I'm guessing if the small network I know are having issues then this is probably something that lots of Dubliners have been experiencing?

@seanfee80 joke of a place when it comes to door. Haven't been near it since being accused of being drunk (had come straight from office)

@anthonymcg me neither, they're a disgrace

@seanfee80 No, but after reading of your problems (and others) I will never attempt to enter

@seanfee80 Pretty much all of Dublin and it's surrounding areas have been turned away for their footwear or being drunk while clearly sober.

@seanfee80 Mail management. I did and they were very apologetic and accommodating to resolve it. I'm shocked this continues unchecked.

You know Celtic Tiger is back when @37DawsonStreet reject 25yr old, with a passport, for 'looking too young'. Hope they go under

Vote With Your Feet

This sort of shit has to be stamped out in Dublin. There is a clear policy here and it is aimed at making the place super exclusive and creating demand and buzz around Friday and Saturday nights. You don't have to look far to see comments from people complaining that the management got back saying they were incredibly sorry and that it isn't company policy. I'm sorry but that is bullshit. The apologies are stretched over the last 6 months online so nothing is changing. They know exactly what they are doing and the false apologies just make it worse. What right does a bouncer have to look you up and down and refuse you entry based on your appearance, age or shoes you are wearing? I'm no legal expert but I'm pretty sure that is discrimination and pretty much frowned upon. The place is still popular at the moment and that probably won't change soon because it is a pretty cool spot that plays awesome tunes, has a cool whiskey bar and serves nice food but that might not last forever. So much is improving in this country with great restaurants and cool bars leading the way but we just don't have time for this sort of bullshit anymore. The two bars that this door policy reminds me of most from the boom times are Cocoon and Renards where your night out would depend on the bouncer and what you were wearing. Both of those bars were in the same area and you won't be surprised to hear they are no longer around. Seriously 37 Dawson Street have a think about it and stop making your customers feel like shit, it won't work in the long run. Just ask Ryanair. 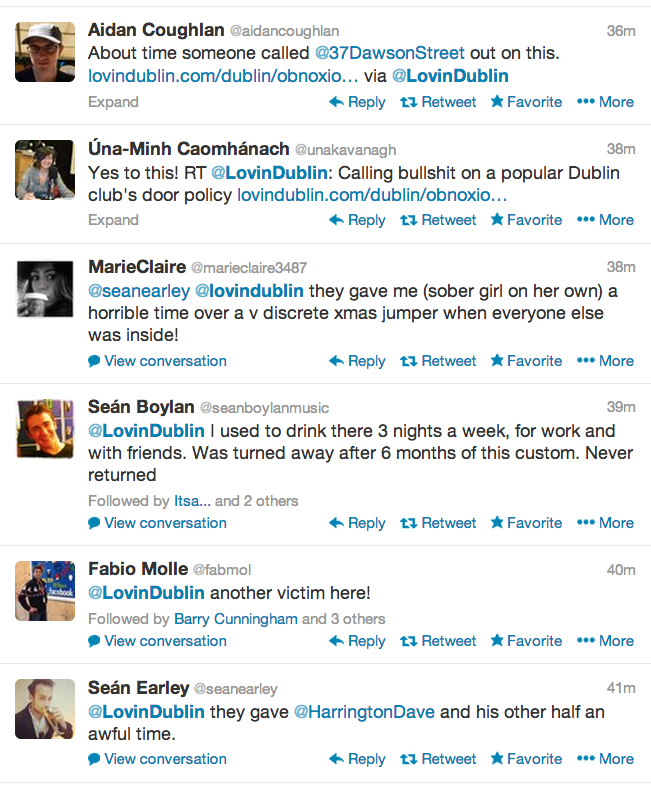