Messing or not, posting this in the middle of the crisis was not a wise idea

Well, that was a bizarre few minutes at midday on Thursday.

Oh, you missed it?

We'd say that we're surprised you didn't come across it but then again, it did last about 15 minutes.

Just before 12pm on Thursday, Dublin Airport said that they would cease all flight operations because of this drone sighting over the airfield.

As news began to spread rapidly around the world - which is understandable considering the hassle that the one above Gatwick caused a few weeks ago - it was over just as fast as it had started.

Dublin Airport confirmed at around 12:10pm that flights were resuming as normal and that the precaution was taken because "safety and security of customers is our key priority at all times."

Some were curious as to what was going on, others were panicking and wondering what would happen to their friends/family/their own flight that was scheduled to depart or land at the airport.

And then, of course, there were a few jokers who posted tweets up of pictures above Dublin Airport saying how they had snapped them with their drone and how the airport was so quiet. 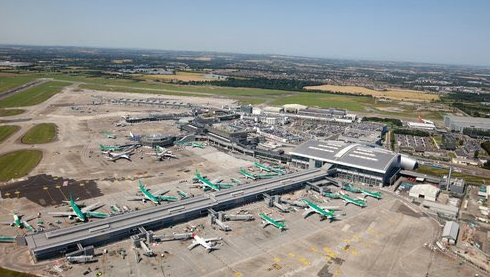 Good thing that the sighting wasn't more threatening, or Dublin Airport would have had to look into these tweets a bit more seriously.

A bit of craic? sure.

But messing or not, posting this in the middle of the crisis was not a wise idea.

A spokesperson for Dublin Airport released a statement saying that:

"A pilot reported a drone sighting to the Irish Aviation Authority (IAA), which operates air traffic control at Dublin Airport, at about 11.30am.

Very shortly afterwards, and having contacted other aircraft in the vicinity, the IAA suspended flight operations at Dublin Airport in line with agreed protocols for confirmed drone sightings.

A 30-minute suspension of flights was implemented by air traffic control at that point, which is the agreed procedure in such cases. As there were no further drone sighting within the 30-minute suspension period, Dublin Airport resumed flight operations shortly after noon.

The Gardai and other State agencies were informed of the incident immediately. It is illegal to fly drones within five kilometres of an airport in the State and all drones that weigh more than 1kg must be registered with the IAA.

The safety and security of airport users is daa’s key priority at all times and staff at Dublin Airport, the IAA, and other agencies continue to remain vigilant in relation to drone activity in the vicinity of the airport.

Three flights were diverted due the suspension of flight operations and there will also be some knock-on delays to flights today."

A New David Attenborough Mural Has Just Appeared In Dublin

PICS: You Can Rent This Shed In Someone's Garden For €1,200 A Month