Love was in the air in Harry Byrne's pub on Valentine's Day.

Staff at the famous Clontarf pub kept their social media followers on the edge of their seats after deciding to provide Facebook updates on a first date they had spotted taking place.

A first date on Valentine's Day is always a bold move, which made the Harry Byrne's staff take their responsibility on live-blogging the exchange very seriously.

The first post, shortly after 9pm read: "Lads. We have a first date in the pub. Updates to follow......"

After asking some questions about the young man's choice of attire, the updates took a positive turn.

"Things appear to be going well," read an update at 10pm.

The live-blogging was nearly thrown into disarray when staff believed their cover may have been blown but the updates resumed at 11pm.

Champagne was ordered, change was gotten from the bar and a celebratory photograph brought an end to a romantic night at Harry's. 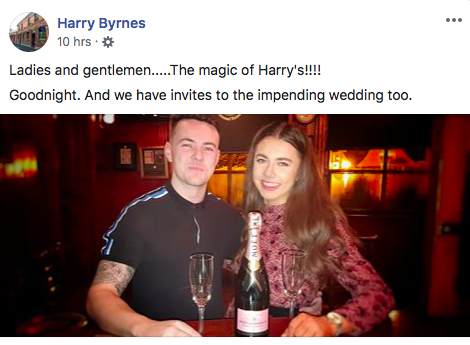