Is your name Karen? Have you studied in NCAD? If the answer to either question is yes then you better steer clear of The Bowery on Rathmines Road.

The pub has posted images of its 'banned customers' list and while some will having you nodding in agreement, others seem a little bit harsh.

For example, according to the sign, chicken fillet rolls are unwelcome at the pirate-ship themed music venue. Presumably, this has something to do with a 'no outside food on the premises' policy because we can't think of any other reason.

'Anyone called Karen' and 'Gav's Ma' are others who may feel hard done by but the likes of Trump, Harvey Weinstein and R.Kelly are obviously justified. Based on the reaction to Game Of Thrones season eight, many fans won't be too upset about the TV show's creator David Benioff being on there.

We're also completely on board with banning The Simpsons post-2000 but wrestling legend the Ultimate Warrior? He died five years ago, lads.

Check out The Bowery's full banned list below to see if you made the cut. 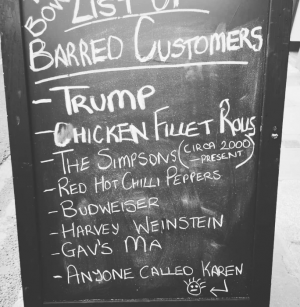 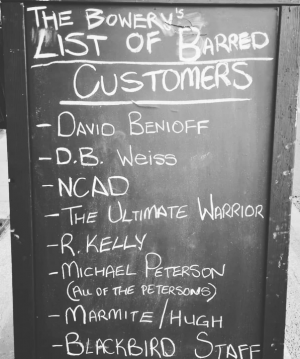 READ NEXT: Dublin Diners Devastated As Luna Closes Its Doors