We live on an island. A tiny little island that if you go West borders a massive and incredibly deep Ocean that is full to the brim of fish. Even taking into account the thieving Spanish bastards and their dodgy trawlers or the supertankers producing shitty Donegal catch and tins of John West tuna there should be enough fish to feed the few million of us on our little island. Why is it then that despite all those vast resources Irish restaurants (and supermarkets) serve us up such a broad selection of below average shite? I don't believe the overfishing malarky either. Sure it might be hard to get a thick piece of chunky Cod these days but mussels, Oysters, mackerel or Hake shouldn't be hard to come by. The problem is we don't try. We don't tap in to the most wonderful resource in the world. Most of our chefs are lazy bastards. I know before even opening a menu these days I'll see Monkfish, Fish and chips with tartar sauce, prawns (usually with either chorizo or garlic) and scallops (usually with black pudding or pancetta). Thats just pure and utter laziness. Why don't we have more seafood bars and restaurants in Dublin? Why are menus packed with steaks, chicken and pasta when we live on the edge of a massive fucking ocean? These were all questions I asked myself as I walked in to Matt The Thresher a restaurant which mostly sells itself on being a seafood experience... 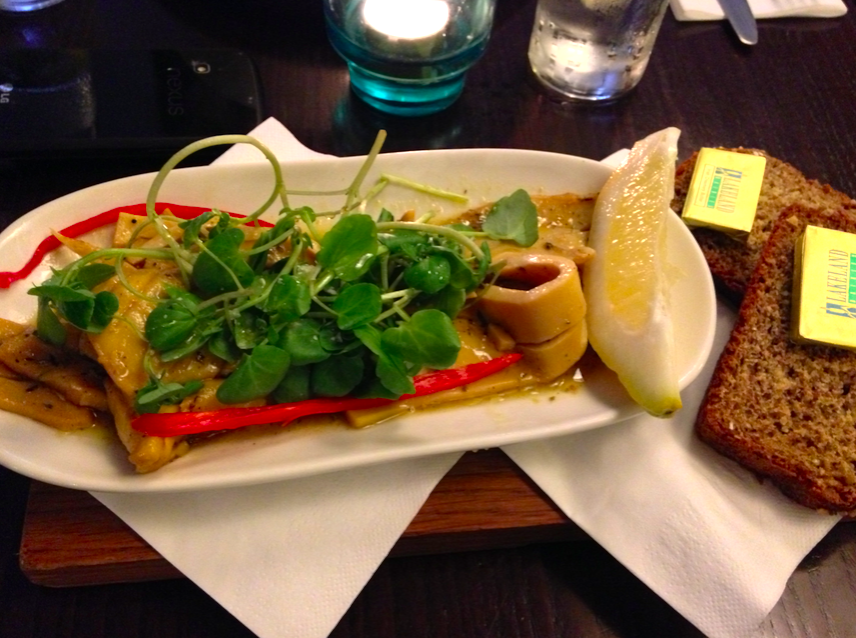 I was early so I said I'd go in for a pint in the pub beside Matt The Thresher that I remembered being there on Pembroke Street. Much to my amusement and after a few bewildered looks I discovered the pub had actually been converted into the restaurant itself. A sign of the times with over 50% of pubs in this country struggling to make money. First impressions when walking in were good too with a big fridge full of huge fish greeting you. It all looked fresh and tasty. They've done a good job renovating an average pub into a fine dining restaurant. The crowd were a mixture of geriatrics and American tourists (is there a difference) and we looked a bit out of place in our hoodies and runners. Fuck it I thought our money is as good as any. I actually wanted the place to be fancier though. I always picture seafood bars to have waiters in pristine white aprons carrying large platters around while popping glasses of champagne for fat city bankers. The seafood equivalent of Shanahans if you will. I guess those days are gone in Ireland for the next decade anyway. 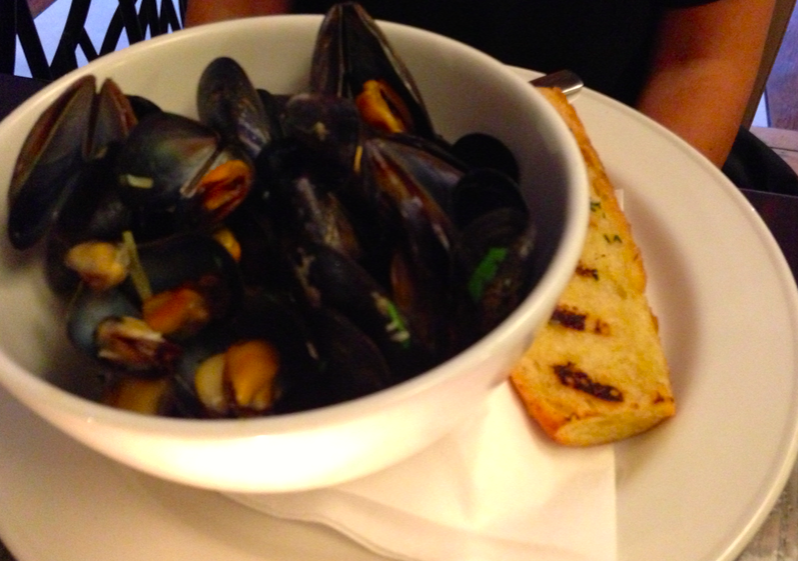 I started with Squid. It was shit. Perfectly soft and tender but it had some vile curry sauce that made it pretty inedible. Why you'd serve a lemon wedge with curry is beyond me. Thats like putting a Gucci necklace on a hooker. Id go as far as saying it was vile. I wish I'd gone for the mussels because they were plump, simply cooked and succulent and I had a serious case of starter envy. Am I the only one who always ends up eating something rotten while everybody else tucks in to what I actually want? 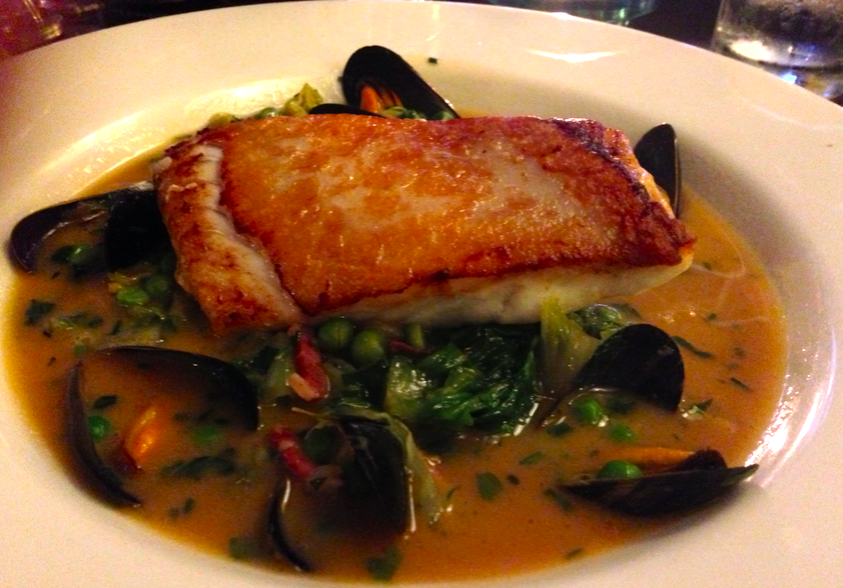 Mains were better. I went for what is in my opinion the king of fish…Turbot. If you've not had it before try it because the texture, flavour and chunkiness of it are outstanding. The perfect fish for newbies to try out because it doesn't have that "fishy" taste that people often complain about. It was severed in a delicious pea, mint and pancetta broth with some of those famous mussels. Sweet, salty, light and a perfect example of a fish stock based sauce. The only downside was a bit of mashed potato at the bottom of the fish under all the broth which was sort of pointless. Mash in a broth? Stupid. The other main was salmon. Sounded delicious on the menu (pearly barely and tomato) but on closer inspection it was served cold. Because of the over reliance in this country on salmon (weddings, carverys etc) i hate the stuff. The only thing worse than salmon is cold salmon for a main course. It reminds me of the shit aspic (a weird jelly) dishes they teach you in cooking school. You actually couldn't have paid me 50 Euros to eat that dish never mind pay for it out of my own pocket. I know some people do love salmon though so whatever you are into yourself. 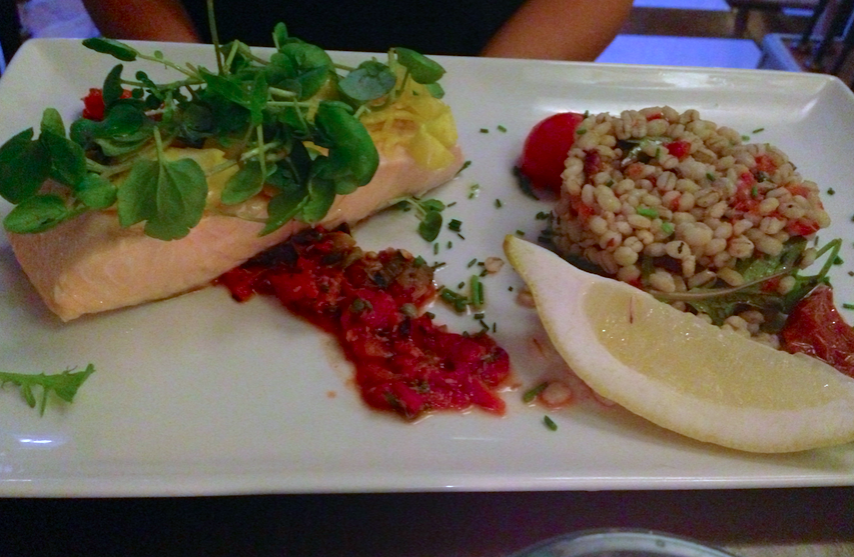 So a 50% strike rate across all dishes. Half very good half were shit. It feels like the sort of place that if you choose well and filled yourself full of white wine (we weren't drinking) you'd have a great time. We left nicely full and mildly satisfied but I wouldn't be in a huge rush back. I was hoping this would be the classy Dublin seafood bar to rival anything in London, Paris or New York as a spectacular place to go for birthdays or special occasions but it isn't. Its just another example on the vast list of places in Ireland not using our seafood resources to their max. When will a restaurant open that serves huge pieces of white flakey fish or grilled macherel with a simple parsley sauce, lemon, a few boiled potatoes with some steamed green veg? Give me a simple menu with 6 types of fish and either fried, steamed or grilled. Thats all the choice I want. Do this right and you'd make a fortune. 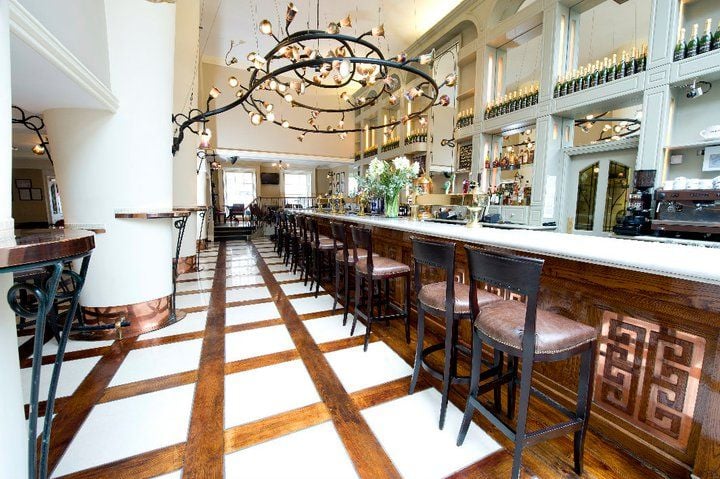 Matt the Thresher isn't overly bad but it's not cheap and the atmosphere isn't anything to write home about. Next time I'm looking for fish I'll go down to Cavistons and buy my own and cook it at home. Either that or somebody hurries up and opens the city centre fish restaurant in Dublin that we all deserve.

I'm only one person eating there on one night and with a view to giving you some balanced opinion here are some views from other people who have reviewed the restaurant...
Independent
Gastronomics
The Cooks Belly
Mummy Pages
Style Siren