So I got in trouble before Christmas for slamming the North side of Dublin and their shit restaurants so I decided to do the only thing that would appease people this week would be to go to a Dublin 4 Lobster restaurant. I considered it a treat since I have to navigate the North side to get to the airport this week and if I'm going to get stabbed I might as well have a decent meal before doing doing so. All joking aside I'm actually going to do a review from North of the river next week given that losing half of the already tiny audience of this blog in the early days by pissing them off is probably not a good idea and there are a few Michelin stars floating around over there. Also I'll be taking the port tunnel to the airport so don't worry about me too much. So I'm on the dreaded January health buzz but since I write this blog I've convinced myself one decadent meal a week is still grand. Fed up with all my usual Sunday brunch spots and looking for a real treat I stumbled upon Rock Lobster. It's a surf and turf joint with a serious focus on quality and I felt like I'd hit the jackpot reading the menu. Boom bring it on I thought. 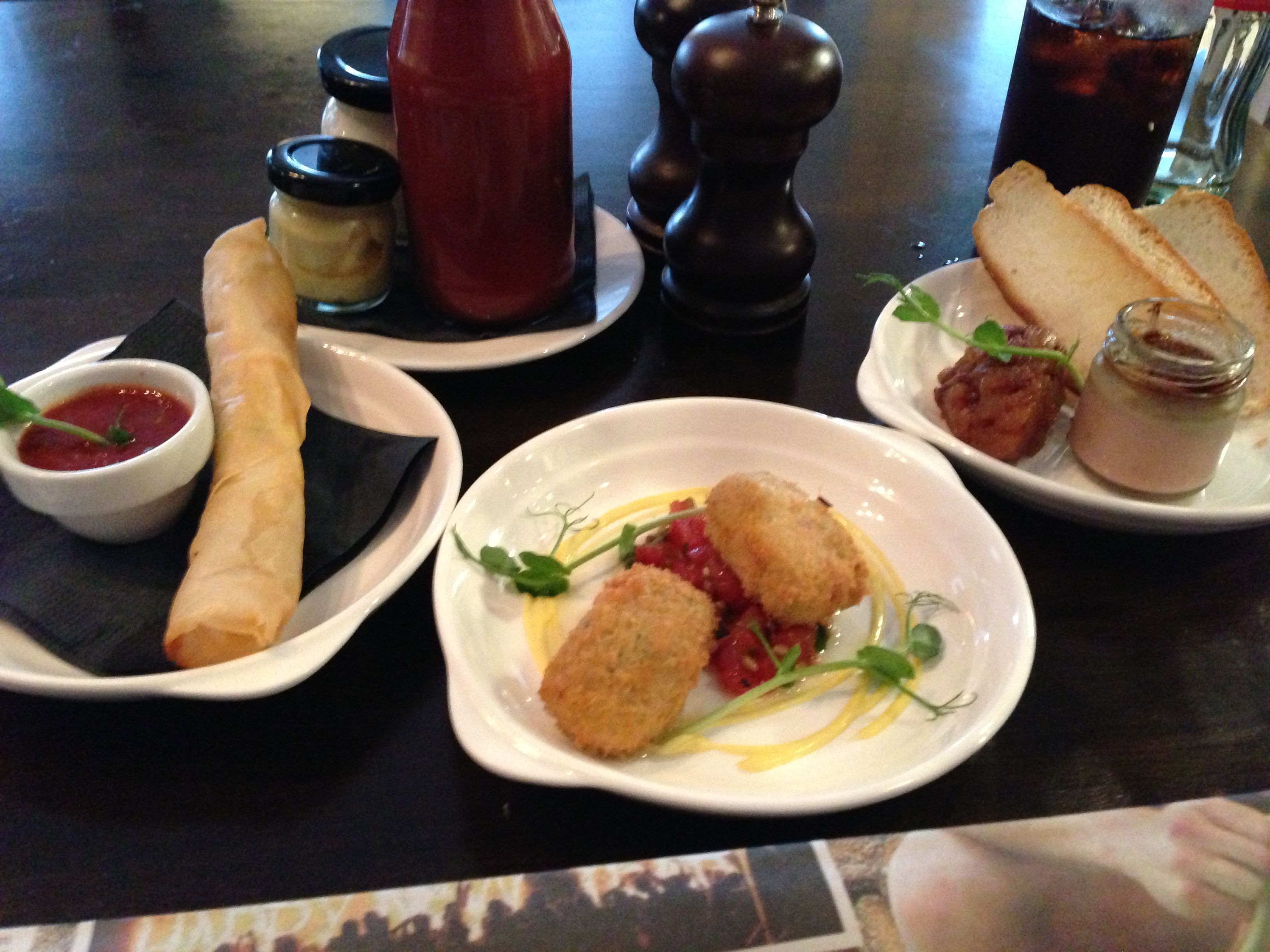 It's in the room right above Kieleys which is about as big a rugger bugger pub as you can get to the extent that I can't drive past without thinking of Ross O'Carroll Kelly. The menu is awesome. One of those huge 1 pagers that has about 50 things on it that you want. I started with a trio of starters for 10 Euros. There was a St. Tola Goats Cheese Cigar, Chicken Liver Brulee and Lobster Thermidor Croquette which were all served with delicious bread and butter. Now the startes as you can see were all wonderfully presented and tasted amazing on their own. Together though they were a disaster. There were just too mant tastes going on including...lobster, livers, onion compte, goats cheese, saffron mayo, salsa etc etc. It was a perfect collection of ingredients all well cooked and presented but when eaten together it was just like a big mouthful of fat. This was a Manchester City of starters. I wonderful collection of individuals but they didn't work together as a team. You could probably argue that I was a dick for ordering that combination and that it was probably meant for two people but I didn't really give a fuck as I was only here for the lobster anyway. Pn reflection I don't even know why I ordered a starter. 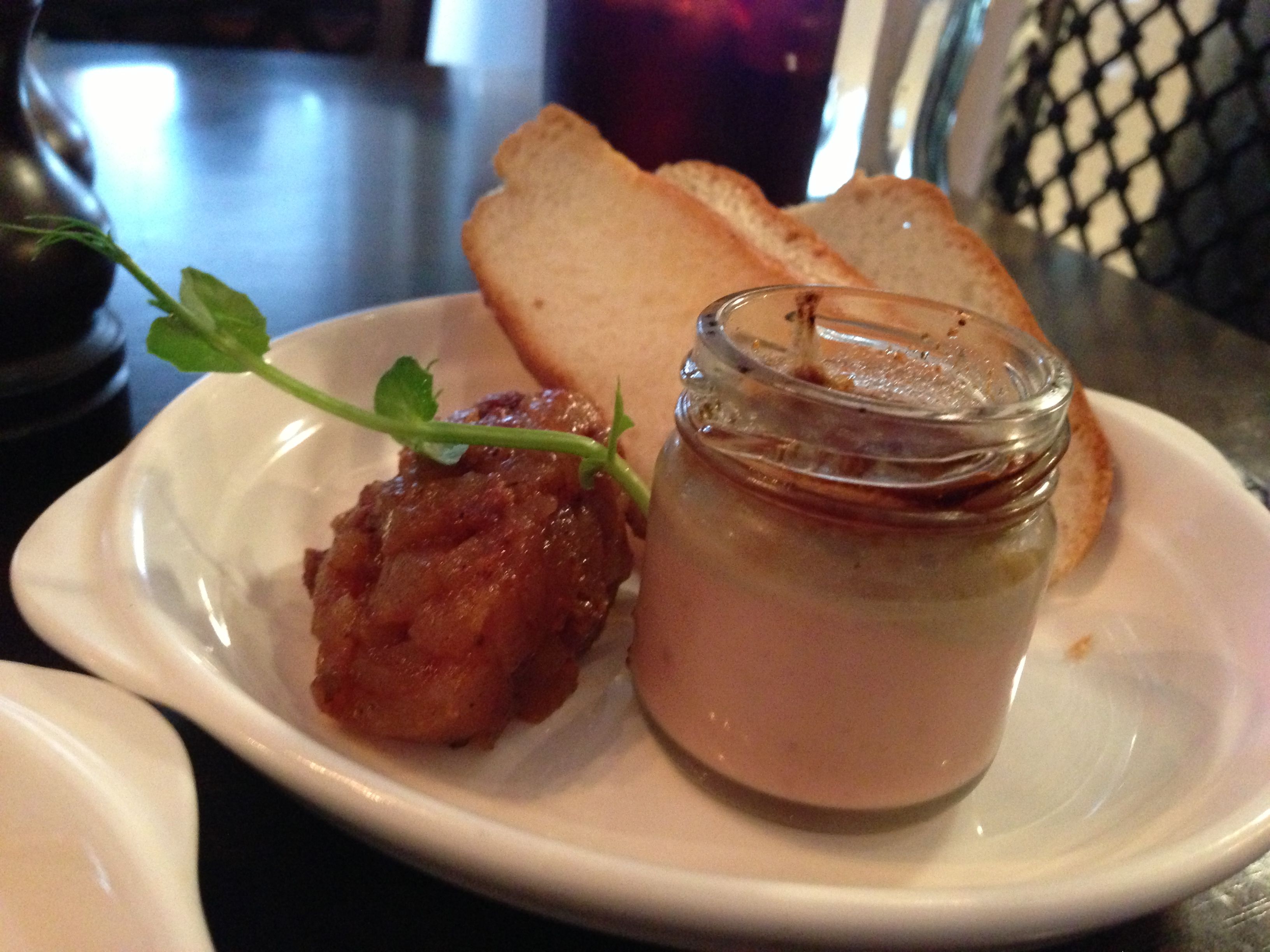 So as I sat back and waited for the king of the ocean to be delivered steaming hot to my table when suddenly I saw a small bowl heading my way. What sort of a fucking lobster fits in that bowl I was wondering. Except it wasn't a lobster it was a little free course. Slice of duck with cherries and sweet potato. Being the dick that I am I presumed the whole restaurant had been reading my blog and were trying to bribe me but I soon came back to reality when I started to see other tables getting freebies as well. Free courses are cool and you should never look a gift horse in the mouth and all that but I really couldn't be bothered with my fiddly little duck despite it's gorgeous presentation and it being a freebie. From a restaurant's perspective it's a great little trick to make regular punters feel special for the price of a couple of duck breasts. 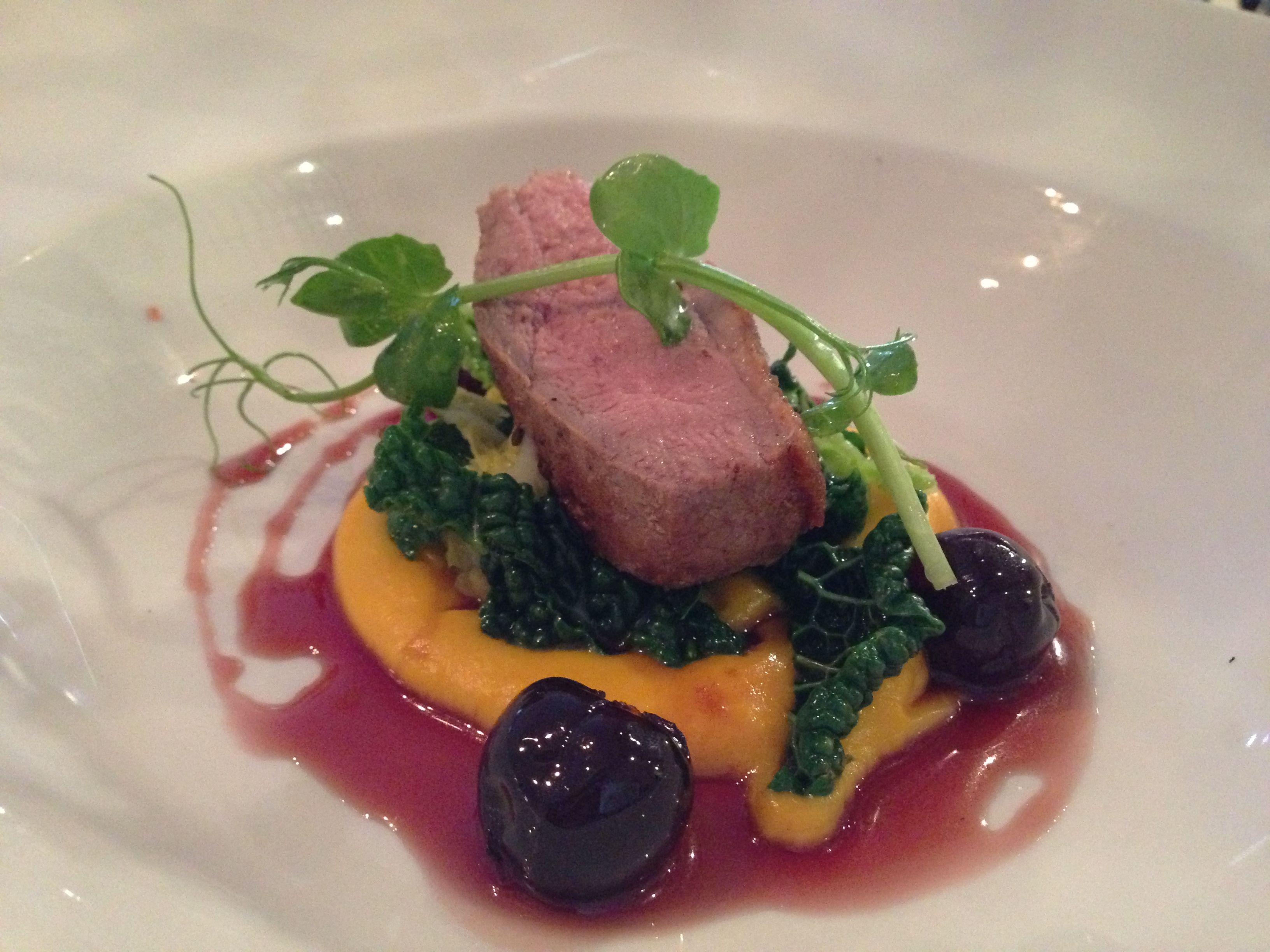 When the lobster did arrive it was absolutely insanely and ridiculously fucking awesome. I mean melt in the mouth cooked to perfection death row dinner excellence. Perfect chips and a side salad with a load of herbs and this was heaven. For some reason somebody a long time ago decided that melted butter should be served with Lobster. Why would you take the tastiest meat known to man and need to drown it in fat. I had a ton of melted butter in a little pot but I wisely ignored it. I nearly couldn't finish it there was such an abundance of meat but given that the poor little fellow had given his life for my enjoyment I felt duty bound.
So a wonderful meal but let me explain why the place is fucked...A couple of reasons. The first is simple and that is the location. If this place was in Ranelagh or town it would be rammed every night and you wouldn't be able to get a seat. Far worse restaurants will have more business simply because of their location. Donnybrook is that weird end of a dual carriageway waste land that is kind of D4 but there isn't really much to do there unless you are under 16 and going to Wesley. Restaurants live or die on their location and this one is suspect in my book. Lots of wealth around but do I want to go and eat above a pub? Probably not. 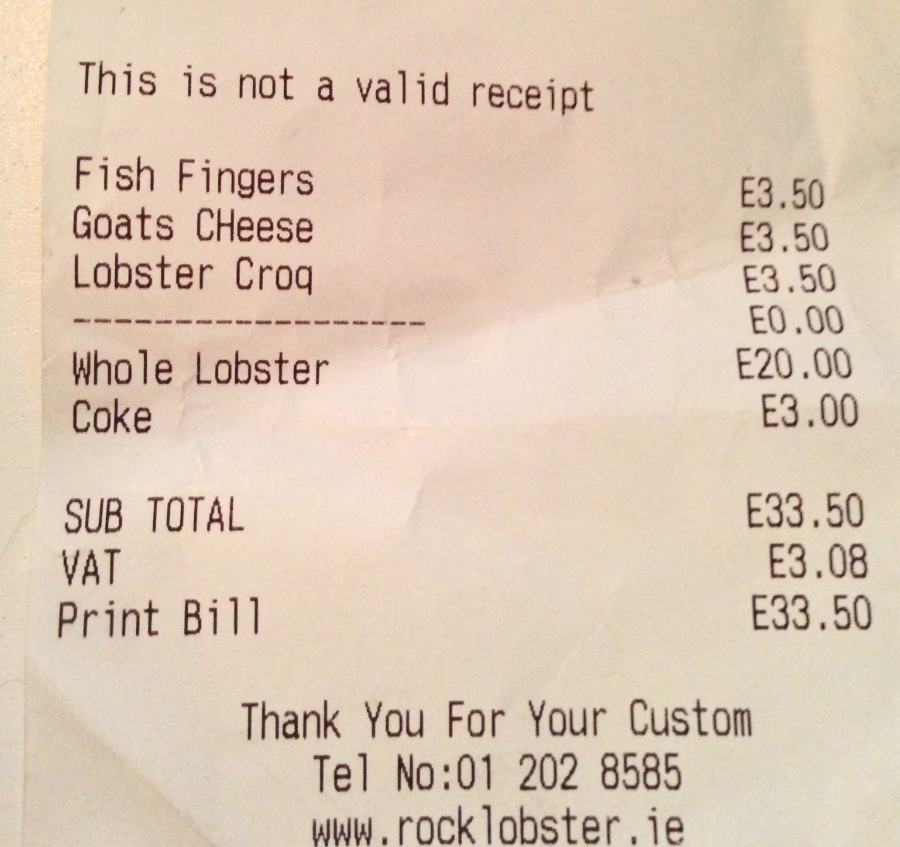 The second reason is the price. Everything that I ate cost me 33 Euros as you can see above. How you can afford to run a place that serves 3 starters, a lobster, a coke, bread, water, chips, condiments, offers great service, clean tables, hires chefs, pays rent, electricity and all the other running costs and expect to make a profit on 33 Euros is beyond me. I'm not complaining but that meal was worth 60-70 and I'd have happily paid that much. I felt by paying 33 I was taking their trousers off and doing them. I mean a pizza and a coke in Milanos is 20 Euros and this is Lobster for Gods sake. Maybe they run a tight ship but I just don't see the margins there for this place to be a success. I hope it is though because they deserve it. Move it in to town, double the prices and it will fly but leave it where it is and I wonder. Make sure you head in though because you'll fell like you are getting the deal of the year and it is finger lickin good.