January. Who in the name of fuck came up with the idea of putting the worst possible month after the happiest and most joyous time of the year? Why not wedge January into the middle of July and August where it would be more palatable and start the year of with March instead. You'd have Paddies Day, Easter Eggs and a awesome sport to ease you into the new year. Given that nobody seems likely to change this ridiculous calendar sequencing we are stuck with January the coldest, wettest, stormiest and most miserable month of the year where we not only happen to all be broke, fat and unhealthy but are also expected to "change our lives" and adopt ridiculous new resolutions that nobody in the history of the world has ever stuck to. I'll stop a lot of things I said to myself as I walked into town but I'm not going to stop eating good food. Food makes me happy so January can fuck right off and kiss my ass. The most regular question readers ask me is for more brunch suggestions which given that it by some distance the best meal of the week I'm not surprised. It is cheap, features plenty of pig and you don't even have to wait until lunchtime to start eating proper portions like you do during the week. If it weren't for January it even sometimes comes with cocktails. What's not to like? I'd kinda heard of Hatch and Sons before but I had no idea it was literally on St Stephens Green (top of Dawson Street) as I walked downstairs. 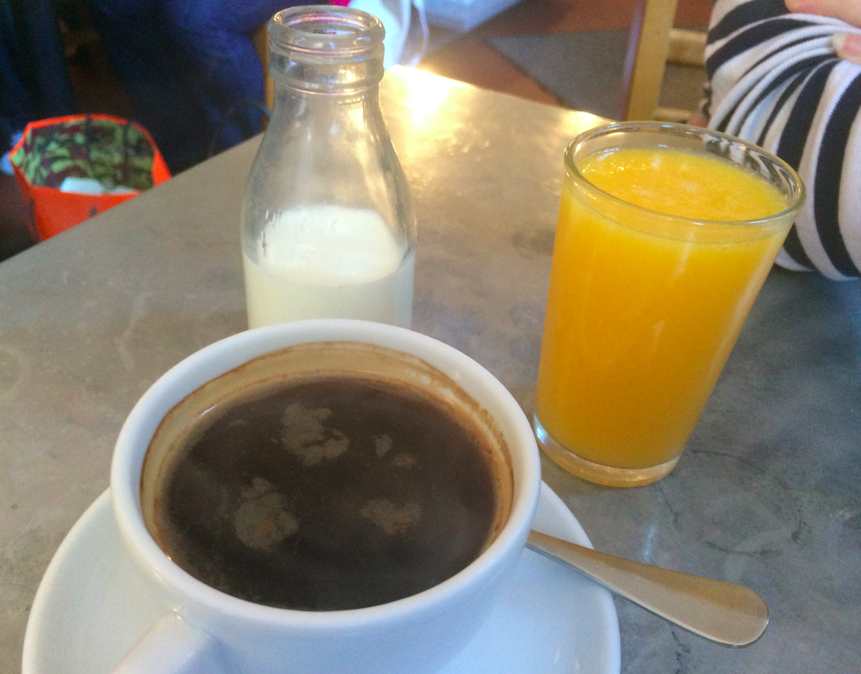 I was expecting to walk into some fancy douchebag laden place with airs and graces given the location but it was like walking into a farmhouse in Kerry. It feels like you are literally sitting in the kitchen with your family having a country breakfast. First up the orange and coffee test which is where all brunches will live or die. Coffee was excellent and the juice was about a 7.5. As good as it gets when you see it coming out of a carton even though it had only been squeezed about an hour earlier. To get a 10 in the OJ test you need to squeeze it on the spot and have amazing oranges, a great glass and have it served to me by a Victoria's Secret model. None of those are easy to deliver on during a busy breakfast service in central Dublin but it will happen one day. 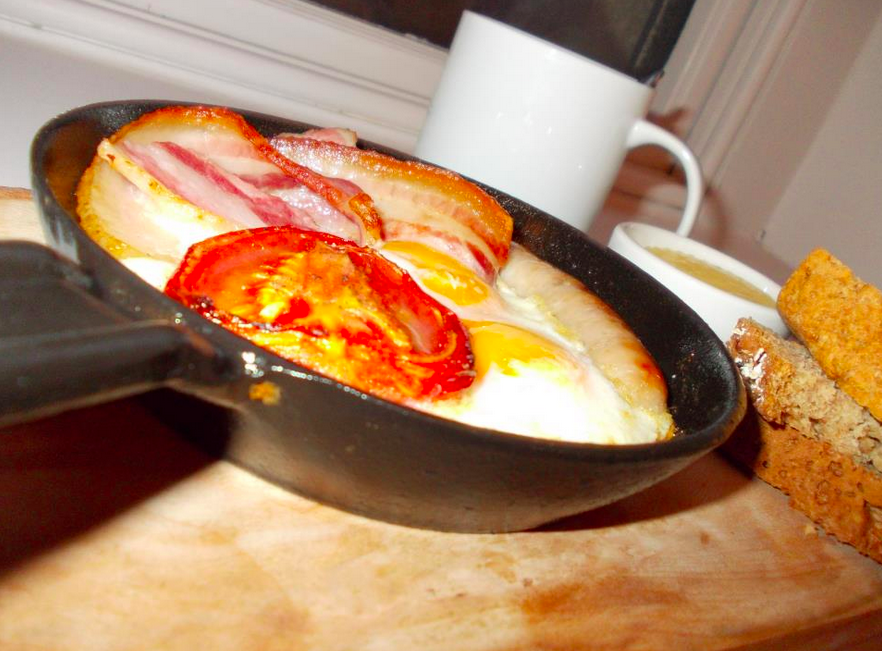 I went for the baked eggs with bacon, sausage and egg in a pan. The picture above is the version the restaurant share on their Facebook and the one below is the one I took. Not that much of a difference but this wasn't a good dish. Eggs, bacon and tomato were all perfect but the sausages were bland and tasteless. What made it not work for me was the way it was served. Lovely idea and very practical for the kitchen to have prepped in advance but it was a complete mess to eat. The pan was too small with stuff spilling and sliding out of it all over the place and then I even thought about taking them onto the chopping board it came with but it was all to much to figure out on a Saturday morning. I felt like a toddler with a spoon learning how to eat again. 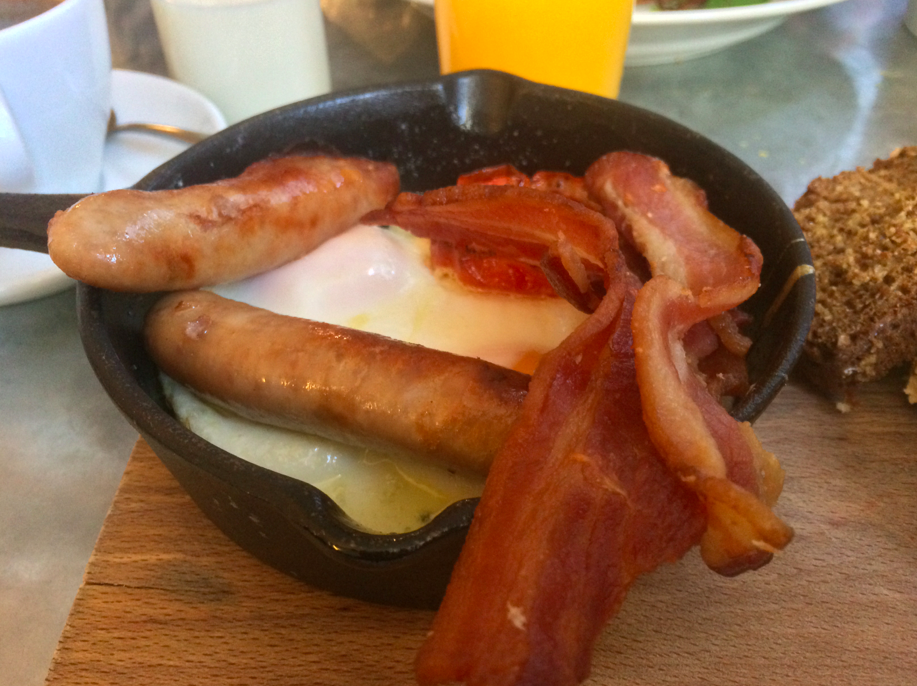 Even though it was 11 in the morning my dining partner went for the fishcakes. If the fry up was a "meh" these were off the charts good. Light and flaky stuffed full of fresh awesome fish and super crispy on the outside. The salad was perfect and there was so much succulentness (clearly not a real word) going on that the lemon and mayo were "nice to haves" but not even necessary. I had a serious case of brunch envy.

The whole thing was about 25 Euros and a delight. Good service. Lovely light room despite it being a basement but the biggest selling point is only being 100 yards from Grafton Street. I would say it's more of a get in and out quick sort of brunch rather than lingering over the culture section of the Sunday Times for hours because with such a small place the staff were keen to keep the tables turning. Another good brunch to add to the list and I'll be doing my bit to kick January to touch by eating out more than in any other month. Fuck it's only food after all it'll hardly kill you. I am only one person eating there on one night so in a bid to give the review a little balance here are some other bloggers and reviewers who have eaten there as well...
Cheap eats
French Foodie
Cook's Belly
A little bird love 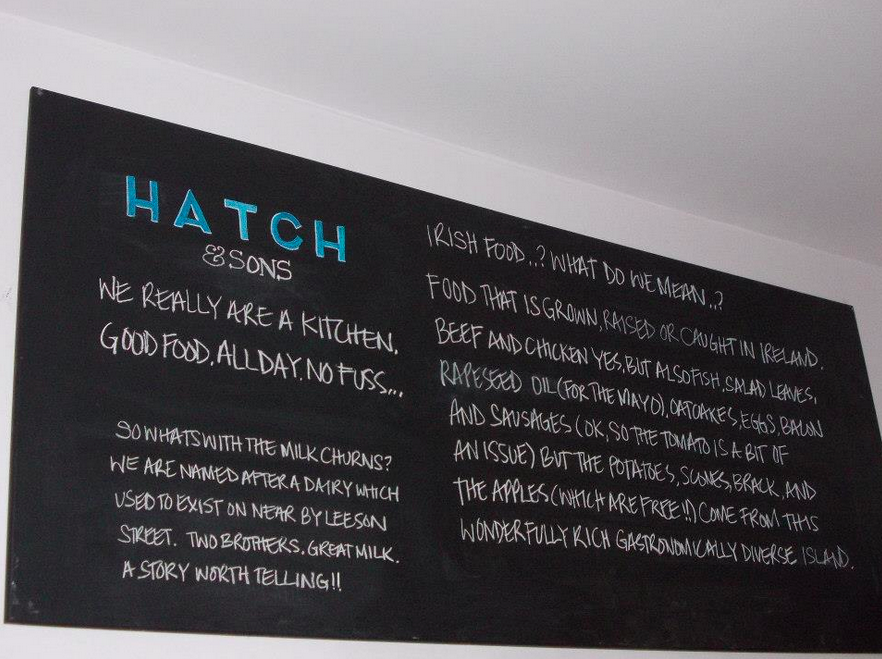