Everybody loves Pizza. I don't know anybody who doesn't. So when I heard that the people behind Crackbird Dublin had opened a new pizza only restaurant called Skinflint I knew that I had to give it a bash for the first ever review here on the site. It's located in the original CrackBird premises down in Temple Bar and it is every bit as hip. Tables are made out of old doors, there is kitchen paper on the tables and bags of ingredients are piled high all around you.
The venue's name is obviously about cashing in on the recession buzz and although the place is brilliantly designed you can tell it was done on a budget. Just like in Crackbird the menu is simple enough with 7 or 8 pizzas and a daily meatball selection. I went for a pizza with pink peppercorns, chorizo and pecorino and ordered a glass of fresh orange juice. The orange juice was the first thing that annoyed me because it wasn't fresh. You could tell it had been squeezed earlier in the day and sat in a carton for hours. It was decent but I obsess around good fresh orange juice and this wasn't it. 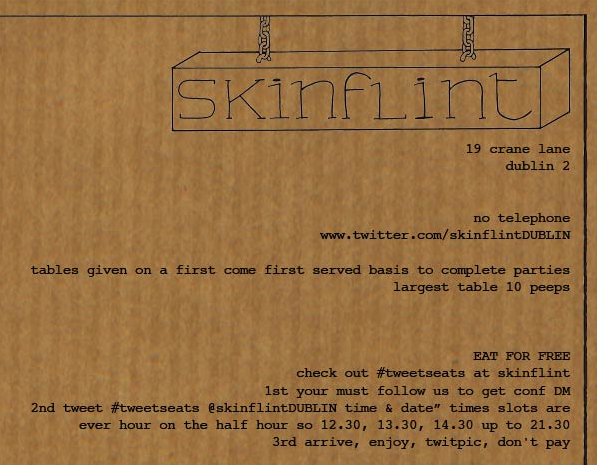 The pizza arrived with plenty of ceremony. It's a long rectangle shape and the waiting staff cut it with a knife that if you were carrying around Temple Bar would get locked up for a couple of years. The pizza is grilled and super thin and they make a big deal of not using Tipo 00 flour (traditional Italian pizza flour) and instead focusing on Irish ingredients. I didn't like it. The topping was OK and the sauce was above average but I don't want to see another grilled pizza ever again. I never understand why people insist on taking on classics and try to reinvent them. Pizza is one of the most loved and widely appreciated types of food and the reason it has been around for hundreds of years is because it is simple and it works. Nothing you can do to it will make it better. Absolutely nothing. In Crackbird and Jo Burger the other 2 restaurants operated by the owners they took jaded food items (Burgers and Chicken) added a bunch of tasty original stuff, threw in some funky design and found a winning formula. They've tried to do the same thing here and the pizza falls flat on it's face. It looks great at the start and tastes decent but by the time you finish it it's a soggy doughy mess and I actually left half of mine. The only thing that could have made it worse was if somebody offered me honey to pour on top of it and that is exactly what Skinflint want you to do with their own chili flavored honey. Honey on a pizza? No thanks.

The place has some early buzz about it (thanks to their usual smart marketing) and I'm sure it will be busy for weeks to come. I love everything about it apart from the food which is a big problem when you are a restaurant. It's called Skinflint but at 15 Euros for a slice of poor pizza and a glass of juice it's the venue that will be laughing because it's not as if they are wasting all the money on decor or a proper pizza oven (expensive). I've just come back from Rome where a pizza and a drink costs well under a tenner and that is for the real deal. Something doesn't add up with the pricing and I left feeling like I had actually been conned.

I really wanted the place to be good because I love their 2 other concepts and so do the general public. Skinflint will be full of hipsters and it will get plenty of coverage but sometimes the best things in life are best left as they are and I fear they've picked the wrong food to tinker with. You'll probably want to check it out once for the buzz and to see something different but if I had €15 to spend I'd be going to get real pizza up at Credo. They use real flour there imported from Italy, stick to winning toppings that have been around for years and you get a huge slice and a drink for €4.50 a pop.

A new gourmet burger spot has just opened in Dublin

Dr. Ronan Glynn is not too positive about Dublin restrictions being lifted in the coming weeks

This Dublin Café Serves Up A Seriously Good Nutella Pizza