This blog is known for it's bad language so when you put me in a restaurant called Bang the amount of titles I could choose was endless. If you've not heard of Bang with friends then check it out to find out how the youth of today are using technology instead of more traditional courting techniques like going out on a date or having a dance. Technology eh. Anyway on to Bang the restaurant where I was lucky enough to be taken to dinner by a couple of great friends. In a twist or irony one friend features in the current series of Dragon's Den while the restaurant itself has been taken over by Bobby Kerr who previously occupied one of the Dragon's seats. Bang has been on the Dublin restaurant scene for over a decade but after running in to trouble during the boom Kerr swooped in like a hungry vulture to save it and breath a new lease of life into the business. Luckily he had no plans to start serving shit coffee and expensive plastic sandwiches and stuck the original Bang format.. Being a shrewd businessesman he picked up a restaurant that is within 3 minutes walk of hotels like The Shelbourne, The Fitzwillian, The Merrion, The Conrad and The Westbury. Thats a hell of a lot of big fat Americans and Olli Rehns' needing traditional Irish food in a luxurious setting and explains why there was a 7 course "Gathering" tasting menu available. What I did love is the little note giving credit to the suppliers. Food takes months or years to grow and the ingredients are only on the plate for a few minutes so only right that the people at the start of the chain get a little credit. 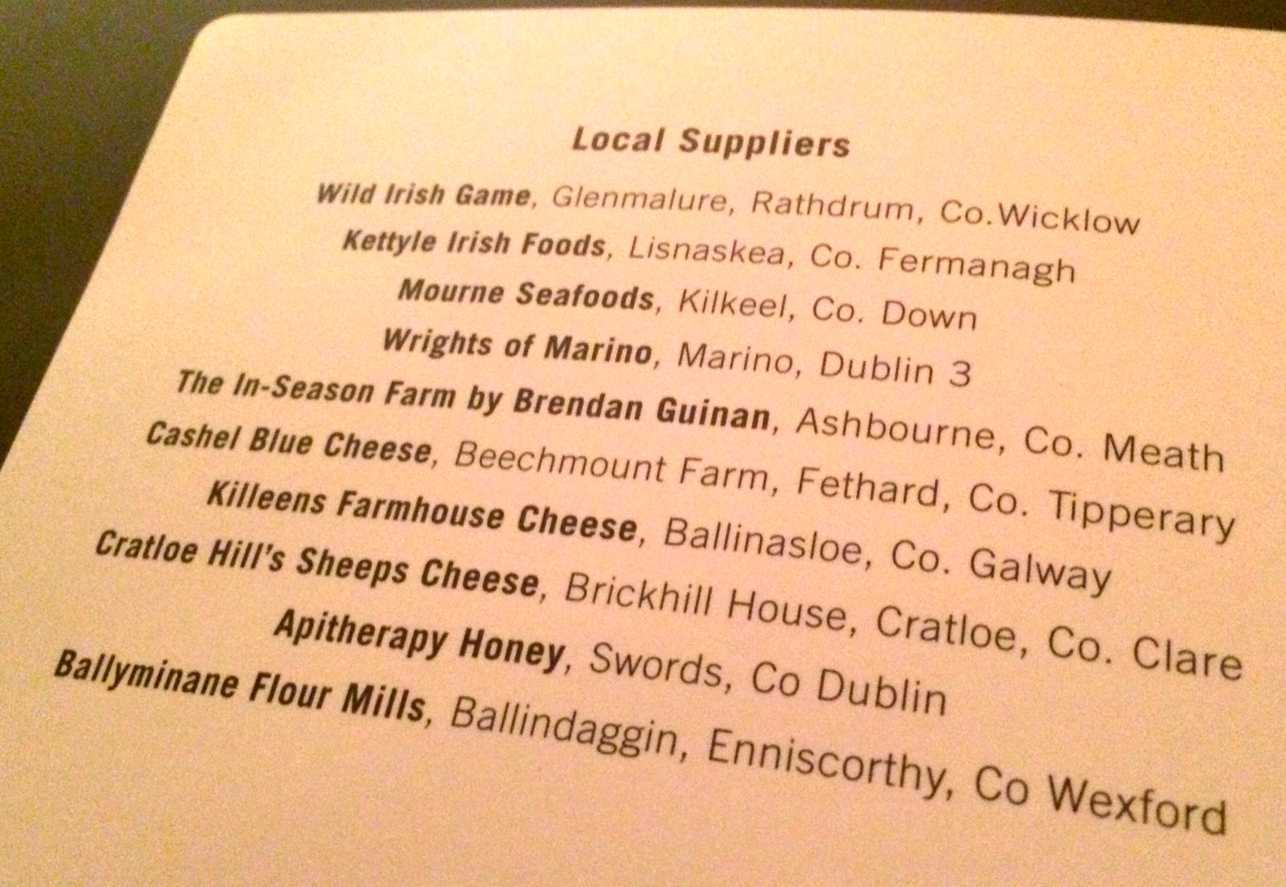 We had crab lasagne to start which I thought was a pretty average. Probably something to do with the big load of foam sauce over the top of it. Please stop doing that chefs! It was in fashion in about 1998 and it wasn't even enjoyable then. A little piece of sharp shell at the end of my starter was another downside but having spent years in kitchens carrying out the job of picking shells out of crab meat I'm always on the look out. The fat yanks at the table next to us might not have been so lucky and could have ended up with sliced gums for their troubles but that would have saved me from hearing about their breakfast plans for the next morning in great detail. 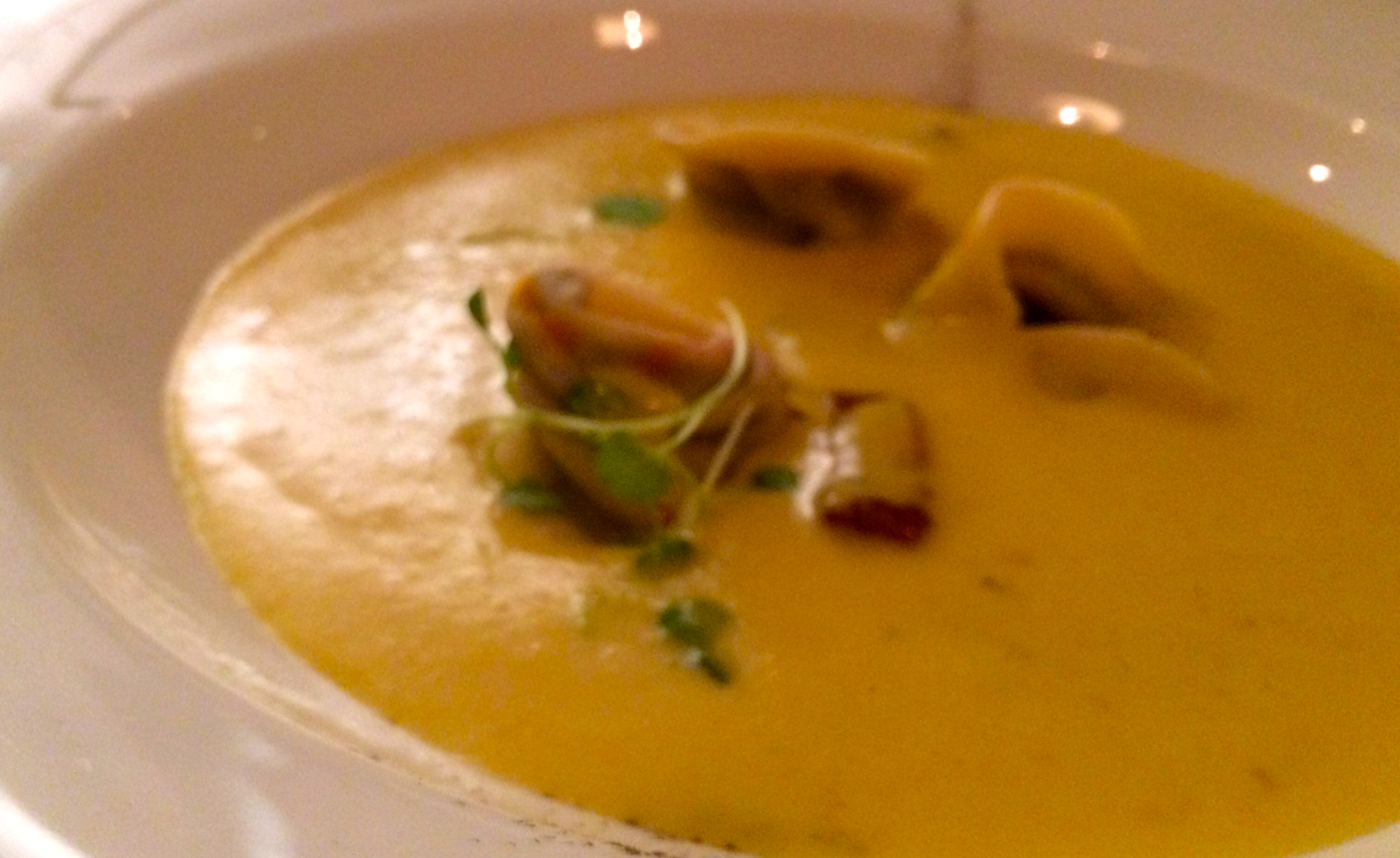 The corn soup was decent with some lardons and ravioli in there but we were all expecting that watered down shite you get in chinese restaurants with so much MSG in it you could stand a spoon up straight but which is actually delicious. Nice starters but nothing earth shattering. 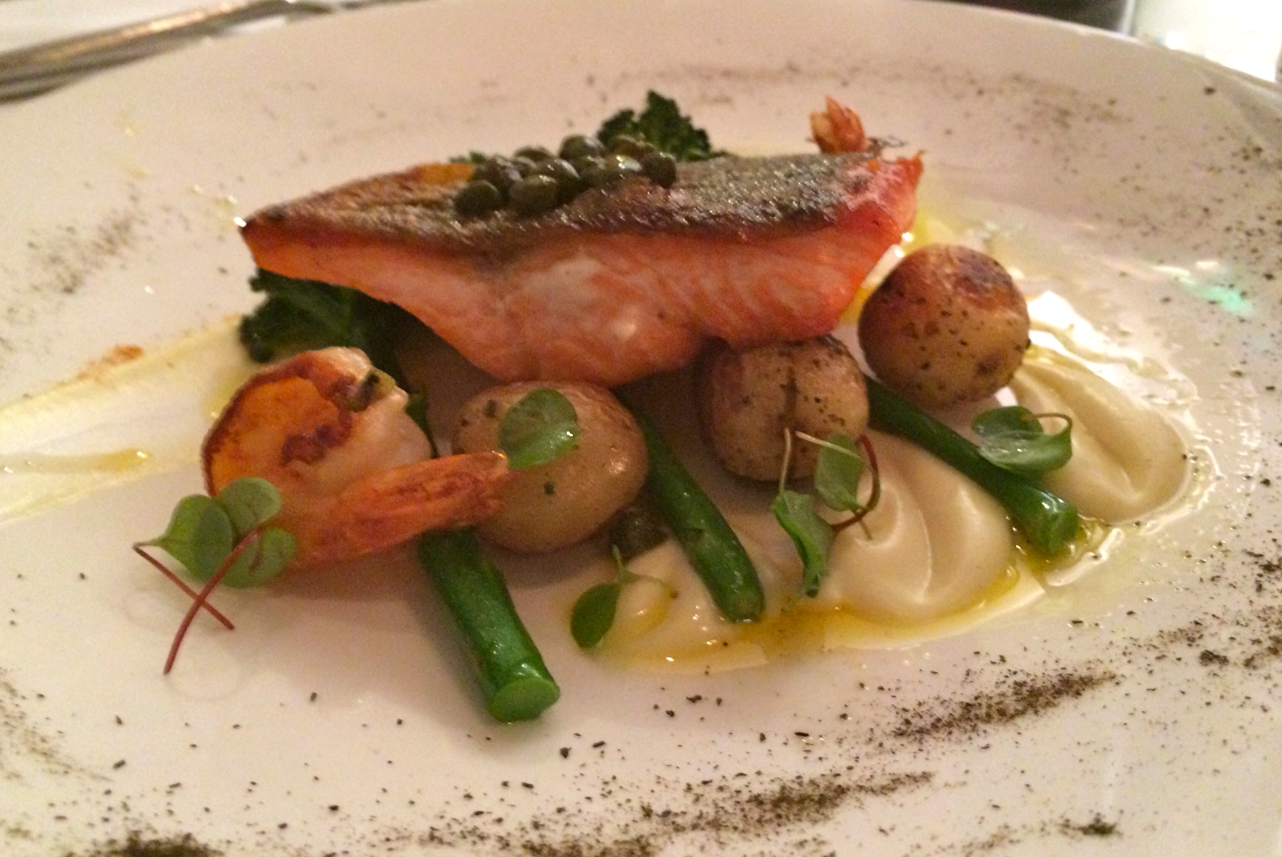 The mains were all delicious with lovely cooked fish, chicken and veg all served up with side orders that were outstandingly cooked and perfectly seasoned. What stands out most in Bang is the beautiful presentation. You could easily hang any of the plates up in the national gallery and leave it there for a decade and it would still look timeless. Every ingredient is delicately placed on the plates by the hand of an artist but in a way which doesn't interfere with the eating experience. 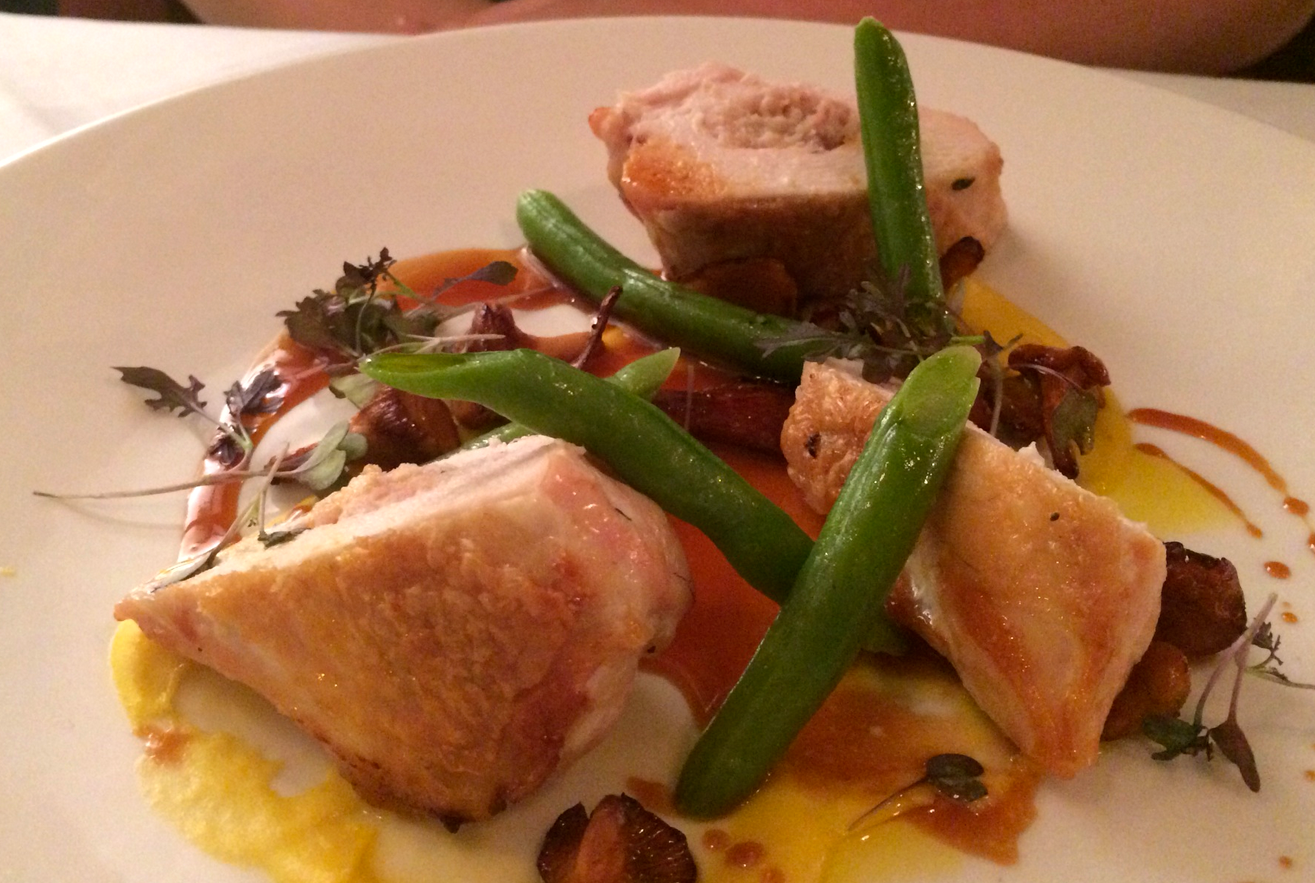 We weren't in a full on food coma at the end of the meal and the first 2 courses left us wanting more. That is what good restaurants should do. The mains are about 25 to 30 quid each and not exactly huge so don't expect a cheap night out here. My guess is that under their new owners the profit margins have increased significantly. 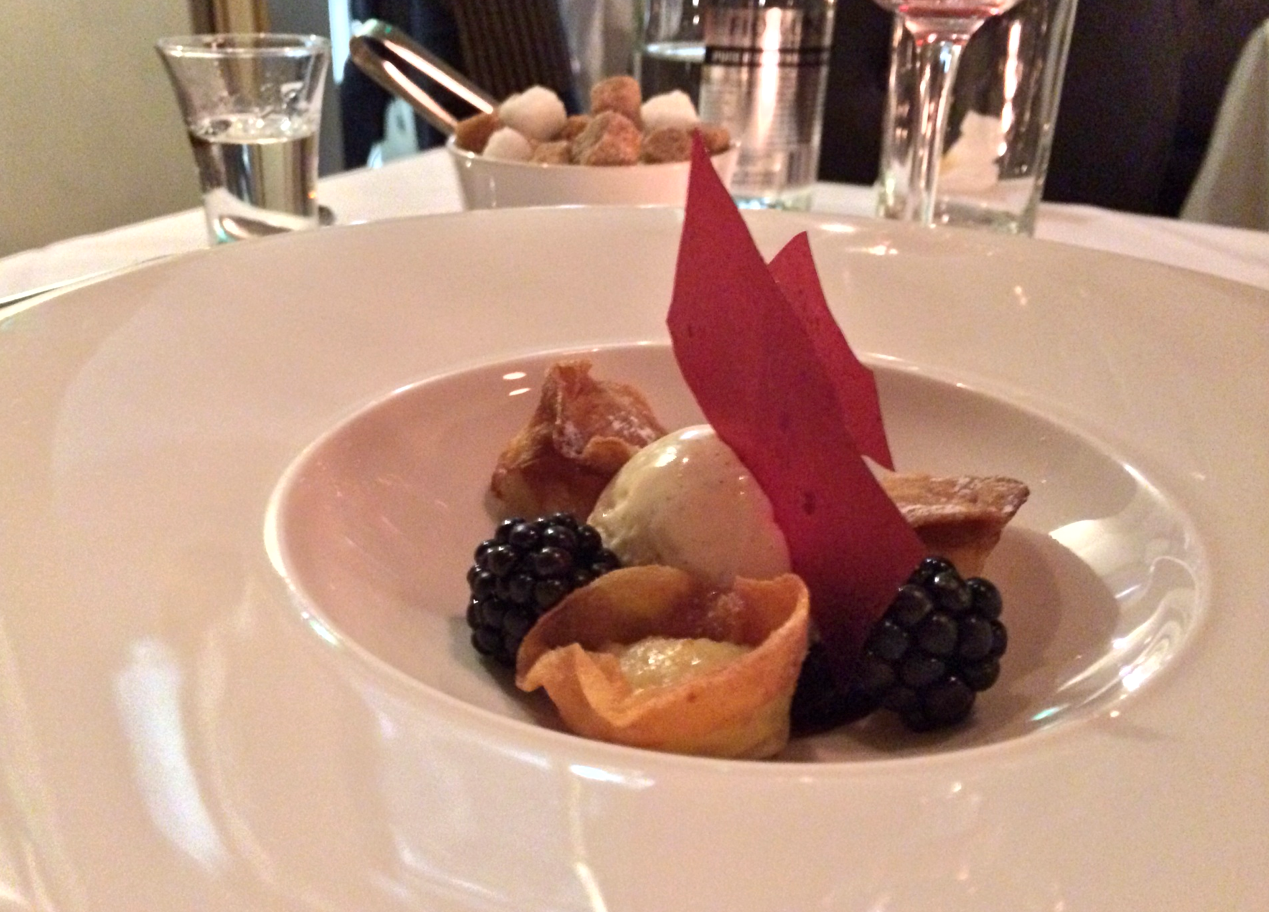 The desserts were a mixture of outstanding (the chocolate cake), decent (apple yokes) and absolutely rotten (my little almond biscuits). It really did leave a bad memory of what was otherwise an outstanding meal but not enough to stop me from coming back. This is a special treat of a restaurant that will hit the pocket pretty hard. I'd go here for a big celebration or even better for a cheaper lunch but if you are on a budget I'd leave it to the hotel guests and tourists. They are cooking great looking food with plenty of flavor and I'm delighted to see it stay in businesses because this is a restaurant that we are all better off having in our town. Well run, great service and elegant cooking. I am only one person eating here on one day so in a bid to give the review some balance here are some other reviews from journalists and bloggers who also reviewed Bang...
French Foodie
Stitch and bear
The purple Page

Other Photos From Bang

The light was kinda shitty in the restaurant on the night I was eating there which is never good for taking photos so I decided to share some of the food photos that Bang themselves share on their Facebook and Twitter pages. I don't know about you but I love flicking through food photos that a restaurant share because it gives a much better feel than any words ever could of the food and their style. You can see here for example that Bang place a huge emphasis on the presentation with colors being key to their style of cooking. 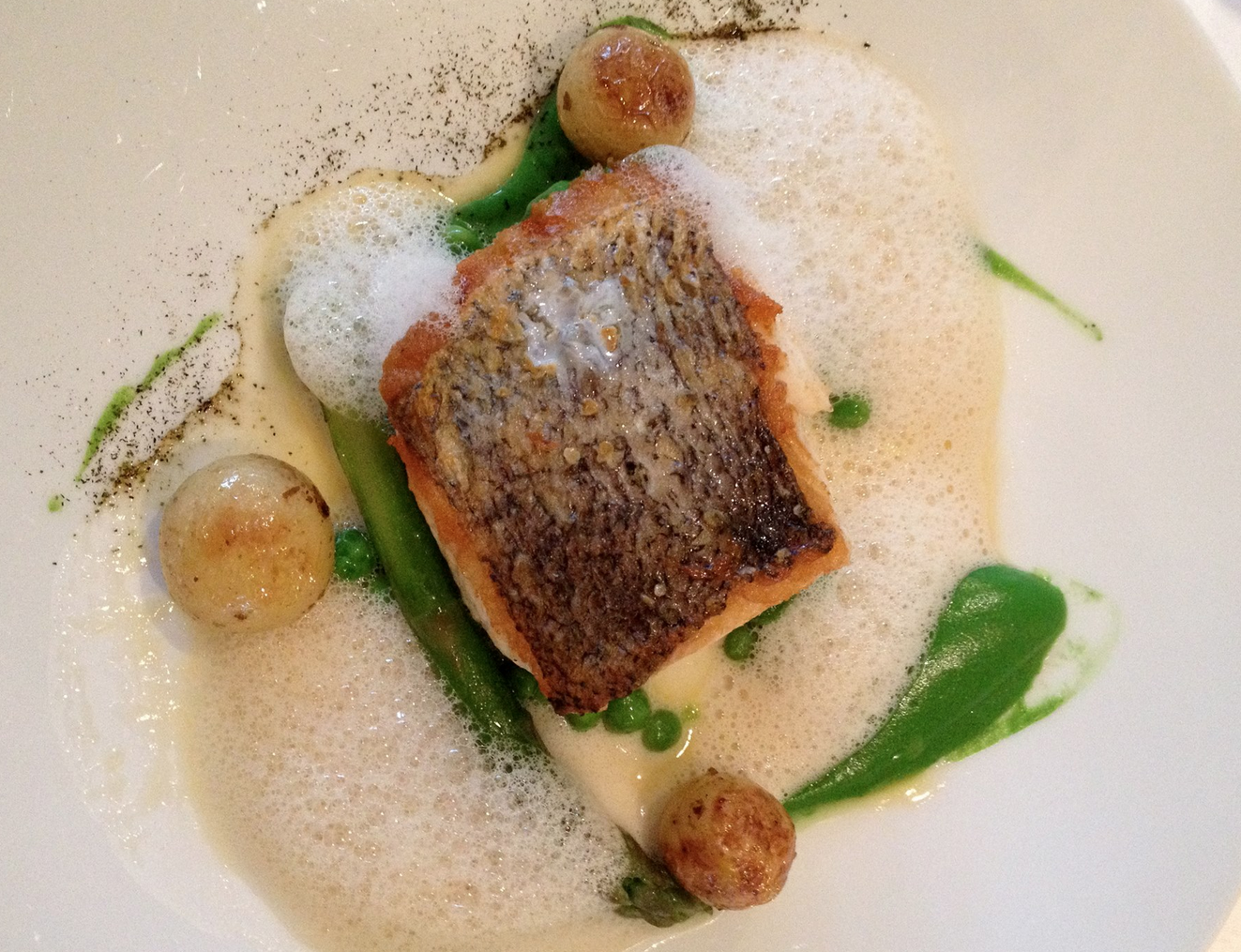 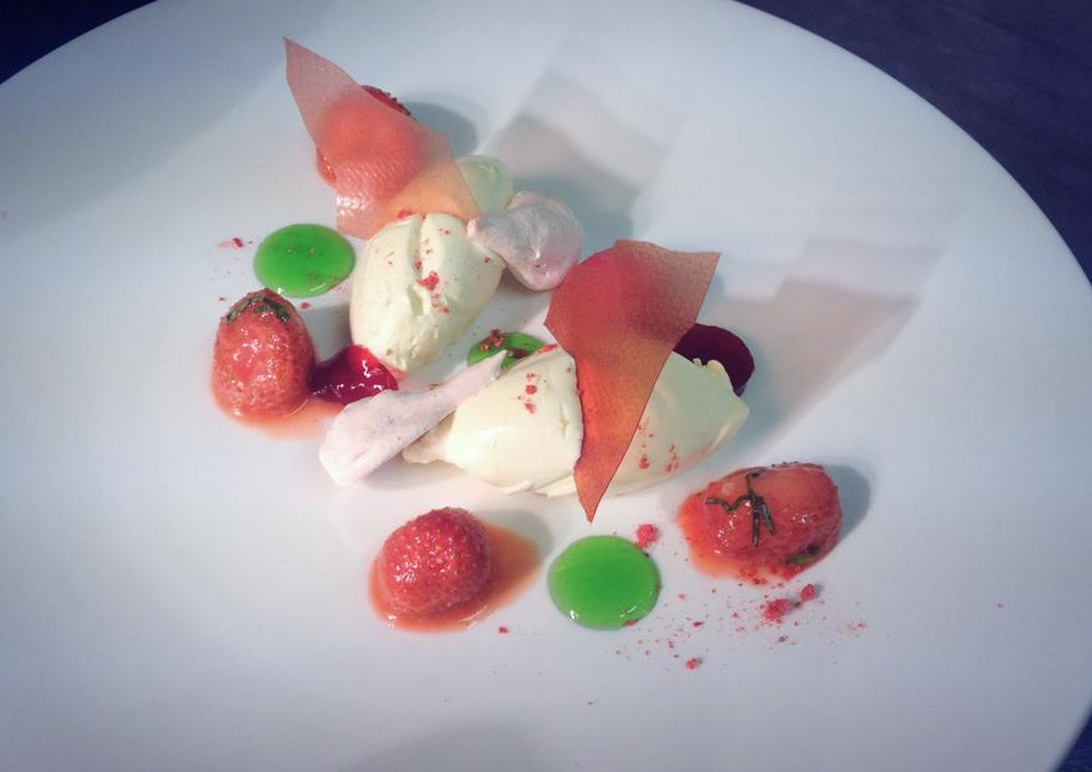 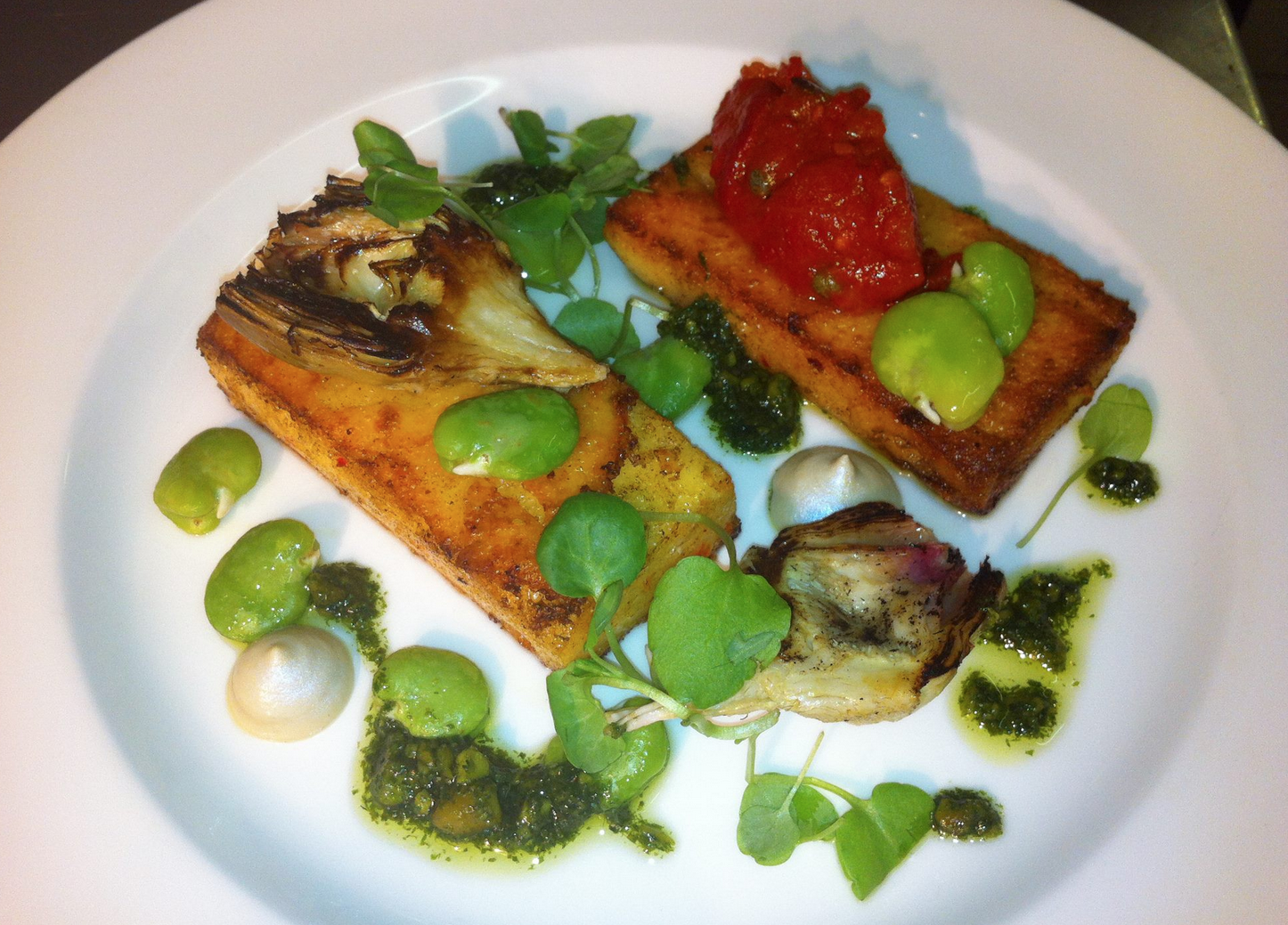 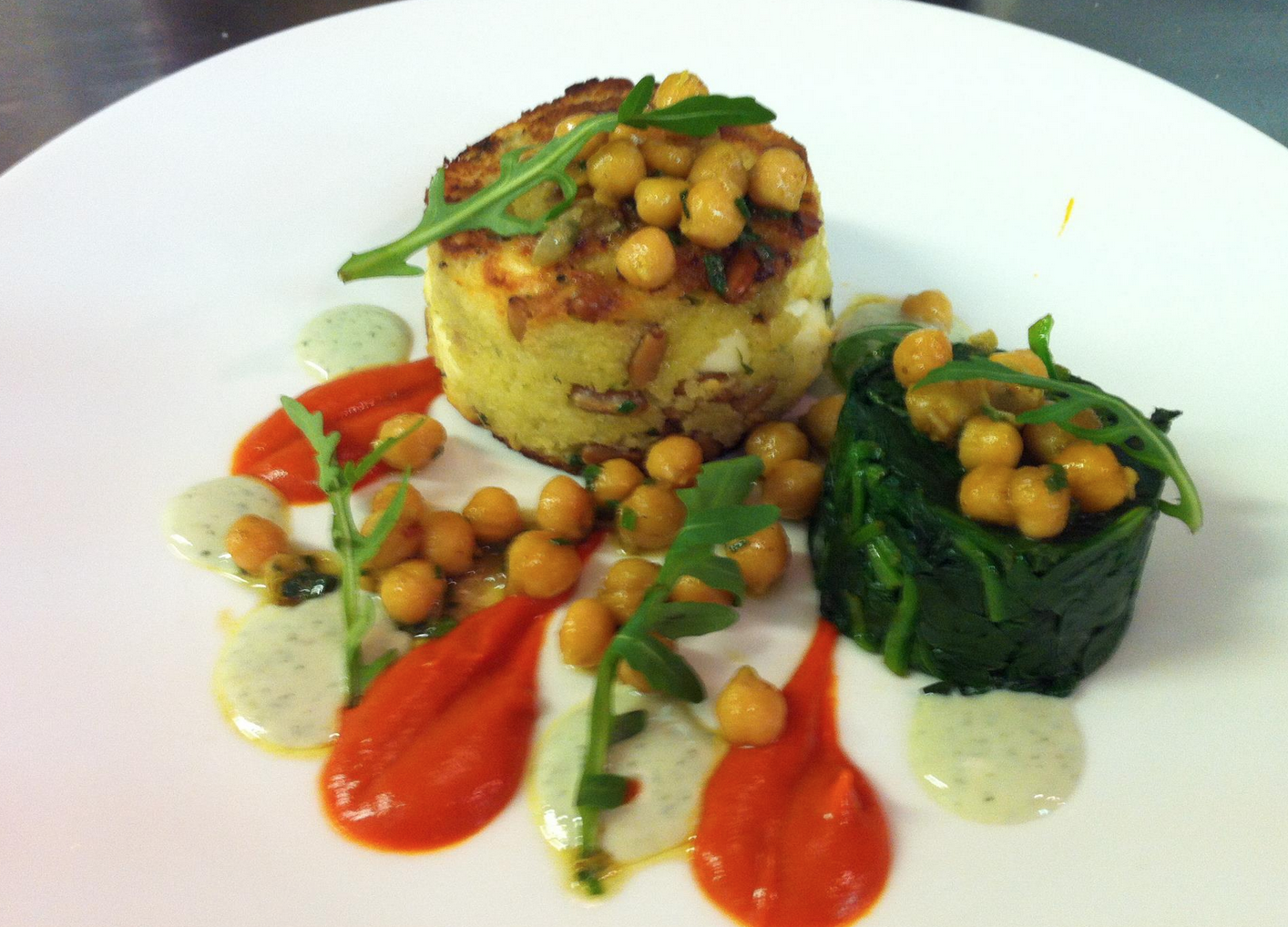