Prado was full of promise.

We arrived on a Tuesday night to a packed dining room in Clontarf’s newest haunt. Formerly the beloved Moloughney’s, the space is barely recognisable with a smart, very attractive fit out.

Tables to the front look out on the bustle of Clontarf’s hub, Vernon Avenue. A bar presides over the centre section, while the dining space to the back of the large, high-ceilinged space is dominated by the kitchen pass, beyond which flames dance on the grill.

The grill is the main point of Prado, sister restaurant to Dublin 4’s Asador on Haddington Road. Good quality Irish meat and seafood flame-cooked for charred and juicy succulence is the remit at Asador and now Prado. There’s a certain bombast inherently attendant to barbecue and Asador in Haddington Road always felt somehow macho, maybe it’s the proximity to RugbyLand or the occasionally corporate vibe among the clientele. Prado in contrast is firmly the smart-but-relaxed neighbourhood joint we all wish was on our street – or at least it appears that way from first glance. The interiors exude warmth with copper fittings and light fixtures reflecting the flames that dance in the kitchen beyond.

The starter is a promising first gambit from the kitchen. We share the Iberico Sobrasada which comes with a salad of charred apricots and bread. The sobrasada feels a bit like a cousin of nduja. It is a cured spiced sausage with a loose composition meaning we can scoop it onto our toasts and mop up its oily unctuous juices. The charred fruit provides an elegant foil for the salty sausage and we both settle in for what will presumably be a good meal.

Alas, the mains disabused us of this hopeful outlook. The Prado menu offers individual mains or a choice of larger cuts to share – think an ember-roasted leg of Wicklow lamb served with chimichurri or a thick-cut bone-in rib-eye for two. A separate section offers four steaks for between €24 and €34. Among the mains there’s a burger, a fish of the day and half a chicken.

There isn’t a whole lot of imagination on the menu but esoteric dishes aren’t the order of the day here. Prado is clearly endeavouring to do the “simple but perfectly executed” thing but there’s just one issue, our mains are marred by several culinary clangers.

We order the rib-eye which comes with a choice of sauces and fries. We want the peppercorn sauce and the béarnaise which, I assure the waiter, I am happy to pay for. Still, when the mains arrive we have to ask again for the béarnaise and when he returns, it is with – no joke – a thimble’s worth of béarnaise.

I may have been able to cope better with Sauce-Gate except the hard-won sauces are not good. The béarnaise (what little I got) has no discernable flavour of tarragon while the pepper sauce is inedible. It’s hard to tell how it made it to service, it tasted like someone had had an unfortunate spill with the ground pepper and instead of accepting that the sauce was a write-off and belonged in the bin, decided to try and style it out. 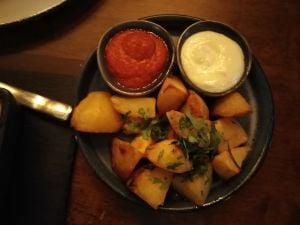 My companion’s glass of pinot noir doesn’t arrive and he pleads a further two times before it appears in the middle of the main course. The long-awaited glass of wine was not comped at the end of the meal.

I opt to road-test the vegetarian offer: baked escalivada – a dish of charred aubergine, peppers, red onions and St Tola goat’s cheese. It’s fine, I wasn’t moved to eat more than a few bites and I really think given the current mood regarding eating vegetarian and vegan, Prado would do well to bring a bit more enthusiasm to rounding out the meat-free options. The baked escalivada comes with boiled potatoes and when I ask to substitute chips instead, I’m told it’s not possible. Oh-kaaaaaay.

I am allowed get the rocket and manchego side salad instead which, it transpires, is the most successful element of the meal. An order of duck fat patatas bravas, meanwhile, are only grand.

After we finish our mains, the plates languish in front of us for at least 10 minutes, which given how things have gone thus far, is enough to get us muttering cattily under our breath. I am usually strict on not bad-mouthing a meal that is still in progress, but the plates in front of us tell a damning story. We didn’t even finish the chips that came with the rib-eye – if that’s not an indicator then I don’t know what is.

We order the churros with a selection of Valhrona chocolate sauces and at this point, I am actually rooting for Prado. “Please be good,” I silently pray. This meal needs some kind of redemption. The churros arouse suspicion from the first bite. My companion is convinced that they are pre-cooked and heated up to order which is a crime against the majestic deep-fried churro, but even if he is being overly critical, there is, incredibly, another Sauce-Gate brewing. This time it’s one of the chocolate dipping sauces – it’s undeniably burnt. 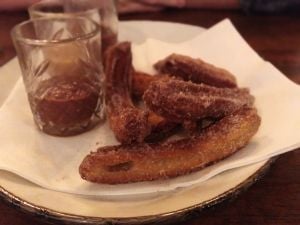 It’s pretty shoddy. In my cheffing days, god knows I wasn’t perfect but every sauce gets tasted and you don’t serve something that doesn’t taste good. It’s food 101, guys.

It’s hard to find a positive note to end on with a meal that was plagued by goofs. Hopefully, Prado is still finding its feet and will ultimately become a nice addition to the roster of restaurants in Clontarf.

This review is one person’s opinion, on one night. Disagree? Let us know below. Fancy trying it for yourself? Book here.

A cool new coffee van is opening up on the Northside

Last weekend to get your hands on this insane Christmas Toastie

This Dublin spot is doing a Cheeseburger Toastie special this weekend