You could argue that pubs are the beating heart of our great city. They’re the places where special moments happen and meaningful connections are made, and we love them for that.

Here at Lovin Dublin, we love to discover hidden gems and new places for you to try out. But sometimes, it's nice to celebrate some of our already-beloved bars and restaurants and remember why they have become the institutions that they are today.

We’ve teamed up with Smirnoff Infusions to give you a fresh look at your city by taking a look at some of our favourite venues in Dublin.

This time, we’re celebrating The Stags Head, one of the city’s oldest watering holes.

Nowadays, The Stags Head is a cosy spot to escape the cold during winter, and a fantastic place to enjoy the good weather during summer.

On a sunny day, you’re sure to see crowds of Dubs outside the beloved venue soaking up the rays.

But how has it changed over the years? Most people who eat and drink here are probably oblivious to the fairly rich history behind the place.

The Stags Head has been in business since 1895 and was designed by architect A.J McLoughlin. Fun fact: it was actually frequented by iconic figures such as James Joyce. But, it was an integral part of Dublin life long before that.

A tavern has existed here since the 1780s but it gained fame in the 1830s as ‘John Bull’s Albion Hotel and Tavern', which was one of the most sought after properties in the city due to its proximity to Dublin's Theatres and the high-end stores on Dame Street and College Green.

An ad in the Irish Daily Independent in 1895 described it as "the most extensive and luxuriously fitted bar in the city". 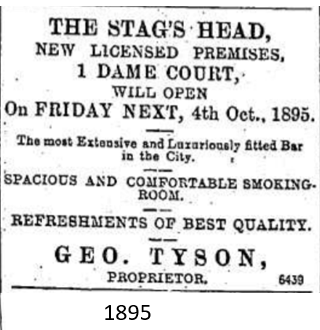 Although you can now catch some fab comedy gigs and music sessions in the pub, you probably didn't know that the venue used to be a music hall. 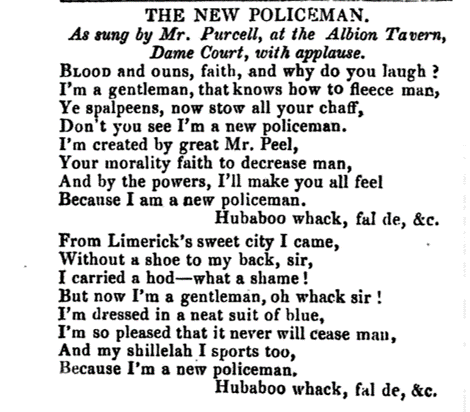 It was one of the first pubs in Dublin to have electric light.

According to an old newspaper clipping, the pub was "one of the first hostelries in Dublin to have electric light, which, like all of the iron-work here, was installed by the famous old firm of McGloughlin's of Pearse Street".

The beautiful premises looks pretty much the same as it did when it first began serving Dubliners in 1895, complete with its red brick exterior, bottle glass windows and a scrolled doorway. The clock outside even still has the initials George Tyson, who opened the bar in 1895.

And of course, there is still the stuffed stags head above the bar.

Return to Stag’s Head (this will be a recurring location!!)

Whether you're here all the time or you only pop in every so often, you can't deny that this pub is anything less than iconic at this stage, and the city probably wouldn't be the same without it.

And The Stags Head is just one of the venues around the city that will be serving up Smirnoff Infusions, the brand new refreshingly fruity spirit drink from Smirnoff.

Sponsored By
Smirnoff Infusions is the brand new refreshingly fruit infused spirit drink from Smirnoff. Try it in selected bars and stores around the country. Visit drinkaware.ie
Visit our website
Share: