We can never have enough festivals, can we?

Well, if you think so, tough luck as another has just been announced.

Mother have teamed up with MCD to create Love Sensation which will be held in Royal Hospital Kimainham, August 17 and 18.

Not only did the announce that this new music and arts festival is coming, but they also released the line-up all in one go.

Some of the bigger names include Lily Allen, Clean Bandit, Mother DJs, Daithí and Soulé. 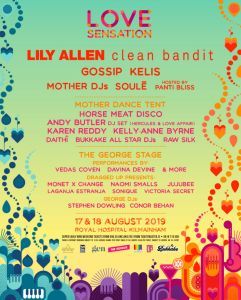 Although, there will be more added to that line-up in the coming weeks.