A bar on Baggot Street has issued a no-nonsense response to a negative review which suggested that a bartender deceived a customer into ordering the "most expensive whiskey."

Searsons management has completely rejected some of the statements in the TripAdvisor review, which was posted last week.

The one-star review was based on one customer's complaint that a bartender supposedly recommended two extremely expensive whiskeys after a meal without making the customer aware of the price.

The disgruntled customer claims that the bartender did not reveal the cost of the whiskeys until the time came to pay and that the price was not clearly displayed. 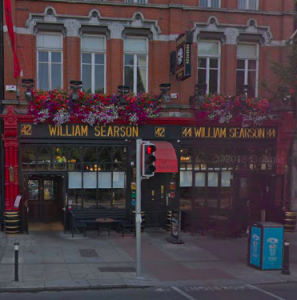 The response from Searsons management was thorough, to say the least.

The Searsons reply reads: "Thank you for your phone call yesterday. You were indeed speaking with managers on both occasions. As we clarified for you over the phone, you requested to sample a 'fine whiskey.' The bartender who was serving you made a suggestion, pointed out the vintage, rarity and how valuable each whiskey was. He pointed out that these whiskeys were 'middle shelf whiskeys' but 'worth every penny'. After leaving the final decision up to yourself, you then said to the barman, 'give me the gold, I want the gold'. After sampling one whiskey, you asked the barman for another suggestion as you were with a friend and 'wanted to drink him under the table'. The two whiskeys you purchased were a green spot 12yr old & Teeling 26yr old, which are not two of the most expensive whiskeys as you have stated.

"After sampling both of these whiskeys and settling the bill, you thanked the barman for an 'amazing experience' saying that the two whiskeys were 'worth every penny'. You mentioned that the service you received was 'amazing' and said to the barman, 'keep doing what you are doing, you will go far in life'. The next evening management (s)poke with you on the phone, explained all of the above, and resolved this situation for you.

"It may also be added that you were sitting at our whiskey bar where we have the prices of the whiskeys labelled on every bottle. On both occasions, prices were pointed out to you and the final decision was left to yourself. On both occasions, you opted for 'give me the gold'.

"We thank you for joining us in Searsons, I hope we have been able to further clarify this matter for you."