Camden Street has long been one of Dublin's premier drinking hubs but there's always room for more option if you frequent this part of town.

Jimmy Rabbitte's opened back in 2017 and has been growing in popularity ever since. One of the main pulls of the place is the beer garden out the back which Dubliners of a certain vintage will recognise as the old Palace smoking area. 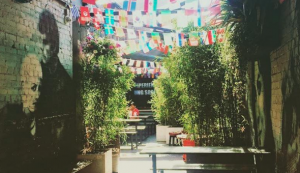 The seating arrangement is mostly made up of tables with a long bench on either side, ideal for a group of six to eight people who want to shoot the breeze for a few hours after work or over the weekend.

While summer is prime beer garden season, Rabbittee's will have you covered during the winter too. Back in early February, when the weather was still freezing, I stayed out late here to watch the 2019 Super Bowl with some friends. With the heaters on full blast well into the early hours, you wouldn't have known what time of year it was at all. Our winter gear was dispensed with and we were left to focus on the giant screen overhead without worrying about shivering knees or chattering teeth. 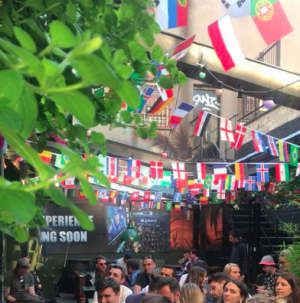 The aforementioned screen is a big factor in Rabbittee's growing reputation as a great place to watch sport. They'll always show the main events such as Six Nations rugby and all the big GAA games out in the beer garden and its close proximity to some of Dublin's other favourite nightspots make it the perfect location to get celebrations underway. Soccer, boxing and loads more will be catered for as well and if what you're looking for isn't on the telly, a member staff should be happy enough to flick it on for you.

Patrons who aren't bothered going all the way inside to order a pint can avail of a hatch that leads into the bar, making ordering a drink as effortless as possible.

The beer garden has plenty of artwork adorning the walls which you can admire in between having a few goes on the games machines against the wall. A couple of portaloos give the place a festival feel but if you don't feel like slumming it, there are more traditional toilets in the main bar. 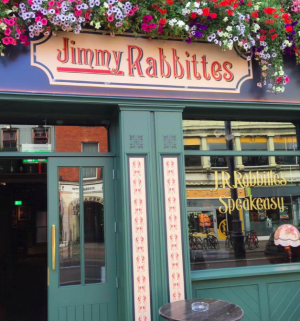 With the weekend upon us, Jimmy Rabbittee's should definitely be near the top of your list for an outdoor pint over the next couple of days.

READ NEXT: Beer Garden Guide – This Harold’s Cross Spot Is Ideal For Basking On A Summer’s Day