This Saturday, Ireland will go toe-to-toe with Japan in the Rugby World Cup and if you weren't already excited, these new limited edition beers from Guinness will surely seal the deal.

The people at St.James’s Gate have been busy coming up with Japanese-inspired range which includes Ginger And Wasabi Stout, Yuzu Amber Ale and the non-alcoholic Stout Of The Rising Sun. What better way to toast the World Cup hosts with the most? 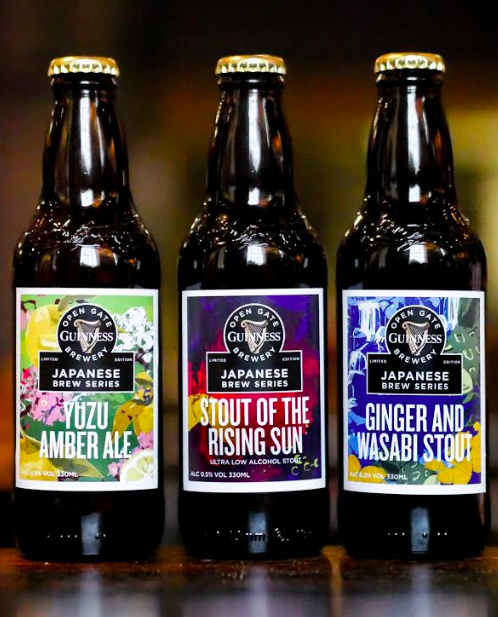 The creations are aimed at rallying belief in the Irish rugby team ahead of the big game on Saturday and you could find yourself sampling the brews at St. James Gate itself simply by getting involved in the Belief Rally on social media. All you have to do is use the hashtag #IrelandBelieves and Guinness will select 100 lucky winners to come and enjoy the limited edition Japanese-inspired beer of their choice at St. James Gate.

So which one would you go for? The following descriptions should help:

'At 6.2% ABV, the Ginger and Wasabi brew is a robust grand slam of a stout, flavoured with mild ginger spice to create a complex beer, flavoured with light roast and dark chocolate.'

'Yuzu Amber Ale, with an ABV of 4.8%, is a Japanese inspired evolution of a classic Irish red recipe, in which the malty base of an Irish red ale is melded with the bright and juicy yuzu fruit, dryhopped with new world hops.'

'Stout of the Rising Sun, at 0.5% ABV and less than 100 calories, is a truly great tasting non- alcoholic stout. The complex roast malt base gives depth of flavour to support the intriguing notes of hojicha, a charcoal roasted green tea from Japan.'

Speaking about the creations, Peter Simpson, lead brewer at Guinness Open Gate Brewery said: "These three special beers, are our latest innovation where experimentation with Japanese inspired tasting notes and an evolution of classic Irish recipes has created a unique celebration and union of our culture and craft.”

All we need is a bit of belief and we should be toasting another Irish victory on Saturday. Be sure to get your phones out and get involved.

What restaurants are open in Dublin? The definitive live list