You can't beat a mulled wine in town over Christmas and this year it looks like O'Shea's Of Talbot Street is the place to get one.

The lively traditional pub and restaurant is offering its customers a complimentary mulled wine and mince pie every Friday throughout December, which is just what you need to rest your weary legs after a festive shopping spree.

Just imagine sitting down in front of this roaring fire after a hard week's work and filling your belly with a delicious complimentary treat and a mulled wine to wash it down... We're feeling cosier already. The offer is open every Friday in December from 5pm until 6pm and with two blazing fireplaces, O'Shea's Of Talbot Street will be the perfect stop-off if you're around town.

If you can't make it on a Friday, a mulled wine and a mince pie will be available every other day of the week for €7 and if you're with a gang of mates, you might as well try one of these gin trees pictured below while you're there. The trees cost €49 for six gins and €69 for nine gins and they can be enjoyed in a new heated rooftop garden at O'Shea's Of Talbot Street.

If that wasn't enough, the pub is also holding a 12 days of Christmas with freebies on offer every day, details of which can be found in the below pic... 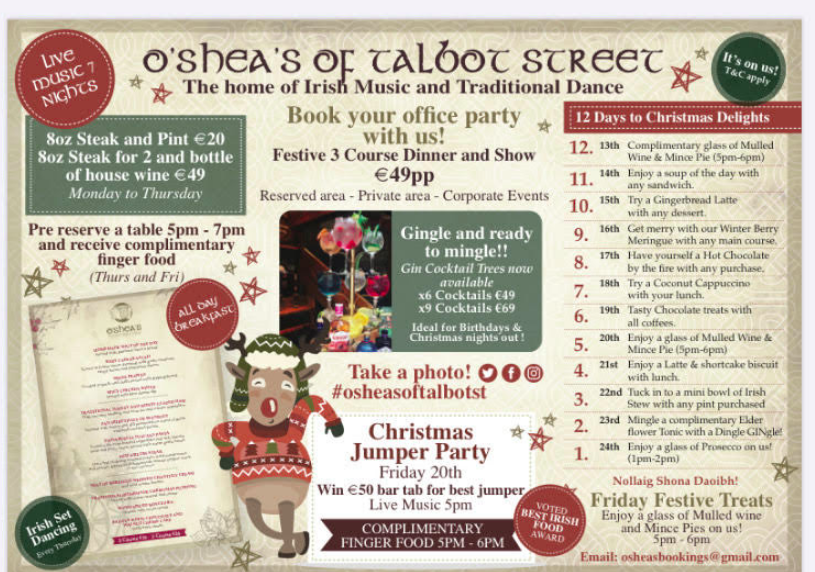 There are also three new entertainment shows including the Irish Dance Party (3pm - 5pm on Saturdays and every day from January), Dancing At The Crossroads (seven days a week up until the end of February) and An Evening Of Fairies And Folklore (five nights a week from January until the end of February and seven nights a week from March until November).

All of the shows are now available for corporate and group bookings.

Plenty of reasons to visit then. More information about O'Shea's Of Talbot Street's festive deals can be found here.

READ NEXT: 'Being clean is not a luxury' - Old handbags are needed to help Dublin's homeless this winter

This Dublin restaurant is doing a nacho happy hour