The annual Salesforce and Tiglin sleep-out took place last night and while the rain failed to dampen spirits, it may have had an effect on proceeds.

This is the fifth year that the two organisations have held the event in aid of men and women affected by homelessness, drug and alcohol addiction on the streets of Dublin. Salesforce is an American software company based in Sandyford while Tiglin is an addiction rehabilitation charity which provides rehab facilities for those struggling with addiction.

Last night, the team set up camp for a sleep-out outside the Gaiety Theatre around 3pm and saw it through until 5am this morning. Around 50 Salesforce employees took part throughout the night and while there is always a positive public reaction, Colette Mason of Salesforce told Lovin Dublin that the weather this year may have had a detrimental effect on donations.

"It was lashing rain and a lot of people weren't stopping. City centre footfall was lower than in recent years," she said before adding that "the target this year was €15,000 and as with every other year, Salesforce has vowed to match every cent and donate it to the cause."

Even though the rain poured down, spirits were still high as Salesforce employees took turns to bang out a few tunes, including the likes of Coldplay...

And naturally enough, Oasis got an airing as well...

While budding musicians are all well and good, some extra star power was added by former Ireland soccer international Niall Quinn who happened to be passing as the sleep-out was taking place. Colette explains that "we spotted him going past and we called him over. He was good fun and was happy to pose for pictures."

Yep, the tall lad in the back of the below photo is none other than Niall Quinn... 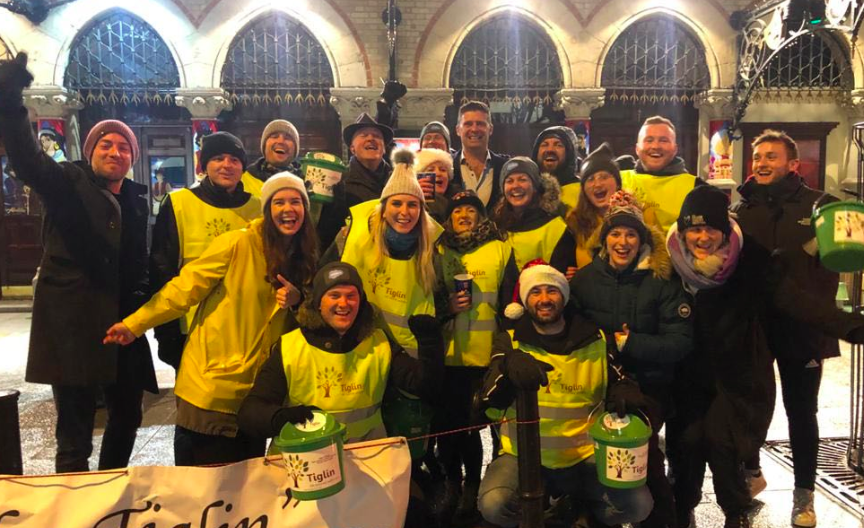 Coincidentally, Niall has history with Tiglin and even opened up the astroturf football pitch at the Tiglin Rehab Centre in Wicklow back in 2013.

So far, the sleep-out has raised over €5,000 but it's expected that Thursday's weather will have had an effect on Salesforce and Tiglin reaching their €15,000 goal. It's an admirable endeavour and if you feel like helping out you can make a donation via this link.

Remember, as Colette said, every donation will be matched by Salesforce. A wonderful effort by everyone involved. Tiglin was founded by Aubrey McCarthy and you can find out more about their work here.

A huge homeware exhibition is coming to Dublin in March