A flight from London Heathrow to Philadelphia was forced to land at Dublin Airport on Monday afternoon after an incident involving a spilled chemical solution.

American Airlines flight 729 diverted to Dublin and landed at around 1.15pm, shortly after multiple crew members reported feeling unwell following a spillage of a cleaning solution in the galley of the aircraft.

The plane took off from Heathrow and had passed the southwest coast of Ireland when the decision was made to turn around and divert to Dublin so that those affected by the odour from the spilled chemical could receive medical attention.

One passenger on board the plane, Katie, took to Twitter to say: "Ok, so this hasn’t quite gone to plan. Chemical spillage has led to sickness outbreak and an emergency landing in Dublin." 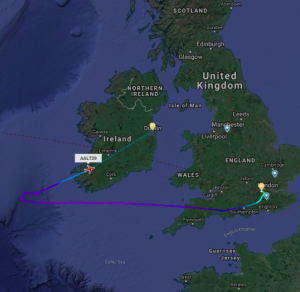 Two American Airlines employees, as well as one customer, were taken to hospital for further evaluation.

A statement from the airline to Lovin Dublin reads: "American Airlines flight 729 from London Heathrow to Philadelphia diverted to Dublin due to an odour caused by a spilled cleaning solution in the galley.

"The flight landed safely in Dublin at 1:15 p.m. local time, and taxied to the gate.

"Medical personnel have met the aircraft to evaluate any crew members or passengers who may need additional assistance.

"Two crew members and one customer were taken to the hospital for evaluation."

We’re hosting a fab online event for parents, here’s how you can join the fun

Register For Our 'Mum Talks From Home' Event