Word has travelled incredibly fast since Gursha first popped up in North Strand earlier this month.

The Ethiopian supper club is the first of its kind in Dublin and it’s clear that the city was crying out for something just like this. Serving up traditional Ethiopian cuisine in the homey surrounds of Cloud Café, it’s been a huge hit with customers so far – and it’s already booked up until the end of November.

After writing about its arrival last month, I got to try it out for myself over the weekend and it definitely didn’t disappoint. The dishes are made for sharing, making it perfect for a date or a group of mates since you can try out a few different things together.

This is the whole ethos of Gursha, too – the word means ‘mouthful’, which can also describe the act of feeding someone else at the table as a sign of friendship and love.

The pop-up was created by Mel Roddy, who is from Ethiopia and grew up in Bayside with his two sisters, Susie and Elsa. He decided he wanted to bring authentic Ethiopian food to Dublin after his most recent visit to Ethiopia last October, and also seeing it on offer in different cities around Europe.

When I arrive at Coud Café on Saturday evening as part of a group of eight, the place is buzzing and owner Mel is on hand to explain the menu and suggest dishes.

The menu is kept simple, with a total of seven dishes to choose from – three meat and four vegan. We decide to go for a sharing platter between twos and with ours, we go for a mix of the doro wat – chicken stew simmered in berbere sauce and onions; and the yebeg tibs; melt in the mouth lamb strips marinated with garlic, cherry tomatoes and peppers, which are both unbelievable. 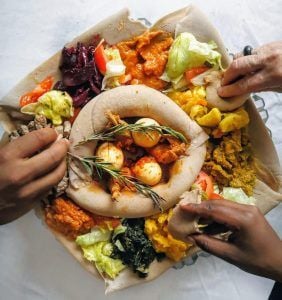 You can mix as many or as few as you like or choose your own dish if you’d prefer not to share.

A selection of vegan dishes on our platter also include gomen; Ethiopian-style greens with fresh herbs and garlic, and ater kik alicha; a split pea stew mixed with garlic and onion and coated in turmeric, and there's plenty of flavour here for anyone who'd rather have an entirely meat-free platter. 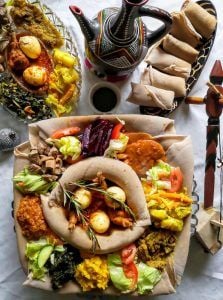 A gluten-free sourdough flatbread called injera is used instead of a knife and fork to scoop up your food which is even better than it sounds – it’s got the soft texture of a pancake and is perfectly spongy without the usual bloat you’d get from eating a (very) generous amount of bread.

The sharing platter was followed up by a chocolate fudge brownie with ice cream, served with traditional Ethiopian coffee – all of which I’ve been dreaming about ever since.

There are currently only five dates still available in late November and early December, so you’ll want to get booking ASAP if you’re hoping to try it out this side of Christmas.

Gursha is at Cloud Café every Friday and Saturday from 7pm until December, after which Mel is hoping to open his own place. Tickets are €25 each which includes all dishes and you can book via Gursha’s Eventsmart page here.