It's been over a year since Conor McGregor took his last trip to the Octagon.

The UFC superstar has been more focused on promoting his new whiskey over the past 12 months than he has been with fighting but that looks like changing soon as McGregor has seemingly decided on his next fight.

McGregor has told UFC president Dana White to get a bout with fellow former UFC lightweight champion, Frankie Edgar, over the line.

The Dubliner has also revealed that he plans to donate his entire fight purse, which ought to be worth millions, to charity.

Edgar, like McGregor, is coming off a defeat in a title fight and the American would be a popular opponent choice among fans. 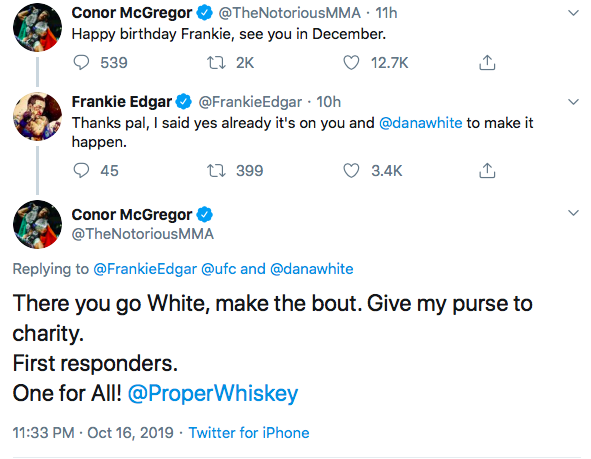 'The Notorious' is in desperate need of a victory if he is to make another run at a world championship, having not won a fight in over three years.

After wishing 'The Answer' a happy birthday, McGregor told Edgar that he would see him in December, which makes a previous cryptic social media post about December 14 a little bit clearer.

Back in September, McGregor hinted at a homecoming fight on December 14 although it's unlikely that the UFC would stage McGregor vs. Edgar in Dublin as it would cause some logistical headaches regarding pay-per-views.