The Liberties is one of my favourite areas in Dublin - it's full to the brim with culture, quirky antique shops, street art and deadly spots for grub.

It's really managed to keep its old-school "dirty old town" vibe but it also has this contemporary edginess to it.

As of late, there have been some pretty amazing places opening up in Dublin 8. I had one of the best meals in Variety Jones and today I was in awe of a brand new café that has opened its doors.

Bombolinis are an Italian-style donut topped and filled with various different sauces and flavours.

The café itself is pretty cosy but it's connected to its sister restaurant proof pizza so if there's over-crowding in either venue there's still plenty of seats available.

The interior is an Instagrammers dream - a mix of stunning pink floral patterned wallpaper, a pink scalloped booth below a pink neon sign.

It's all pinks and whites, crisp and clean. Facing the bustling Thomas Street, it's the ideal Caribbean-style retreat to nurse a toasty hot choccy and watch the world go by.

If my description hasn't convinced you, I'm sure these pictures will: 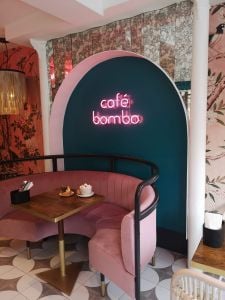 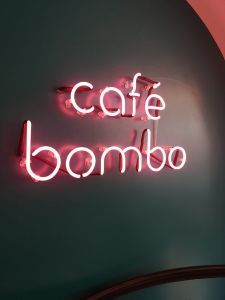 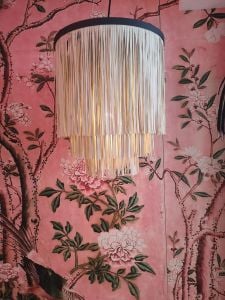 What's on the menu?

Got a sweet tooth? Well, you're going to be in a heavenly food coma while you're here.

The menu boasts a range of filled donuts, sundaes, decadent hot chocolate and patisserie. It's like being inside a real-life dolls house; all the dishes come out in dainty mismatched crockery, flowers, polka-dots, birds, the works.

For research purposes, of course, I ordered three dishes off the menu: A smores bombolini, a white hot chocolate and bombolini bites.

The first was by far my favourite. A super soft sugary donut with a gooey marshmallow on top stuffed with oozing chocolatey sauce. It was so fresh and the flavours were divine.

The hot chocolate was white chocolate flavoured with berries, meringue and cream. For me, the flavour was lost among the milk and mountain of cream on top. I'm not the biggest fan of canister cream, I find it a little tacky and it often melts into the mug creating an unappealing mess of thick goopy froth spilling over the mug and a pool of liquid gathering in the saucer below. This is exactly what happened with this one too. It would have been much better with just the froth from the hot chocolate itself and more flavour from the berries - this one in particular needs work on its flavour and presentation. 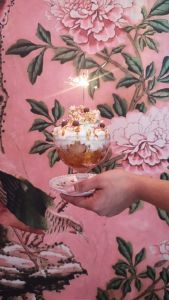 Finally, I had a bombolini bite which consisted of mini donuts, (again) a mountain of canister cream and various toppings. Still not a fan of the cream sitch, but maybe that's a subjective criticism. I would have opted for a small scoop of ice cream. The dish was sprinkled in hundreds-and-thousands which I personally am not a fan of in any sense, aesthetically I think they're a little gaudy - if you're going to do them keep the sprinkle to a serious minimum and they could maybe look cute.

As well as this there was popcorn, chocolate balls and caramel sauce. It looked like something you'd give your niece or nephew on their 8th birthday party. I have to admit however, the other dishes I have seen on their Instagram are following the less is more buzz and they look so much better.

Even still, my one did look a lot cuter than I expected but I will say, I think the wallpaper helped out a lot.

So yeah, a few teething problems but I am sure that within a week or two they will have a much better idea of how exactly their dishes should look - they have literally just opened so it's to be expected.

At the end of the day, the bombolinis are proper delish so that's what really matters. 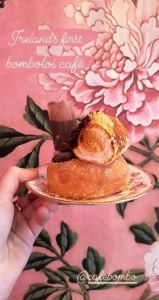 If you're in the mood for a shneaky scoop, this place has cocktails on tap.

Yes, I repeat - cocktails on tap.

They have all the faves, espresso martinis, Aperol spritz, G&T and old fashions.

I predict this place will be rammed with groups of Insta-huns getting their martinis and posing against the stun walls. I mean, I totally don't blame them, sure I did it myself and I'll deffo be going back with the mohs again.

PUBLIC SERVICE ANNOUNCEMENT: Did you know you can get Espresso Martinis ON TAP in @proofpizza a brand new pizza joint in The Liberties 🍸 We'll have 10 pls!

Such a cute spot.

I predict big things from Café Bombo and I'm really excited to walk past it in a few weeks and see it absolutely rammed, it deserves to be.

After all, bombolinis are delish and it's an Instagrammers dream - it's a win-win situation.

Our top viewed videos from February

An unreal new ramen restaurant has just opened up in Dublin