Lewis Capaldi is currently in Dublin to perform two shows at the 3 Arena and thanks to Copper Face Jacks, fans won't have to call it an early night tonight.

The Harcourt Street hotspot is offering people with Lewis Capaldi tickets free entry before midnight tonight after the second of the Scottish singer's two shows at the 3 Arena. 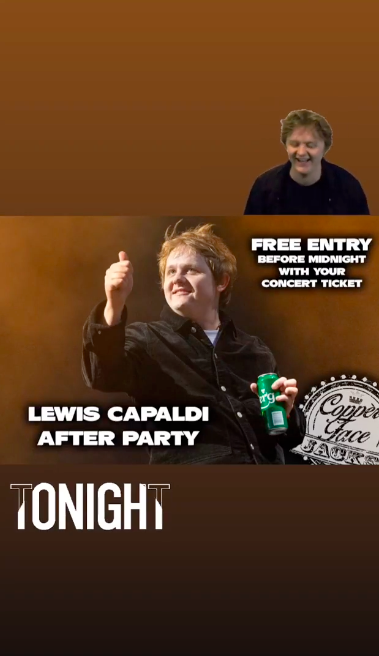 Capaldi's show at the Docklands venue last night was well-received and tonight is sure to be no different. The Scottish singer is due on stage at 9pm, after performances by Donna Missal (7pm) and Alec Benjamin (8pm).

It's no surprise that Coppers have put the aforementioned offer on given that Capaldi has previously stated that he's the proud owner of a much-coveted Coppers gold card. It remains to be seen if he ventures that direction himself tonight but after performing two sold-out shows, he'll certainly have earned a pint or two.

Sure why not call in Before You Go, Lewis?

READ NEXT: Six Handy Places To Eat Before A Gig At The 3 Arena