Maybe now you'll be able to get a seat for yourself on that morning commute.

The addition of 41 new rail carriages to Dublin trains has been approved by the Government in a bid to combat capacity issues.

The Minister for Transport, Tourism and Sport, Shane Ross T.D., announced on Wednesday the approval of the proposed purchase of 41 additional rail carriages across the Greater Dublin Area rail network.

It is hoped the new carriages will alleviate capacity issues for commuters and provide an additional 34 per cent increased capacity during the AM peak time.

"This project is hugely significant and will deliver real benefits to rail commuters in the Greater Dublin Area," Minister Ross said. 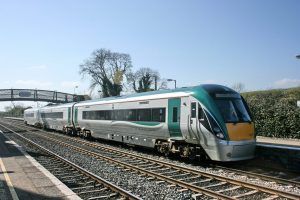 "In terms of rail, this Government is making major investments, including the National Train Control Centre, the improved programme of network maintenance and renewal and of course the DART Expansion Programme. We want more and more people to make the switch to sustainable mobility and to do that we need projects like this to expand the network and make it more attractive to use."

It is hoped that the additional carriages, which will cost approximately €150 million, will enter service in the Greater Dublin Area by 2021.

The Minister for Transport and Sport @Shane_RossTD announced Government approval for the proposed purchase of 41 rail carriages to increase capacity across the Greater Dublin Area rail network. Project #Ireland2040 pic.twitter.com/W10YXXnKaO

The expansion of the GDA commuter rail fleet will increase capacity across the Kildare Line, Maynooth Line and Northern Line.

"Today’s decision by the Government to give the green light to the purchase of 41 intercity railcars is to be welcomed," commented Anne Graham, CEO of the National Transport Authority.

"Public transport in Ireland is a success story, with the numbers of Iarnród Éireann passengers increasing every year since 2013. However, this has led to capacity becoming a real issue, particularly on commuter services.  While it will take two years before any of these carriages enter service, customers will be reassured by the very fact that they are on the way."