One Dublin pub received a surprising message this week.

Like Alan Partridge before us, sometimes the urge to take what's not ours on a night out proves powerful. The hapless radio DJ once famously succumbed to an impulse to steal a traffic cone and put it on his head and a similar situation has now taken place in real life, only with bar stools instead of traffic cones.

The Black Wolf pub on Main Street in Blanchardstown has shared a pretty funny story which involves the theft of two stools, an apparent moral epiphany and a resulting change of heart.

We'll let the venue take up the story, as per its Facebook page:

'People do silly things when they are drunk...
Take a look at these pictures.
2 Stools magically reappeared thanks to this lovely customer who was clearly over come with guilt & maybe more they didn’t go with the kitchen.
I’m sure the Cctv of it is funny but we ll let you all imagine the 2 lads bailing out with a stool in hand running down the road thinking they have pulled off the crime of the century!!
Thank you for your apologies.
Hope to see you soon.
2 Private Function rooms available complete with all stools.' 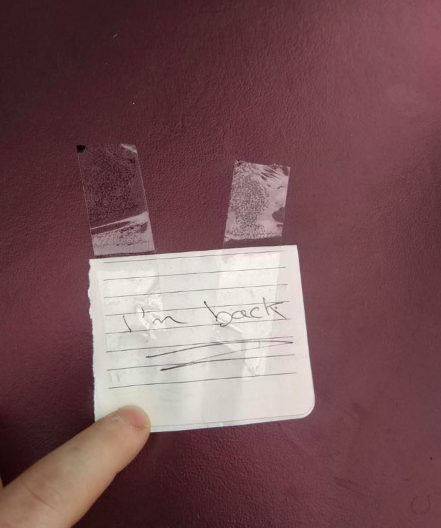 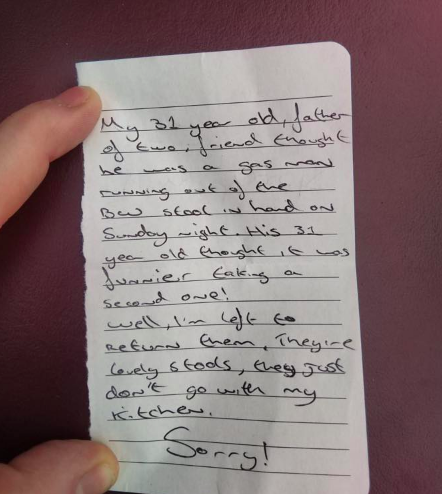 If you can't make it out, the letter says "my 31-year-old father of two friend thought he was a gas man running out with bar stool in hand on Sunday night. This 31-year-old thought it was funnier taking a second one! Well, I'm left to return them. They're lovely stools, they just don't go with my. Sorry!'

All's well that ends well, wha? The next time you take a notion after a few bevvies, hopefully you'll see the error of your ways too.

READ NEXT: You can find Leinster’s best pub roast in Dublin 9