A flight from Barcelona to Dublin Airport was delayed on Monday afternoon due to some drama regarding a passenger with a fake passport.

A man is believed to have made his way on board Vueling flight number VY8720 from Barcelona to Dublin Airport with a falsified passport and managed to lock himself in the plane's bathroom.

As Civil Guard officers entered the aircraft to deal with the incident, passengers were asked to leave the plane and were moved to a different aircraft. 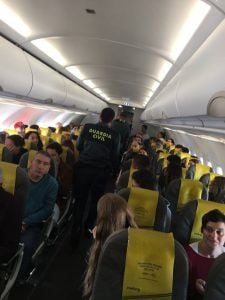 The flight landed at Dublin Airport on Monday afternoon shortly after 5pm.

A statement from a Vueling spokesperson issued to Lovin Dublin reads: "During the boarding process of flight BCN-DUB VY8720 in Barcelona, gate agents identified a passenger trying to board this flight with a false passport. Whilst waiting for the arrival of the authorities, this person managed to run towards the aircraft toilet and lock himself therein.

"Vueling disembarked all passengers safely and proceeded to change aircraft so our customers were able to continue their journey to their destination. There was no impact on passengers and cabin crew and the local authorities were in full charge of the situation."