U.S. singer Lizzo may have performed in front of an adoring crowd on Sunday but she came across one individual she probably didn't expect to during her stay in Dublin.

As we reported on Sunday, the Truth Hurts singer had a bit of a tour around Malahide Castle over the weekend as she passed the time ahead of her Olympia Theatre gig. However, what was expected to be a fairly uneventful day out turned into a spooky experience for the star.

Speaking to Tracy Clifford on 2FM, Lizzo said that she came across the ghost of court jester Puck, who is said to have spent the last few centuries roaming around the castle. It turns out Puck was up to no good, as Lizzo explained: "He took my phone and he put it in my dancer’s pocket, it was so crazy. They looked all over the castle for it. Then we called it and it was in my dancer’s pocket outside. She was like, ‘How did it get in here?’ It happened after I knocked on his door."

To be fair, he was probably checking if Lizzo had a spare ticket to Sunday's show. According to one person working at Malahide Castle, Lizzo expressed her concerns befor leaving the site... 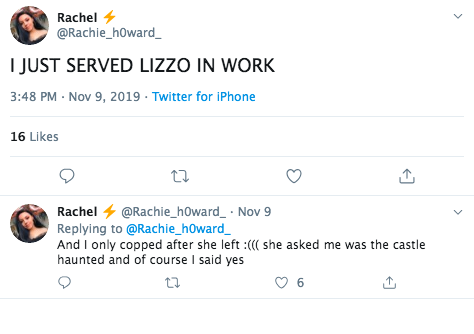 Judging by the speed at which Lizzo's Olympia show sold out, it probably won't be long until the Juice star is back at Malahide Castle performing to thousands of fans. No doubt Puck will have a front row seat.

READ NEXT: Liam Gallagher has partnered with a Dublin homeless charity ahead of his shows here

These spicy wings are so easy to make at home