Page one of how to annoy a Dublin crowd - refer to the city as part of the UK.

At Longitude over the weekend, English rapper Dave managed to achieve just this when he announced that Dublin was "the craziest place the UK" to the bemused Marlay Park crowd.

The star, who went viral last week for inviting a fan to perform during his Glastonbury set, drew a few boos for the comment as you can see in the video below (courtesy of Twitter user @jade_w2012)

Ngl my heart broke but I love you still x pic.twitter.com/oCc0MHNFBe

In fairness to Dave, he took ownership by acknowledging the error on Twitter afterwards... 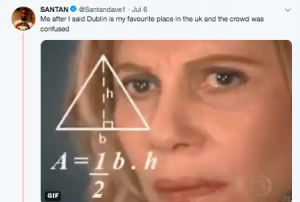 A few geography lessons might be in order before his next visit to the capital.

READ NEXT: Lizzo Has Announced A Dublin Show For Later This Year