I walked into Sova Vegan Butcher for the first time in nearly three years. The last time I was here I had been booked to do a stand-up show for a hen party of about 30 women from mostly Limerick. In the private upstairs section of this compact vegan eating establishment, it was quite hectic as I recall and the hen was BYOB so the tables were laden with cans and bottles of wine,

I still remember the disappointment in their eyes when they realised that I was a comedian and not a beefcake stripper. Definitely one of the stranger bookings I've ever taken but it was certainly a memorable one none the less, the hen party were a great audience in fairness to them.

This time I'm in Sova to eat. I had begun eating vegan earlier in the week in order to get me in the zone. I had also enrolled one of my token vegan friends (of which there are about ten at this stage). I take the few short steps off Camden Street to the restaurant, It's brightly lit, small, clean and already really busy so I'm glad I'd booked in advance. I was also glad to have a vegan friend in tow to explain anything to me, lest I be exposed as the mere ‘two-days a vegan’ fraudster that I was. The menu is small, which I like, particularly with cuisine that I'm not very familiar with. There's nothing worse than an endless menu of options, I'm extremely indecisive and the fear the person or persons with me will make a better choice leaving me with boiling food jealously.

There's a choice of two starters and a soup and six mains on today's menu. It changes regularly which is good. We opt for the ‘Smoked Carrot Salmon’ served with cashew cream cheese, olive tapenade and crostini and the ‘Grilled Tofu Square’ Roasted in an apricot and orange glaze with apple, cannellini beans and pickles. The grilled and firm in texture tofu square is meaty and has been lightly scored before roasting, the glaze is bright orange, treacly, tart and delicious, I found the cannellini beans to be a little be tasteless but the pickled red onions and julienned fresh apple work great with the tofu appetiser as do the beautifully sauteed mushrooms which are earthy and slightly nutty. 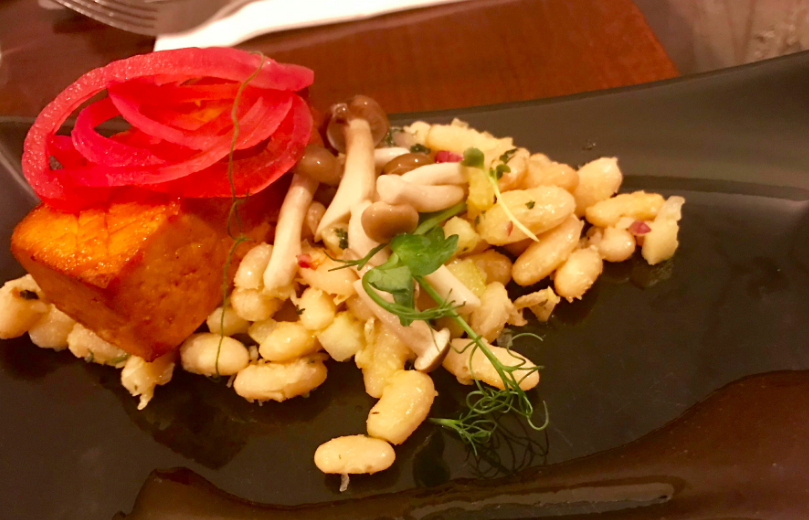 The ‘Smoked Carrot Salmon’ is something completely new to me, the thinly shaved carrot looks a little like smoked salmon and has a mild smoked fish flavour but you could never pass it off as the real thing by any stretch of the imagination. The cashew cream cheese is the opposite, it's flavour filled and the best non-dairy cheese I've ever tasted, the olive tapenade works really well and the crostinis are a perfectly thin, crisp vessel to get this into your face.

It's a top-notch starter and if you ate these three ingredients together on a cracker as hor d'oeuvres at a wedding or a party I doubt you would notice the difference.

On to the main courses, I hadn't eaten all day and I'd also been to the gym so the appetite was still strong. I order the ‘Sweet Potato Gnocci’ which comes served with sage, asparagus, rocket. cherry tomatoes and vegan parmesan. The gnocci is the lightest I've ever eaten and is half the density of its regular potato-based cousin, they are clearly handmade and they melt in your mouth, the asparagus and cherry tomatoes aren't overcooked and still have a nice bite, the vegan ‘parmesan’ is more like a savoury breadcrumb and it's works so well with this dish. It's a beautifully light fresh bowl of joy that I will definitely be attempting to make at home, it's so simple yet delicious and would make a great lunch to eat the following day too. 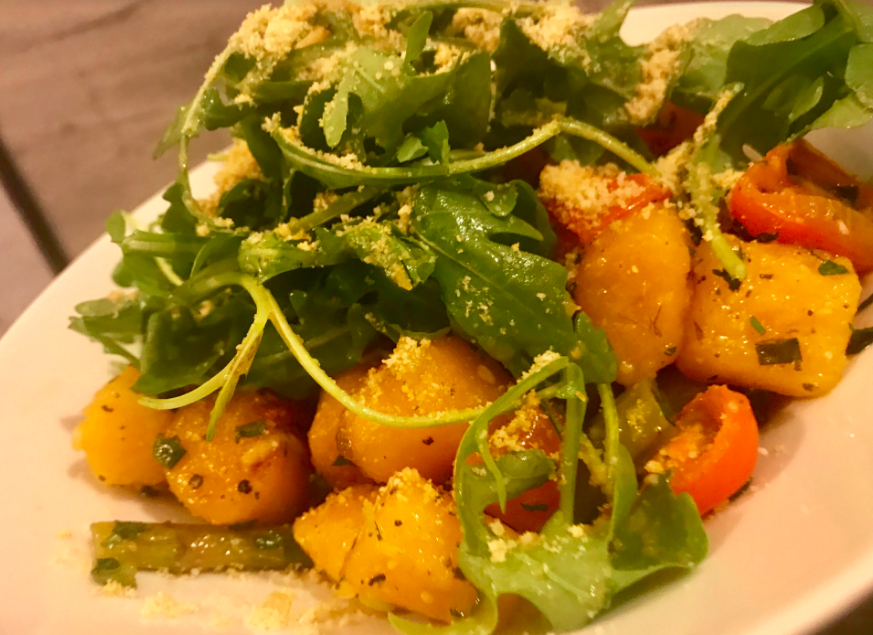 My vegan dining comrade orders the ‘Seitan Steak’ which is another first for me to taste, it's basically wheat gluten made from washing wheat flour until all the starch has been removed leaving a sticky gluten elastic mass which is then cooked before being eaten. If you're a vegan coeliac then your food choices are pretty limited and you may find yourself not getting too many invites to dinner parties! The texture of the seitan is similar to that of black pudding without all the oats (or blood obviously), it’s a hearty stick-to-your-ribs main course and I can see why it’s popular with vegans as a hearty meat replacement. The balsamic glazed beetroots are sweet, sour and sticky, the chimichurri sauce is fresh and punchy. The best thing about this dish for me is the accompanying vegan basil mash! Bright green and bursting with flavour, the next time you have a half jar of pesto or vegan pesto and some leftover mash-mix them together and heat them up, they will be married in a happy union, what a revelation! I also order the vegan bacon or ‘Facon’ as a side dish, I was so curious about this, it arrives and it almost has the texture of two thin slices of chocolate birthday cake, similar to the Seitan but cut far thinner. It smells like smokey bacon a little, but that's where the similarities end for me. It may offer a quick fix for vegans craving bacon but I think you’d be better off with some salad or hummus as a side instead. Were on to desserts. Luckily there are only two which makes choosing quite easy. We order the ‘Cheesecake Of The Day’ and the ‘Chocolate & Avocado Mousse’. The cashew-based cheesecake of the day is roast hazelnut and coffee. It’s the densest dessert I’ve ever eaten in my life, it’s proper spoon holding stuff, it’s akin to a giant soft protein ball in a glass and is more like a thick cashew mousse than a cheesecake. This would easily feed three people for dessert though which is great value - a solid dessert in every sense of the word! 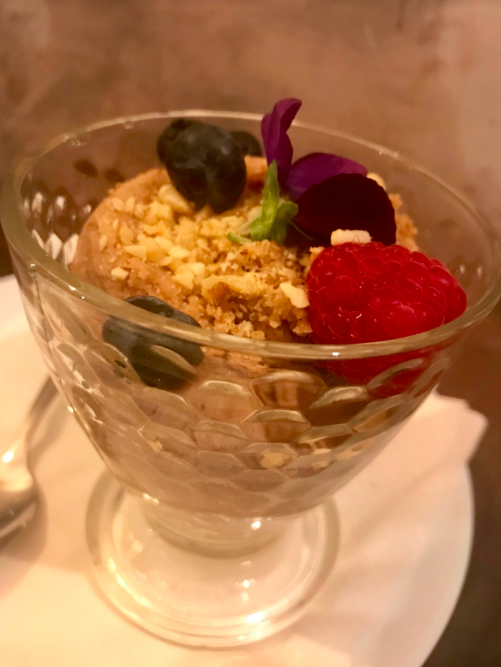 The chocolate and avocado mousse isn’t incredibly chocolaty but I really like it, the coconut shortbread is like a hockey puck of desiccated coconut, it’s really hard work to get the spoon through but it’s tasty once eventually broken! The candied walnuts, sliced strawberry and raspberry coulis all work together really well. We order a couple of mint teas to finish, they have these clear white tea bags packed with beautiful mini mint leaves which help finish off the meal nicely and settle all the food we have consumed.

This was my first full three-course vegan dining experience and I’m glad I chose Sova Vegan Butcher. The staff are friendly and helpful and the food was mostly delicious and caringly prepared. My only complaint is that our mains took quite a while to arrive (45 minutes) but I think this was due to having some large parties upstairs. This restaurant is seriously loud when it’s busy (which I think is all the time!)  and seems really popular with small groups so if you’re looking for a quiet intimate vegan restaurant to have a chat then maybe look elsewhere.

I felt the mains were a little overpriced for what you get but I understand the extra cost for vegan ingredients, particularly the seitan which seems quite laborious to make by all accounts. The Vegans may hail Seitan at Sova, but I'm just happy to have just tried it the once.