Earlier this week, the Huffington Post shared an article that listed Dublin's Temple Bar among the 10 Most Disappointing Destinations in the World (Niagara Falls and Las Vegas were also included).

Now chances are, if you're a Dubliner, you'll more than likely agree. It's a shitehole, the last remnant of an Ireland that none of us want to admit still exists. Nobody wants to have to spend time there. Any given Saturday, it's rammed with unsuspecting tourists who, once they get over the novelty of diddley-eye music, come around to our own way of thinking and want to get the hell out of there. Then you have people flogging fliers to Club M or a string of shitty overpriced Italian restaurants that are offering all you can eat for as little as 10 euro. Never a good sign; if you have to sell your food off for pittance, we know you're selling total tripe. Temple Bar probably reaches its lowest point around Paddy's Day or Arthur's Day when we too jump on the bandwagon, drunken teenagers puking their McDonald filled rings and spilling their green pints all over the place. The few restaurants that aren't shit, such as Elephant and Castle - and I'm talking mostly about the very centre of Temple Bar because there are some rather lovely parts off near Cow's Lane - are wasted on such a tacky location. 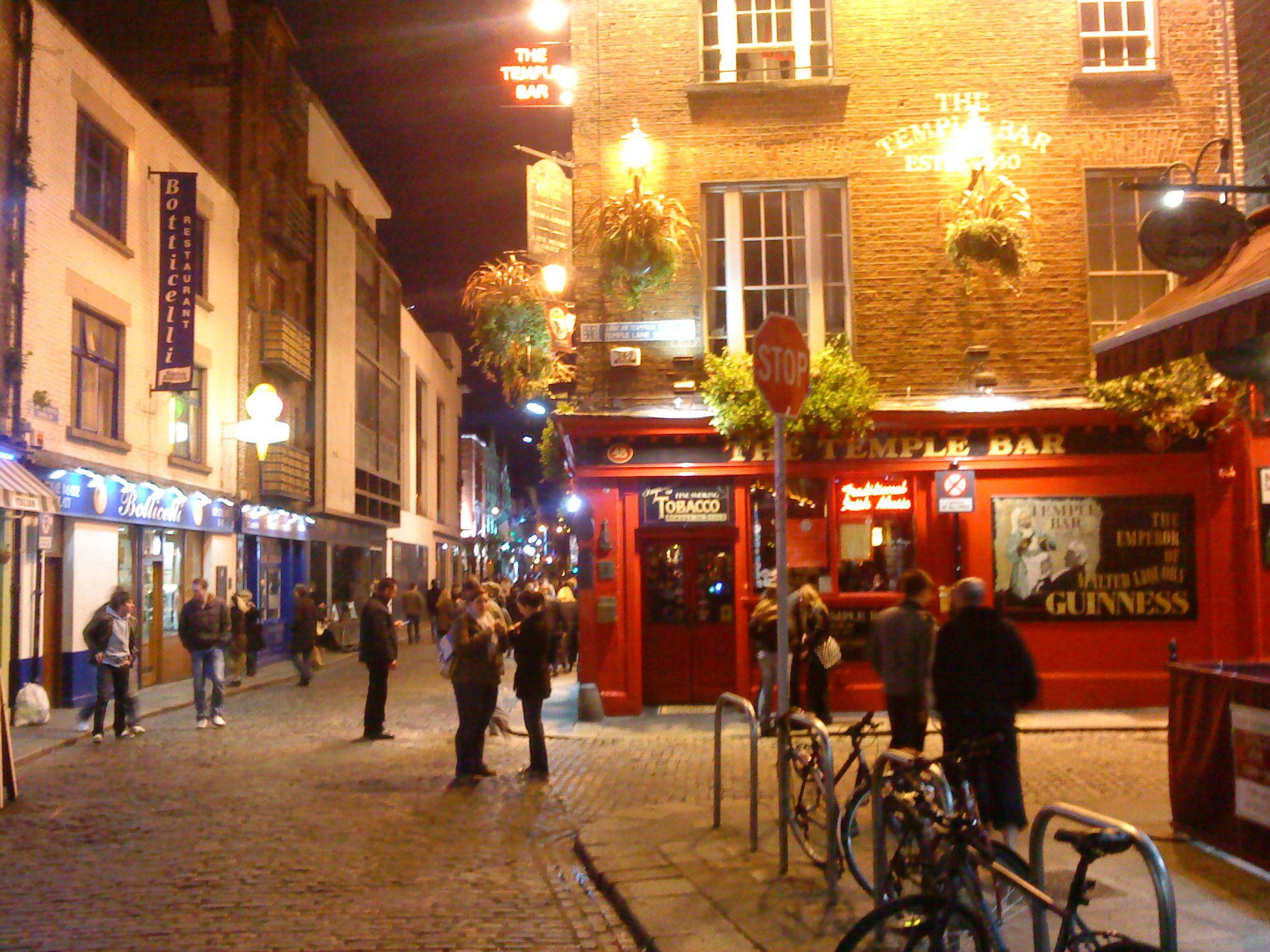 Situated on the outskirts of the hell hole that is the cobblestoned square, The Vintage Cocktail Club, Roasted Brown and Staple Foods are all examples of great hidden gems, the few sweet roses among a garden of weeds. But it's more so us Dubliners who'll brave the sea of randy, angry looking adolescents congregating around Central Bank to get to these places; the tourists might not necessarily be aware they exist in the first place. 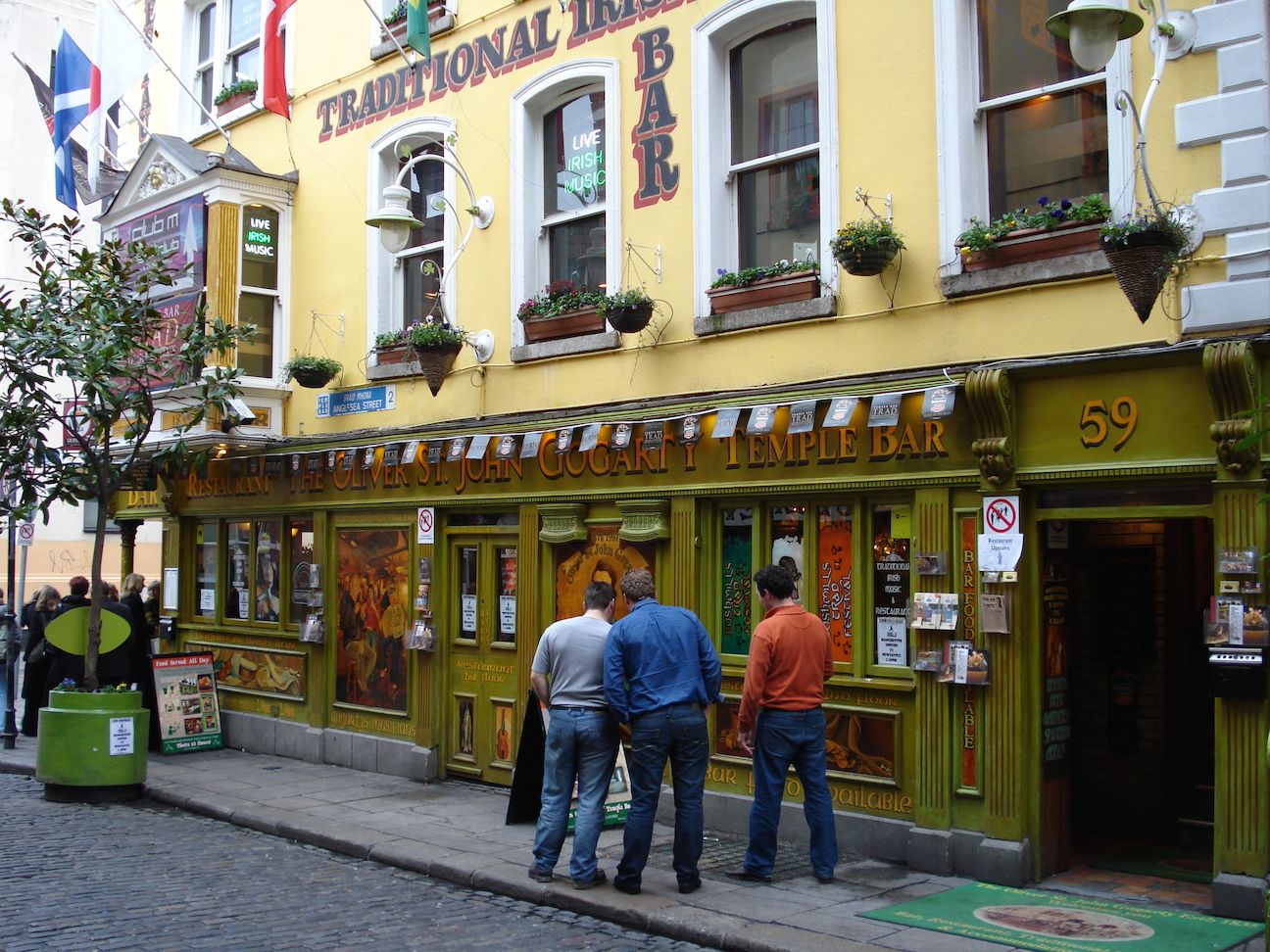 Overpriced pints will always be an issue in Temple Bar, as will scenes of drunken debauchery that serve only to reinforce the stereotypical image of Ireland created as far back as John Ford's time on The Quiet Man. Elsewhere, Dublin really has come a long way to change the impression that tourists once had of the city. At last, you really can enjoy great food and drink that won't force you to re-mortgage your house in Dublin - it's all we talk about on Lovin Dublin - but Temple Bar is still that one festering boil on Dublin's image abroad. It's the first place most visitors who've never been here before will want to go and it's the first place we'll tell them to avoid.

What's your take on it? Do you like it? Do you hate it? Are you indifferent? Are you surprised it wound up on this list?

Here's the snippet from The Huffington Post - "The city of Dublin is great. There's a castle and gorgeous architecture, there are renowned colleges and green spaces, and there are many other things to see and do that go beyond the tired "Irish culture equals pubs" stereotype. The Temple Bar area of Dublin, however, is a prime example of the rampant fleecing of drunken tourists that should be avoided at all costs. This small area caters to visitors competing to see how drunk they can get in "authentic" bars and nightclubs (aka overpriced tourist traps). Avoid it at all costs and seek out a pub literally anywhere else in Dublin for a better experience."

Pretty spot on, in fairness.