If ever the neighbourly spirit of Dubliners was captured in one video, it's in the latest one by Blank Trails.

Last week, we spoke to Blank Trails, an Instagram page set up by Fiona Barry and Keith Ward, about how they're lending a hand to Dubliners wherever they need it during these difficult times. In our interview, we learned about Otto, Fiona's elderly neighbour who was due to turn 90 on October 27, with Fiona telling us that "thinking of him spending it in his house locked away was too much."

That milestone birthday arrived yesterday and to say that Fiona and Keith pulled out all the stops would be an understatement. In a new video posted on Instagram, Fiona can be seen knocking into Otto's house before inviting him to her driveway for a big surprise. When he got there, Otto was greeted by a birthday cake as well as gifts and cards from all over the world.

The birthday boy could barely hide his delight as the level of generosity began to sink in. He even managed to get a sing-song in towards the end and you can check out the video in full below...

Don't put the tissues away just yet. After posting the video, Fiona took to the Blank Trails Instragram Stories to tell followers that Otto had subsequently presented her with a letter she wrote to him when she was 11. It detailed how sorry Fiona was after she and her sister had picked flowers from one of Otto's bushes and it turns out he had kept the correspondence to this day, telling Fiona that "I read it every so often." 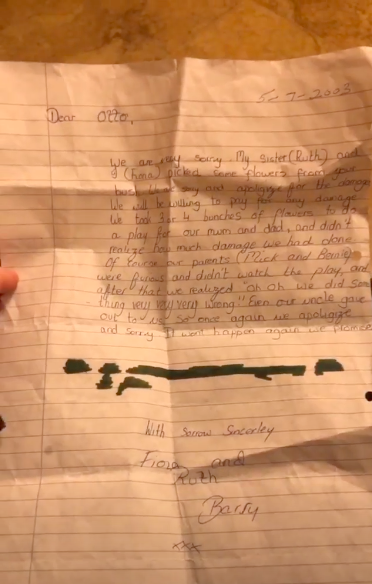 Fiona told us today that 'Otto loved the video and all the attention. He kept asking "am I famous now?!"'

In this era in which we can't move too far from home, it must be wonderful to enjoy a neighbourly relationship like the one Fiona and Otto obviously share.

We're sure you'll join us in wishing a happy belated birthday to Otto. Many happy returns!

READ NEXT: This '5km from home' tool will come in very handy over the next few weeks